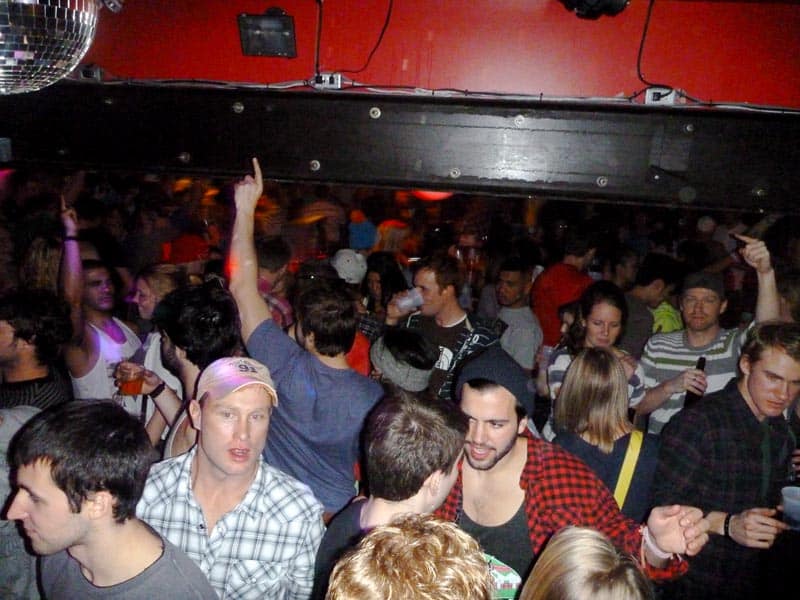 I attended The National’s NXNE show at Yonge and Dundas Square this past weekend, and while the band was great…the scene was a bit of a mess. It was a free show, which attracted a lot of less-than-invested onlookers (why come to a show if you don’t care?!) and created a really weird experience. Eric Boshart wrote a piece for BlogTO about how to stay sane at the Square, which included the very real advice: “Avoid making mental enemies of strangers to pass the time.” BUT IT’S SO HARD NOT TO WHEN PEOPLE ARE BEING THE WORST! I seriously believe that if we could all just follow some simple rules of concert etiquette we could avoid spending the majority of a show thinking about how the people around us are ruining it. And, you know, enjoy the music or something.

I listened to 45 minutes of a first date on Friday night because the people behind me couldn’t handle silence (except there was a bandplaying musicin front of them?). It was awkward and very distracting. Be cool and keep the chatter to a minimum. If you’re talking about the musicians you’re watching, for the sake of those in ear-shot, try to strike a balance between sounding like a clueless passer-by and a pretentious super fan. It’s hard to tell which of the two is more infuriating.

If I had it my way, we’d all line up according to height—but I’m a concert fascist, I guess. If you’re tall, you’ve got built-in spectator advantage over the rest of us shortos and will probably be able to see the stage from where ever you stand. So, take pity on the lil’ ‘uns, and stand further back or to the side. At the very least don’t stand in front of people who are much shorter than you are.

Weird, performative make-outs aside, sometimes couples can be a good thing, like when one person stands in front of the other and the behind person wraps their arms around the other. It may not be something you want to watch for too long, but they are taking up less space. Good for them. But seriously, no super long make-outs please.

Is the crowd vibe’n with you? Are we ALL pushing? Then great, push away, my grumpy pal; Let all that rage rush out! BUT if you’re the onlyone rearing for a push-fight at the show, then you’ll have to take your anger some place else. Like an underground fight club for pop folk enthusiasts.

If you’re a big fan of the band, it’s best to get up close and just endure the screaming and pushing, because at least you’re surrounded by people who like the band as much as you do. There is nothing worse than being stuck at the back with disinterested doinkers who don’t care about the songs they’re hearing. And if you are a disinterested doinker (because sometimes it happens) leave room for the pretentious super fans at the front; they need this more than you do.

Is there ever a right time to yell: “WAOOOOAA!”? Yes. And it’s in the middle of a sweet guitar solo or when the lead singer says something poignant like, “HOW YA’LL DOING TONIGHT?!” It’s not during an acoustic set or a sentimental moment. And, if you feel the need to scream a lot, ask yourself: “Why did I come here? Was it to listen to my own shrieking banshee noises? Who is this night really about? Am I displaying attention-seeking behaviour?” (FYI: These are good questions to ask at any social event.)

Has the show already started? Then stop. Don’t move. Stay where you are and accept your poorly timed fate. There’s nothing worse than a group of people stringing themselves through the crowd and slowly weaselling their way to the front, during the middle of a show, using the exasperating, “We’re just looking for my friends—sorry!” excuse. Arrive on time or deal with the consequences, buddies.

Every concert and crowd is different; some are more aggressive or wild than others. You get it. Be polite and know that the people around you are probably just as emotionally invested in the performance you’ve come to see as you are. Let them be moved. (And not by you pushing your way to the stage yelling, “THIS SONG CHANGED MY LIFE!” And if they’re being jerks, you have my permission to shush, stare, and nudge them into submission.