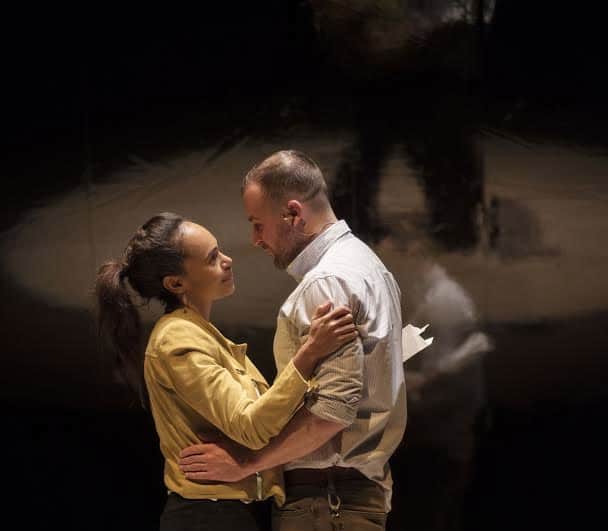 Constellations Is the Love Story Sexy Nerds Have Been Waiting For

Ever wonder what would happen if a cute beekeeper fell in love with an adorable physicist? Well, Constellations brings you that story told several different ways…

Currently on-stage at the Bluma Appel Theatre, Constellations is British playwright Nick Payne’s 75-minute play that examines love and romance through the lens of quantum physics. Directed by Peter Hinton, it’s a theatrical thought experiment that takes two people, then explores numerous different ways for their relationship to grow and evolve.

When a befuddled beekeeper named Roland (Graham Cuthbertson) and a brilliant Cambridge physics prof called Marianne (Cara Ricketts) meet at a barbecue, a sliding doors story of modern love begins. It’s kind of like the actors are reading a “choose your own adventure book,” and choosing a different adventure every scene.

Constellations posits that we are living in a multiverse, where every decision you make changes who you are and what follows. In some realities, the play’s protagonists, Roland and Marianne, become the loves of each other’s lives, whereas in others they never get to a first date. The characters are ostensibly the same from scene to scene, yet it’s really only their jobs and names that remain truly constant. Depending on myriad decisions they make – and how they react to them – their tones, attitudes and destinies are in constant flux.

Sentimental yet challenging, Payne’s play is a thought-provoking story about love, though it is certainly not a traditional love story. It forces the viewer to reckon with his or her own relationship histories and ask uncomfortable questions, like whether you might have met your perfect person at a party, but your love story never began because they happened to be in a relationship at the time. In short, it’s somewhat discomforting to watch, but it’s supposed to be.

With a single space-themed set as interesting as its many stories, Constellations will delight and horrify romantics everywhere with its nerdy meditation on romance. Thanks to solid performances by Rickets and Cuthbertson, our leads’ interactions may be intentionally repetitive, but they are never boring. The score, brought to life courtesy of on-stage cellist Jane Chan, brings atmosphere and whimsy to a story that is often dark and occasionally upsetting.

Ultimately, Constellations is a play that isn’t always romantic, but instead captures the nuance, complications, awkwardness, and terrifying randomness of romance. Screw The Big Bang Theory! Constellations is the love story nerds everywhere have been waiting for, whether we knew it or not.

Constellations is playing at the Bluma Appel theatre in Toronto until November 27th.