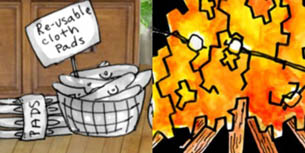 Crankytown.ca uses the internet to provide a safe space for girls to talk periods, PMS, and more

My most horrifying period memory is from summer camp, being a tampon novice, and having to jump in the lake in a maxi pad and pray it didn’t go floating away behind me. As such, it seemed incredibly appropriate that the ladies of Crankytown have chosen a bonfire as the place around which to share the trials, triumphs, and tribulations of first periods.

Like a summer camp dreams are made of, Camp Cranky brings together cool girls telling their stories, a nurse with all the facts you need to sail through your first period like a pro, an Outhouse scribbled with poetry about everything from PMS to missed periods, a tuck shop that will tell you everything you need to know about different options for protection (did you know you can use a sea sponge as a tampon?), and, most importantly, a link that will allow you to sponsor a period, and send HURU kit to a girl in a developing nation. We spoke to Camp Cranky’s creators, Liane Balaban, Jenna Wright and Vanessa Matsui, to talk about the project, muppets, and buying your Grandpa a period for Christmas.

She Does The City: When did you first hatch the Crankytown scheme?

Vanessa: Crankytown was born when Liane had a bad bout of PMS.  She stopped sobbing long enough to write a silly poem, and it made her feel much better. Then she thought, what if this could help other women? She sent an email asking for submissions of PMS poetry for an anthology to raise money for charity.

Liane: Vanessa came over a few weeks later and mentioned a new NFB intitiative called First Person Digital, that was looking for submissions for women-centered web projects. I thought my poetry book should go digital, and brought Jenna on board to brainstorm with me and Vanessa. The book idea blossomed into a virtual village (Crankytown.ca) as we worked on our proposal.

Jenna: We thought Crankytown the village was too broad and ambitious to start with, so we narrowed it down to one area; Camp Cranky, an all girls camp where you could learn about and share your experiences of menstruation in a fun and informative, straightforward way. Crankytown was this idea of a place where you could have the support of other women when you really needed it. Like a community, but using the global village of the Internet to make it accessible to women and girls everywhere.

Tell us about each of your first periods.

Vanessa:  I think I was twelve. I remember seeing some blood on the toilet paper after I went to the bathroom one morning. I had a very busy working mom so mornings were hectic chez nous. She gave me these ENORMOUS thick maxi pads.  I was mortified and thought that everyone at school would hear the “swish swish” like a diaper when I walked down the hall. I was crying and fighting with her. My period didn’t return for like a year. Then one afternoon it came back when I was watching Oprah.  But I was prepared with better pads that time.

Jenna: I was 15  and had resigned myself to the fact that I was never going to go through puberty. I was totally flat chested, and had just found out that my grandmother, whom I looked to for reassurance that I would one day  inherit her grand  bosoms, had had breast implants in the 70s. I was mortified that I would never get it. Funny thing is, when I got it, I was all, “yeah, no big deal, I’ve got it too” pretending like I had it forever because it was cooler that way. Grunge music was in. We’d just wrap a plaid shirt around our waists like Eddie Vedder: protection and cool all in one!

Liane: I got my period when I was 14. I was on “vacation” in Israel with my father, living in my grandmother’s house. I put vacation in quotes because coming from the suburbs of Toronto, the living conditions in Haifa were pretty rustic. I was totally unprepared for both Israel and my period. I had randomly thrown a couple maxi pads into my suitcase, and let’s just say I had to make the final one LAST. I was miserable. And didn’t say a word to anyone. I had no friends, no one to talk to. It was hell. Oh, and to top it off, my period lasted TWO WEEKS. And guess what? At the same time, I got SCABIES from my grandmother’s MATTRESS. Jews don’t understand how I could possibly have gone to Israel and not fallen in love with it. I created this blog of my vacation photos to prove how miserable I was: http://lianeinisrael.blogspot.com/  This is a girl with a fetid maxi pad and parasites.

What is it about that time in a girl’s life that really solidifies the need to connect with other girls her age-whether at home or around the world?

Vanessa: Great question.  I think at that age you are just more comfortable talking to your friends than to your mom or older people.

Liane: Yeah, it’s easier to relate to your peers, who are undergoing the same changes and experiences. As an adolescent I felt very uncomfortable discussing menstruation with my mother. She actually called pads “sanitary napkins,” and I felt like barfing whenever she called them that.

Jenna: There are so many things changing at that time and it can be really scary, or embarrassing, ’cause you don’t necessarily know the end result. So you’re living this guessing game with the things your body will do! And since everyone is different, I think it can be reassuring to know that other people are going through these changes with you.

You’re sort of becoming the adult person you’ll be, but still with a foot in childhood. So I think it’s comforting and easier to talk to your peers. Adults, no matter how cool they are, can sound so embarrassing talking about puberty.

When did you decide to incorporate puppetry into Camp Cranky to tell some of the first period stories?

Liane: Jenna is a genius art director / costume designer/ set builder / improviser and had been talking about making a film with puppets for a while. Puppets seemed like a natural choice. We built everything (the sets and the puppets) from scratch. Watch the puppet videos here: http://vimeo.com/16588355

Jenna: It was really hilarious shooting them. Believe it or not, that string of laundry (the panties that go by in the background of the Meenokshe video) was one of the hardest things to coordinate! Liane and Vanessa where running around like maniacs back there! Vanessa’s hands were all painted like henna, and she had to stand under a hot lamp melting!

Have you connected with any young women, in Canada or Nairobi, who have participated in the Sponsor a Period program? What were their feelings about it?

Vanessa: Yes, my younger cousin Mary Ellen sponsored a period and gave it to our Grandpa for Christmas!  She thought it was a great idea!  My grandpa was like, “what is it?”  And she told him.  I think it is a real eye opener when people learn that often when disaster relief teams go to disenfranchised zones,  pads or tampons are not included in the survival pack.  It is just something that is not viewed as essential even though 50% of the population menstruate.  We hope to help change that paradigm with Crankytown.ca.

Liane: It feels really good to sponsor a period. You can do it right now by visiting www.huruinternational.org

On the site, Salome’s story is a tiny soundbite we obtained via Huru International. A field reporter interviewed Huru kit recepients in Kenya, and asked the girls to talk about their first periods for us.

What are your hopes for Crankytown?

Vanessa: We hope to do for periods what Eve Ensler did for Vaginas.  We also hope to empower the next generation of girls to produce and direct films.  Specifically we are planning to create an app for tweens and teens to track their period, a film competition for girls to create a video similar to what we made (but they have a choice between a celeb first period story or their own period themed story). We want to make the site more interactive by allowing people to post, comment and make stuff (people have already been submitting poetry to us), and we want to  keep making videos and collecting stories.

Jenna: We’d like Crankytown to help get a dialogue going amongt girls, in a positive and inclusive way. We’d like to help demystify menstruation,  and debunk a lot of the silly taboos that seem to go along with it. We also hope to educate women on the environmental impact of their menstrual product choices, as well as about how different cultures deal with and view menstruation, in both modern and historical civilizations globally.