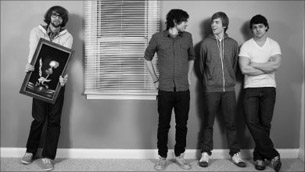 Crimes in Paris talk Settlers of Catan, looking Thom Yorke in the eyes, and upcoming shows

Good and sweaty from a nice jog at the West End Y, I take up my position poolside as the Aquafitters strap on their noodles and floaties.  It’s 10am and not only am I awake, but so are Rudy Olsson and Rayce Veitch of Crimes in Paris.  Speakerphone activated and awkward hellos taken care of, Rudy and Rayce regale me with a story or two.  Read on, dear music lovers, for singing to stuffed animals, Santa’s Village, Sufjan Stevens and Settlers of Catan (+expansion pack), and check out Crimes in Paris Thursday January 20th @ Lee’s Palace, and Wednesday January 26th @ Drake Underground.

Describe for me the best show you’ve ever played
The CD release show at the El Mocambo – we packed it, got a lot of support.  It felt really good.  We’re from a small town called Bracebridge (As is Santa Claus, I am told.) and we ended up playing with two other bands from Bracebridge.  A little Bracebridge reunion.

What’s the absolute best reaction you could get to your music?
Any sort of good review – to hear something positive and genuine about our music.  To have Alan Cross compare us to Elliot Smith and Death Cab for Cutie – incredible artists that you really respect.

If you could score a film, which film would you choose?
There’s a song on our album called Into the Sea, so Pirates of the Carribean 4.  The whole album is actually about Johnny Depp (kidding).

Which five cities would you include in a fantasy tour?
London, Berlin, NYC, Paris (we have to go to Paris), Toronto.  And Bracebridge (bonus city permitted due to loyalty/nostalgia/etc).

Where/what does your name come from?
It’s from an Elvis Costello song called Crimes of Paris. But that’s already a band.  (!)

How do you take your eggs?
Rudy:  Sunnyside up, pepper, worcesterchire sauce (how do you pronounce that?!).
Rayce: I’m always determined to make sunnyside up, but they always come out as scrambled eggs.

What is your ideal rainy day activity?
Settlers of Catan.  We settle on a pretty regular basis.  That’s including the expansion pack, mind you.  And XBox.  NHL 11.  90s movies.  90s horror movies.

What is your favourite childhood television series?
Dinosaurs, Ninja Turtles.  We’re all huge Ninja Turtles fans, still, including the live action films.  Under the Umbrella Tree.

What’s your best concert(-going) experience?
Sufjan Stevens at Massey Hall last November.  He played two hours of new music before he played anything else, and he still held the audience.  Radiohead at the Hummingbird when it was still the Hummingbird Centre.  We were front row centre.  To have Thom Yorke look you in the eyes is terrifying.  When we were all in high school we saw NOFX, and they hadn’t been to Canada for four years.  They played The Decline (which rings in at 18 minutes, 23 seconds), and it was the second time they’d ever played it live.

Where is your favourite place to sing?
Rudy: Anywhere.  More when I’m around stuffed animals.  I was actually singing for twenty minutes before you called, to Quatchi who is a Vancouver Olympics stuffed animal with earmuffs.

You have $1000 and ten minutes to spend it.  What do you do?
Probably try to pay the next two months of rehearsal time.  We also have gambling problems… And we’d probably eat breakfast.  We haven’t eaten yet, we’re usually not up this early.

Crimes in Paris plays this Thursday at Lee’s Palace with The Wilderness and Modern Superstition.  They’re at it again next week (the 26th) at Drake Underground.

Listen – to the whole album, and download it for free! – http://crimesinparis.com/CRIMES.html