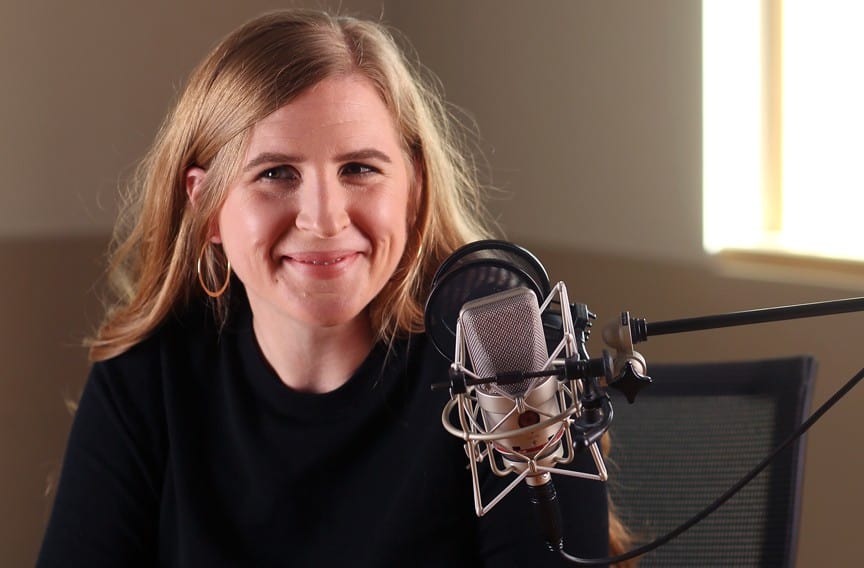 Criminal’s Phoebe Judge is the co-host of This Is Love, a new podcast that uses “true crime investigative techniques to dissect matters of the heart.” The series focuses on a different relationship with each episode, and the stories told are at turns funny, gut-wrenching and heartwarming. We asked Judge about the series, how love and crime are similar, and what it feels like to be a podcasting superstar.

SDTC: How’d you come up with the idea for This Is Love?

PJ: I think four years ago when we created Criminal, we always had an idea that at some point we’d want to do a show that wasn’t about crime. While we were totally interested in crime, there are a million other fascinating topics in the world that we wanted to explore.

After four years, we thought to ourselves that now is the time to try something new, to stretch our wings a bit. What are other topics we can explore the broad definition of like we’d done with crime? Well, love. That would be exciting to us because we could push boundaries again of what the word means. We decided to do it.

What do stories of true love and true crime have in common?

Just that they’re so varied. There’s no one thing that makes something a true crime or true love story. These are just stories about the human experience in some way.

Why do we enjoy the postmortem of each?

I think we’re just interested in how they can help shape and inform our own lives and experience. All we want to do is figure out why people do the things they do. What gets them to that place? I think people are genuinely curious about others, and about other life experiences. So we want to learn more.

A lot of times, topics like love and crime are taboo in some way. They’re not talked about widely. They’re private. That’s why I think people are so intrigued by them. Because all these things touch on our own lives; we might not have direct experience with them, but we’re curious because maybe they could happen to us.

How did you select the stories?

So, of course, we had some relationship stories. We also had stories about a woman’s experience swimming with a baby whale, and a family starting a restaurant. We wanted to surprise the listener, so that meant thinking about different geographical regions, male and female speakers, different races, different backgrounds. We wanted to have a really broad range of experiences.

Why do we long for genuine love stories now?

I think people have always been longing for love stories; they make us feel good. They make us feel connected in some way. This is a time in the world when there is a lot going on. There’s a lot of bad news. We were happy to create a show that made people feel good.

Voice is so important. Is that something you’re conscious of when you’re selecting subjects? Have you ever turned down someone because they sounded irritating?

[Laughs] We’ll take any voice as long as they can tell a good story.

Is it weird for you to be a podcasting star? Have you been recognized?

I have been recognized a few times on the telephone, and it’s always very funny and surprising to me. I don’t think I’d ever call myself a podcasting star, but I’d rather be a podcasting star than a television star, [because] you can go undetected in the world. When someone does recognize your voice (it rarely happens), it’s a lot of fun.

What would you do if you weren’t making podcasts?

I’d probably be a fisherman [laughs]. I love to cook. I just went on a police ride-along for Criminal, and it made me think that I might want to be a police officer.

What do you love about the medium?

I love that there are no rules. Before Lauren Spohrer and I created Criminal, we were both working for a public radio show. So you had to tell a story in seventeen minutes, [or] in twenty-four minutes, and there was no getting around that.

There were also editors. Now we are our own editorial board. We tell the story in as long a time that it needs to be told, which is actually very short because we don’t want to waste anyone’s time. But the freedom of it is what I like so much.

How do you see it evolving?

I think it’s going to keep growing. I mean, look what’s happened to podcasting in the last four years. What we do know is that people are moving towards this on-demand entertainment and, in this world of media and graphics and video and more advanced television systems, are still drawn to just the sound of the human voice. I’m so heartened by that—that this is still speaking to people. I don’t think that’s going to change.