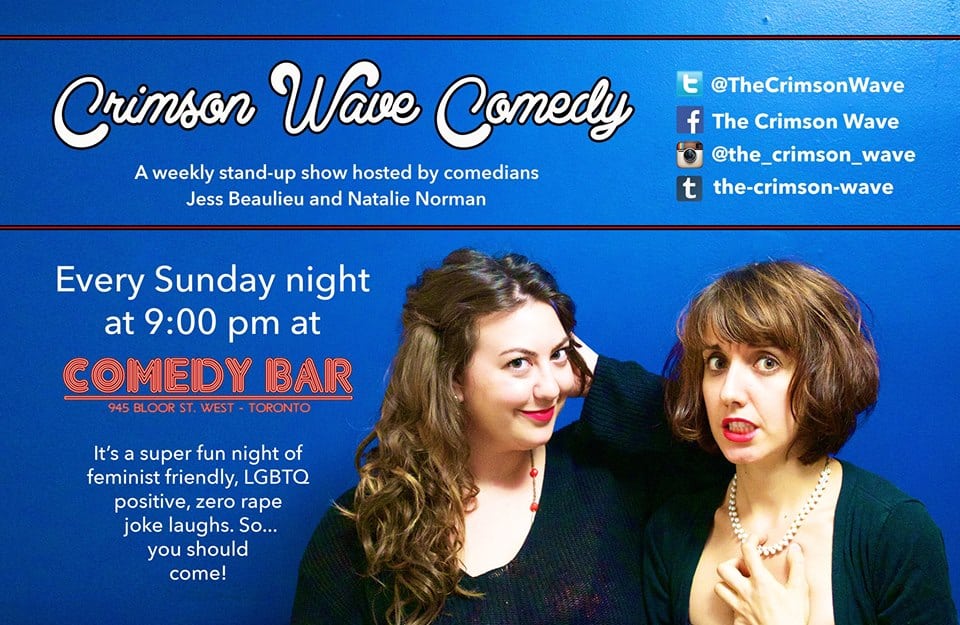 The Crimson Wave Is Comedy For Feminists And We Like That

Comedy shows, guys. A lot of the time they turn from being “haha fun time” to “sorry, how many rape jokes do I have to sit through to enjoy this casual beer and some laughs with my friends?” It’s hard out there for a feminist who likes funny but doesn’t want to hear 12 ways some guy’s girlfriend is soooo lame and also isn’t light misogyny hilarious?

Enter: The Crimson Wave. Hosted by Natalie Norman and our very own Jess Beaulieu, this is a feminist-friendly night of comedy with a no rape jokes policy and a feminist- and LBTQ-friendly vibe. Unlike their podcast of the same name, the show is not oooonly period jokes, but if we’re honest there will probably be a few period jokes.

The show runs weekly, at Comedy Bar on Sunday nights at 9:30. The inaugural show was last week and was a storming success, with a packed room and a stacked line up. The line up this week looks just as great, and there are two lotto spots for comics or aspiring comics who want to get in on the action. We’re surfing this wave til we’re dead, bye!