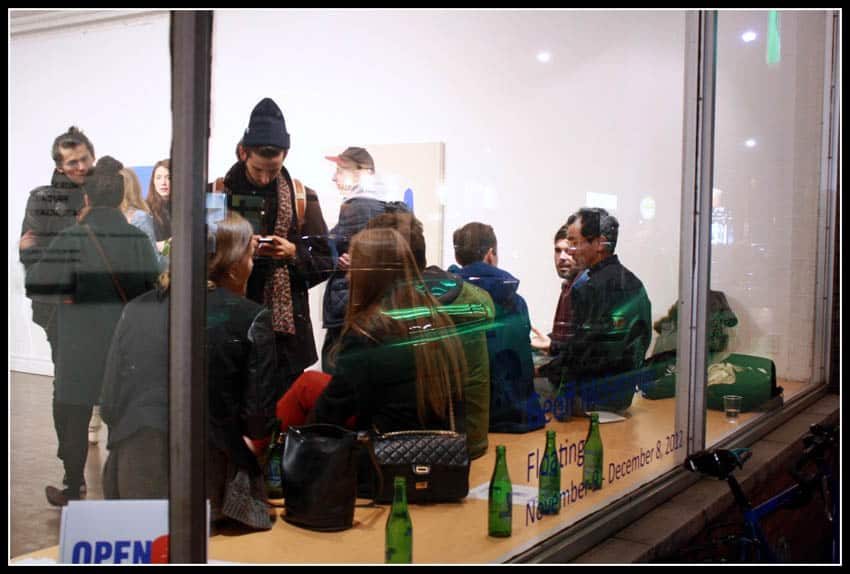 As this was my first ever art gallery reception, I tried to guess how the crowd would be dressed and ended up wearing a floppy safari hat, a bird’s claw pin and also my glasses. I looked like Annie Hall, if she had been a misinformed Orientalist with terrible vision.

The audience was mostly made up of humans in their late 20s/early 30s, but also a dog, and a baby. Uma Thurman from Pulp Fiction, butwith peroxide blonde hair, showed up. I also saw: the sametoque on many different heads. A woman in a wallpaper dress standing alone forever against a white wall. Two men wearing the same pair of Vans. (Were they embarrassed? I’ll never know- their bearded faces gave nothing away!) The hint of boney ankles & wool socks underneath cuffed jeans. A person wearing slippers who wanted me to think that they were a slob, but I knew the truth. Pals who dug each other’s music. A leather jacket on top of a jean jacket (the ultimate layering combo!?). A David Byrne/mountain man dad. Long-butt-high-waisted jeans. Twins. A man blowing a burp into a woman’s face. People ignoring a baby and a dog at an art gallery, even though c’mon, wut u doin’ here, baby and dog?

The bathroom was really nice and I would definitely use it again. There was a large mirror that proved disappointing but only because of the content, which was predominantly my hat. There was a little gum ball machine that gave out something cool, probably. It was spacious and clean and people didn’t rush me. I think if you have to pee and you’re waiting for the street car on the corner of Dundas and Ossington you should try to use it. Go forth with relaxed confidence and you’ll be fine. That might be the theme of the night.

Ultimately, it was a pretty good scene. I felt slightly intimidated by the crowd but they weren’t too pretentious, just super cool people looking a bit derelict and slouchy. Despite what 1920s detectives would have you believe, it’s very difficult to eavesdrop while wearing a hat and my glasses made the lights seem hazy even though I had just washed them. The few conversations I overheard were personal and not about the exhibit. It seems to me that everyone was saying “I feel like…” and that no one really said “I think…”

What can it all mean? I feel like I think we don’t think about much anymore. It’s easier to “feel like” than “think.” Opinions can be tough to form! Judgement can be hurtful! “Feeling like” is expressive but noncommittal! I feel like maybe that’s not so bad. Maybe that’s the point of Crowd Review anyway. The look, the feel, the being there, I think.

Crowd Review: 3.5 out of 5 Indoor Toques