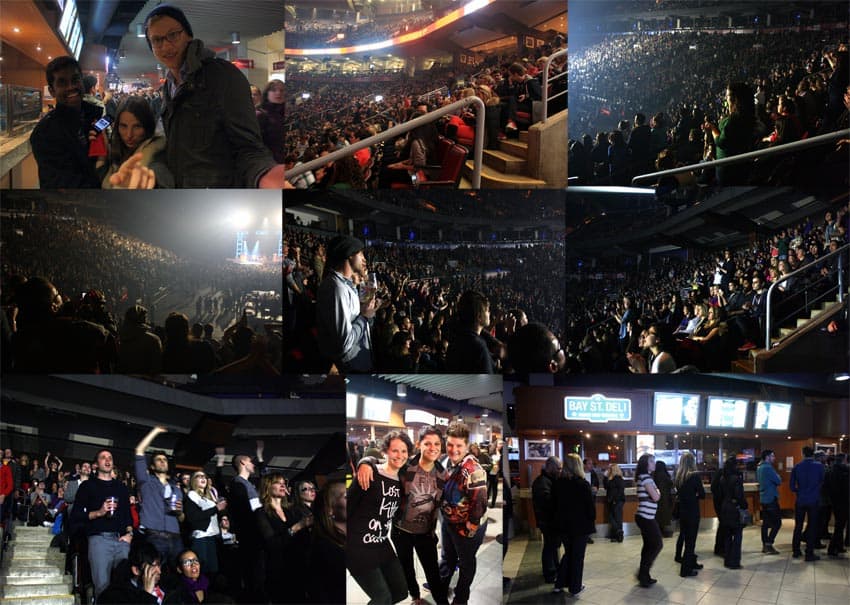 Some people hate large venues like the Air Canada Centre because they create an unfeeling, commodified environment. I love them because I have a very high resting heart rate and am a big fan of sitting. People don’t share sweat in a struggle to the front of the stage like they do at smaller venues; in this way stadium seating at the ACC fosters a sense of anonymity. Some intense activity probably occurs down in the standing section (I definitely saw at least one Electric Circus-esque dancer taking up way too much space) but up in the auditorium everyone gets to choose their own level of ‘rocking out’.

Because the venue was so large it’s hard to speak generally about the crowd. There was a huge age range represented, though the majority of the audience were in their early twenties to late forties. The fashion spectrum was equally spread: I saw bedazzled, shoulder-hole tops, plaid pants and a hand knit Maple Leafs sweater. The people who sat directly in front of me were a family of four. I loved them. The father stood and recorded the entire three hour concert on his camcorder. It reminded me of the time my family went on a cave tour in Montana and my Dad videotaped the whole thing. In the dark. With night vision on. We never watched those tapes but if we had I imagine there would be a lot of glow-in-the-dark eye rolling coming from 14-year-old me. But at the Metric show the 14-year-old daughter in front of me recorded every other song on her camera and didn’t say “Whatever, Dad” once. Her mom had printed out the night’s set list and would do dippy shoulder dances every time she recognized a song. The son had just learned how to do ‘rock on’ hand gestures and became increasingly comfortable with them as the show went on (see picture). They were all so happy doing their own thing, together.

And that is what I took away from the Metric crowd: a personalized yet communal concert. Some people bought licorice and pop and settled in for a theatre-like experience, others doubled up on over priced beer and swayed along to every song. It was funny to see that certain sections of the crowd were ‘stand the whole time-ers’ while others stood begrudgingly when the people in front forced them to do so.

It’s true that the venues like the ACC can create a somewhat mechanical and formulaic event: one where we wait in long lines for the bathroom, scream when the lights go down, applaud for an encore and then stream out as soon as the canned music starts. But I couldn’t help but feel the sounds and movements all around me came from a place of real joy. Ultimately a thousand fans were bound together in the communal clap, countdown and acoustic encore. Wide eyes of acknowledgements were shared between friends, lovers and strangers as they belted out lyrics into the darkness. Fist pumps and ‘WE LOVE YOU EMILY!’s abounded. You couldn’t help but smile.