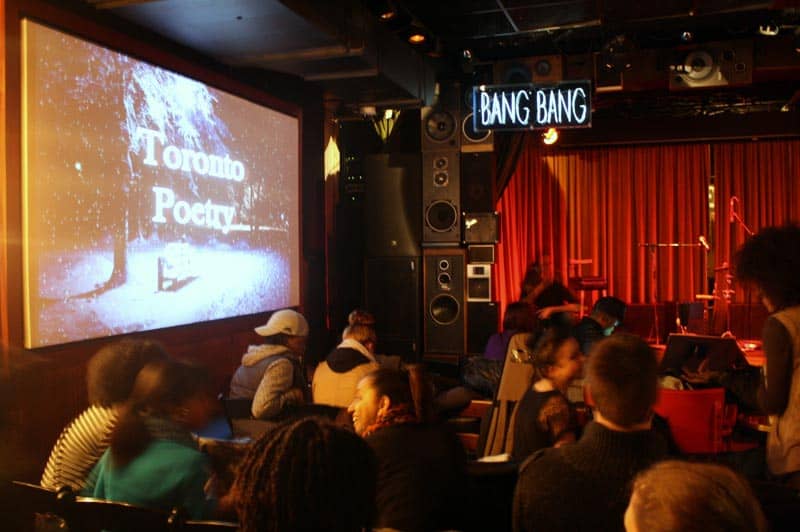 "If you're the only one mewling all over the place then hush yourself."

I’d never been to a legit poetry slam before and in my excitement we arrived early enough to get good seats. The place filled up quickly and the lack of seating split the crowd into two groups: mostly frantic searchers and a few super chill people who I heard say something I’ve never said in my life: “Oh, that’s cool, I’ll just stand.” Wow. Super chill.

When the show started the crowd was encouraged to support of the night’s “slammers” by making intermittent snapping and assenting “uh-uh, hmmm-hmmmm” noises. Most of those noises were great additions to the atmosphere and unobtrusively indicated that people were truly listening to the performers. But there was one noise, coming from just behind me, that wasn’t so great. A whining “Awwwwww” noise, Fran Drescher-esque, in my ear. A real nasal “Oh you poor baaaaaaaaby” sound. Many of the night’s poems were quite somber and, empathizing with their content, I sighed a few “aw’s” myself. But the woman standing behind me vocalized every single one of her reactions. Affirming utterances were encouraged, but these sounds weren’t overly supportive. They were vacant, possibly drunken, demonstrative sounds that drew attention away from the true performers.

And now a quick treatise on audience racket: It’s important that a crowd be receptive and reactive during shows… a taciturn crowd makes for a passionless event. That being said, here is how I feel about that woman: THIS ISN’T ABOUT YOU. SHHHH. I am tired of performative audience members. Their reaction is no more important or deserving of attention than anyone else’s. Like the guy who laughs unnaturally loud and long at a comedy show until you’re forced to concede that, sure, he must be enjoying the jokes on a level far above your own understanding or the “WOOO! WOOOO! WOOOO!”er at a concert who demands you look in the opposite direction from the stage… the “aaaawww” woman was distracting me from enjoying the performance I had come to see.

And sure, in many ways, it’s ALL about YOU (I say to that woman and woo-ers in general). You found an artist, venue or community that you love and feel excited about and want to express those feelings… You’re connecting with the music/song/show in such a way that you can’t contain your emotions and have to shout or sing or “aaaaaawwwwwwwww” all over the place. But please don’t forget that there are other, just as excited and just as emotional, people all around you. They could easily make enough noise to ruin your night, but they’re not. Respect them. Recall the Golden Rule. Feel the vibe of the crowd. If you’re the only one mewling all over the place then hush yourself.

The rest of the crowd at the Drake Underground was energetic and passionate, willing to cheer on the slammers and loudly boo the judges. Maybe slams invite performative audience members, and maybe that one woman was just a bit tipsy and was feeling unusually comfortable and wanted to make various noises into my ear all night long. It would be wrong to say she ruined the night, because she didn’t. She just left a weird buzzing in my right ear. The other ear was full of the sounds of laughter, applause and snapping all combining to make for a pleasant evening.