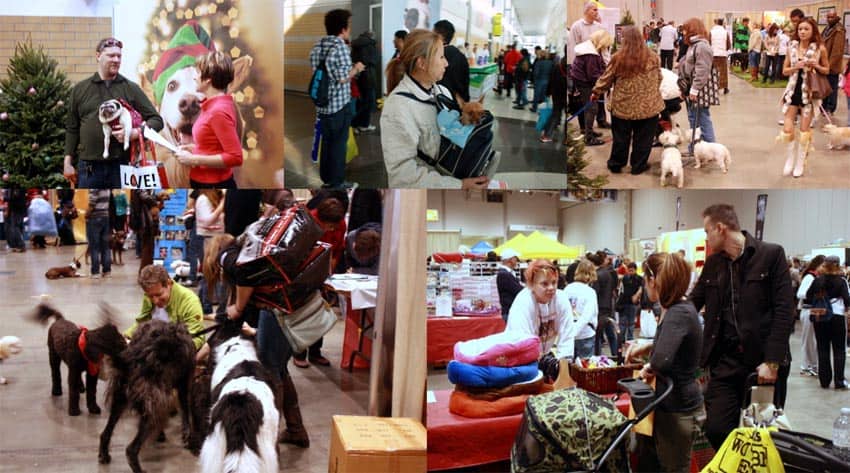 Admit it, you often pay more attention to the people at an event than the event itself. Crowd Review is a new SDTC column that reviews the atmosphere, audience, and sometimes odour of various Toronto scenes.

When I said I’d cover Winter Woofstock for Crowd Review I clearly wasn’t thinking. Was a dog “shopping experience” really the place for a young couple who had just lost their beloved hamster*? The answer is no. The mass of fur and tiny noses that greeted us as we entered the space swallowed me up in “I need a puppy” fever.

Some of those people and their dogs did exist. I saw many dogs being wheeled around in baby carriages, dogs taking photos with Santa, dogs in costumes and even a woman who had (inadvertently?) dressed like a dog (never wear fur to a dog show). But generally the people at Woofstock seemed pretty relaxed, kind of like a bunch of neighbours in a mostly white, middle class neighbourhood just hanging out, talking about dog stuff.

I wondered why a person would come to Woofstock. It was a mess of people trying to navigate a tangle of leashes in the space between stalls and smiling all the while. It comes down to the obvious: these dogs were treated as members of the family. Just like, as a child, dragging your parents to the local Trade Show every year even though seriously, Lisa, there is nothing to see there but men selling trailers, electronic fences, shingles and fudge. We went because it was a social event, everyone in the city went, it was a chance to see other families and mill about and smile at each other. (Growing up in Fort McMurray was wild, guys.)

It was that same sentiment on display in the friendly faces that would reach out to pet other dogs and chat about their favourite dentist- approved chew toys and preservative-free chow-chow. It was a community of parents and siblings, some proud and some sheepish, who toured through the maze of stalls to stop and look at other dogs. The ‘awwwwww it’s soooo cute!!’s abounded, but I also heard I heard a few mumbled “Ew, I hate that dog”s or “That is an ugly breed,” things we would never say in public about other people’s children. Ultimately people walked away from these encounters loving only their dogs. Just like how my parents must have felt about me every year at the Trade Show. Except for the time I ate too much maple fudge and threw up on a meat grinder display. Every other time I was great, probably.

Woofstock was populated with some of the best behaved dogs I’d ever seen. The majority didn’t bark too much or poo everywhere like I thought they would. That being said, some did. And we heard about it. Giving animals human names creates only the best comedic potential and listening to an older man pleading with his dog, Melissa, was probably the highlight of the day: “Melissa! Melissa! Sit! Goddamnit Melissa, come on now!” Melissa peed everywhere.

I overheard a salesperson explaining to a young girl who was holding on to a black collar that “We give girl-dogs more exciting, colourful collars, does that make sense?” The feminist in me was annoyed. Then I noticed the specialized collars and leashes on the majority of dogs at the show. People were gendering and individualizing their dogs, creating a sense of “fashion” to indicate personality. And why not? They’re another member of the family. And they’re not trying to break free of the tyranny of gender stereotypes by wearing their dad’s rugby shirts and not washing their hair. They’re the baby. They stay close to mom and dad and don’t run off too often and wear cowboy hats when we think it’s cute and won’t ever grow up to split their new white jeans after falling off a lawn mower display case on a dare. They might bark at other dogs when they’re scared or lick themselves for an uncomfortably long time, but they’re our babies and we love them. People came together at Woofstock to celebrate that love. Now somebody get me a puppy.