Dana Jean Phoenix was still in theatre school when she watched the movie Drive. It was her first introduction to Synthwave music. Curious to hear more, she uncovered a handful of up-and-coming Synthwave producers on Soundcloud and reached out to them to write and record vocals to their instrumental tracks. This snowballed into working with some of the genre’s top players, such as Powernerd, Timecop1983, and Pertubator.

Phoenix is now considered one of the preeminent creators of Synthwave music and has toured extensively through Europe and the US. “The instant nostalgia evoked by the sound of analog synths and arpeggiated bass lines are what draw me to Synthwave,” she says. “Now I get to tour the world and rock my keytar onstage, so childhood me is in Synthwave heaven!”

As a kid, Phoenix was inspired by Madonna, Janet Jackson, and Prince. After studying jazz music at Humber College and theatre at Sheridan College, Phoenix gained a solid understanding of song structure and how to put on a dynamic stage show. Then, it was touring with Juno-winning and -nominated acts like Jully Black and God Made ME Funky that gave her the confidence to step into her solo career. 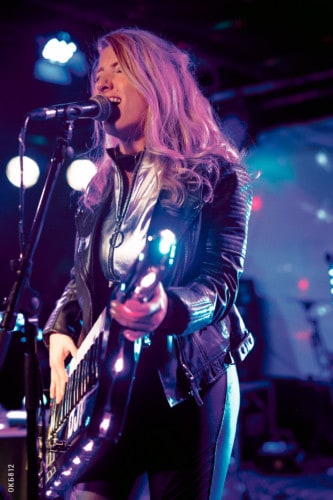 Now, she collaborates with other producers in addition to producing her own tracks. “I start with the bass and drums because I like to picture my performance and movement onstage,” she notes. “I like to maintain a theme of self-empowerment in my music and the limitless positivity that Synthwave can elicit. I’ve found that it’s helped me as an artist who writes and releases my own music and books my own tours independently.”

She’s seen the Toronto Synthwave scene grow significantly in recent years. And while the scene continues to be dominated by men, there are a number of Toronto female synth musicians that are making serious moves—artists like Mecha Maiko, Parallels, For Esmé, Austra, DIANA, Electric Youth and Maylee Todd. “I think our strength comes in our collaborations and supporting each other whether it is on music, shows, or just nerding out and trading information on music plug-ins and gear,” says Phoenix.

Phoenix is constantly working to hone her craft and refine her stage performances. “I’m so inspired by great live performances,” she says. “I’m really into programming my stage lights to augment the vibe of any venue I’m playing in.” Her next big show coming up is Outland Toronto 2019: Retrowave Festival, which will bring together incredible synthwave acts from all over North America and Europe. “I’m looking to forward sharing the stage with all the Synthwave Stalwarts: Mecha Maiko, Parallels, Michael Oakley, Timecop1983, FM Attack, and Kalax,” she says. “I also look forward to shredding some synthy solos on my keytar, Jareth.”

Grab your tickets to Outland Toronto, coming up on July 6 at Mod Club Theatre, here.