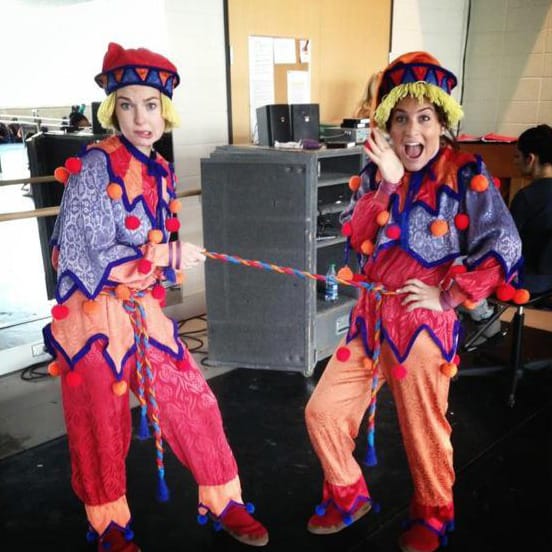 "I jumped up and down more than I ever did in Zumba class, and was as animated as I could possibly be."

Dance Life: Performing with the National Ballet of Canada in The Nutcracker

I spent 13 years of my life pulling up my pink tights, readjusting hairpins in my bun, perfecting my arch, and trying my best not to “sickle” my feet. I was no prima ballerina, but I took pleasure in dance, and ballet in particular. But when it came time to join the ranks of the more accomplished girls and go onto pointe, I opted to leave the world of blistering toes and pas de bourrees behind in order to pursue other extracurricular activities.

Fast-forward to October 2012, when I was approached by the National Ballet of Canada to appear in their closing performance of The Nutcracker as a cannon doll—a role previously filled by Margaret Atwood, Tie Domi, Tim Flaherty, and Rob Ford (let that last one sink in). Each year during The Nutcracker season, members of the media and community are asked to participate in this program—so how could I possibly say no to such a once-in-a-lifetime (unless I miraculously woke up in Heather Ogden’s body) opportunity?!

This past weekend was my NBoC debut. I was invited to bring a friend, so without hesitation I brought Alexa. The communications team at the NBoC gifted each of us with an extra ticket to the show (perfectly situated seats, might I add) so we invited our dear mums to join. When we arrived at the stage door, we were brought into the practice room. The floor was littered with pointe shoes, and we watched on as two of the dancers quietly stretched in preparation for the show (one of them was the Nutcracker!). At the start of the show, Alexa and yours truly were introduced as the cannon dolls over the loud speaker in the theatre, giving both of us a rush of energy and excitement.

Shortly thereafter the reining prince of Canadian dance himself, Rex Harrington, came into the room to greet us. Harrington was there to show us what we would be doing on stage during our time in the spotlight. For the next 10 minutes, he ran through our scene with us ever-so-briefly: Alexa would play the shy and scared doll who does not want the head cannon master to shoot the confetti cannon into the audience, and I would play the overly animated and excited one (that sounds about right) begging for the confetti to be shot. His advice for us? “Be big. Be over-the-top. Just have fun!” Coming from the So You Think You Can Dance Canada judge, I took these simple words to heart and gave it my all (nobody puts KLS in the corner).  At one point in our scene, Alexa was supposed to “faint,” and I, the hero, was supposed to catch her. I could sense her fear of potentially falling on her face (we learned that Tie Domi had been wacked in the face by one of the mechanical Christmas tree branches during his performance) but I assured her she could trust me to catch her…or at least try to.

Our costumes were a cross between clown-gone-rogue and Missoni’s Spring/Summer 2011 collection: bright and loud colour blocking at its best. Bonus points to the NBoC for providing us with L.L. Bean red slipper shoes that made jumping up and down at center stage like a crazed Bieber fan much easier.

Waiting backstage, Alexa and I watched in awe as the principal dancers and other members of the cast glided on and off the stage. The ballerinas, dressed in their immaculate tutus, continuously hit one another lightly on the skirt of their costumes prior to heading on stage. We figured this must be an act of good luck, because saying, “break a leg,” to each other probably isn’t the most fitting. Behind the curtains we met with a dancer who was performing as one of the snowflakes, but the highlight was meeting the young dancers—all at the adorable age of six—who played what were possibly the cutest mice I have ever seen.

When it came time for our moment, I followed the dancer who played the lead cannon doll onto the stage with Alexa behind me. For those six minutes under the beaming lights, we just let loose. I jumped up and down more than I ever did in Zumba class, and was as animated as I could possibly be. I improvised some moves of my own and smiled wide to the audience, although I couldn’t see any faces. At the end of our scene, we danced off stage and then just let out a big, “Ahhhhh.” What a rush! I was told by someone that day that everyone “should do something daring once a month,” and in that one performance I think we made up for the next several.

The experience was one I will never forget, and one that I am grateful for. It was over as quickly as it began, and as we sat in the audience during the second act of the ballet, Alexa and I looked at each other and agreed that our friendship was somewhat like our performance: a mix of humour, trust, and mutual adoration for each other. And although I do not think a contract with the National Ballet of Canada is in my future, perhaps a career in theatre or mime may be just the ticket! But realistically, I will likely just continue singing in the shower and hoping that one day I end up on The Voice *flips hair back and forth.*