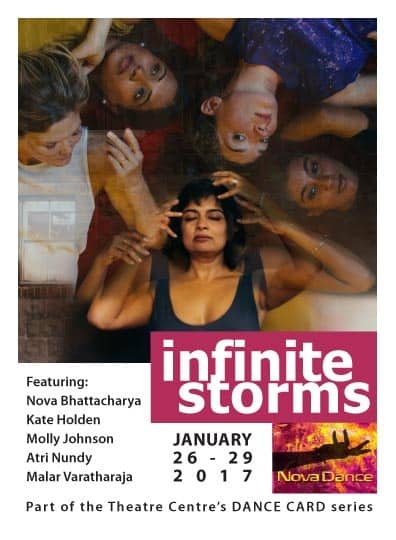 Nova Bhattacharya has found a way to use her migraine pain as the basis for choreographic exploration. Her new work, Infinite Storms, melds improvisational dance with classical Indian dance. It‘s a revealing investigation into how we work through the emotional and physical pain we encounter throughout our lives.

It’s not a piece about migraines per se, but Bhattacharya used those ideas during the creative process. “I wanted to use migraines as a jumping off point for movement research. I brought in the McGill Pain Questionnaire, which has a whole bunch of adjectives for describing pain – piercing, stabbing, pounding, shivering. The dancers each took two of these words and started improvising based on those ideas.”

Migraines are a common occurrence for Bhattacharya. Up until last year, she tried to keep them separate from the creative process. “It was a huge prospect to take that wall down. Now, when I have a migraine, there is a certain element of oh, I have a migraine…this is research for my piece! The fact that I was using that to make a thing of beauty is actually quite liberating.”

Bhattacharya has never cancelled a performance because of a migraine and believes that being a performing artist has given her tools to help navigate her condition. “I was recently talking to a neurologist friend about performing with migraines, and I was telling her about one instance where I was in a theatre with LED lights and the piece begins with my partner holding me. The light kept getting in my eyes, and it triggered a migraine within the first three minutes of the piece. It was one of the most unusual experiences of my life. My friend was so matter-of-fact and said, ‘It must have been a great show, because you must have thought you were dying.'”

She points to the time her husband was watching a documentary about a soldier who had been critically wounded. “On the battlefield, he kept doing the math of how long it would take for the medical team to get there. He kept doing the math in his head, over and over again, and that was how he staved off the pain until they got there. I thought, that’s what I do when I’m performing.”

The thing that she loves about contemporary dance is the fact that it can be read by so many different people in so many different ways, and can still resonate for each person. “I’m hoping that people will come and pour themselves into what we’re offering,” she says. “Hopefully we can reflect something back to them that helps them on their own journey.”