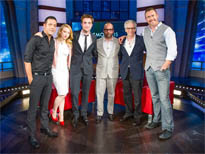 Outside the CBC studio of George Stroumboulopoulos Tonight (which features 186 shows a year), an excited crowd of regular civilians, members of the media and PR personnel were eagerly waiting to sit in on interviews of the cast of David Cronenberg’s new film Cosmopolis (Robert Pattinson, Paul Giamatti, Sarah Gadon).

Based on the novel by Don DeLillo, the film follows Eric Packer – a young Manhattan billionaire financier who, in a span of 24 traumatic hours in a stretch limo, loses all his wealth as the city crumbles around him in surreal anarchy and chaos.

Fun fact: Interestingly enough, Cosmopolis was filmed during the Occupy Movement in New York and it was hard to differentiate whether they were shooting a movie or a documentary.

First up in the series of interview was David Cronenberg (who has also directed A Dangerous Method, Eastern Promises, A History of Violence, and Crash to name a few), who was charming, unbelievably humble and full of deadpan humor.  Cronenberg describes Cosmopolis as cold and living in abstraction, where unlike in the days of Henry Ford when cash was tangible, “[Eric] makes a ton of money but never actually touches anything.” While Cronenberg wrote the script in a mere 6 days, assembling the cast proved to be no easy feat due to a number of pregnancies. Marion Cotillard (set to play Eric’s estranged wife Elise) left the project due to pregnancy and Cronenberg says Colin Farrel (set to play Eric), “got pregnant with Total Recall”, and had to drop out as a result.

Following the Cronenberg interview, you could sense the hullabaloo in the air (from all the ladies and at least 10% of the men) as Robert Pattinson walked onto set. Unlike his boyish good looks and movie star persona might suggest, Pattinson is as modest as they come, nervously tripping over his words before recovering quickly with his quiet Englishman charm. Although working with a director of Cronenberg’s calibre was undoubtedly a great career move, Pattinson feels a tad oversaturated in the industry and hopes to do smaller parts in the future – in contrast to his character in Cosmopolis where “Eric is obnoxiously present and incessantly speaking.” When asked what it was like to be “on the inside,” Pattinson responded humbly: “You could have an obscene power over people and it comes with a lot of responsibility – you really want to do something worthwhile with all that power.”

Next up was Paul Giamatti, who was wildly intelligent with a crude and arresting sense of humor. Never missing a beat, Giamatti expressed that being in Cosmopolis for the last 20 minutes of the film filled him with anxiety: “I got more anxious doing this than anything because it’s the end of the movie and I’m playing a psychopathic killer who doesn’t stop talking.” Giamatti, who has always played eccentric characters, likens his character to the umpire of a baseball game, appreciating the fact that they are often ignored and marginalized, yet supremely bad ass “like Darth Vader before he was Darth Vader.” When asked what he thought of Canada, he responded sincerely: “everyone is a helluva lot calmer.”

Speaking of Canadian and helluva lot calmer, last up was Sarah Gadon. Stunningly beautiful, leggy and blond, Gadon is an eloquent speaker, as well as a doppelganger for Reese Witherspoon’s demure character in Cruel Intentions. A shoo-in for the role as Eric’s estranged wife after Marion Cotillard announced her pregnancy (she also worked with Cronenberg on A Dangerous Method), Gadon seems to be a favorite of the Cronenbergs, also working with David’s son Brandon on Anti-viral.

Watch the cast and director on Stroumboulopoulos Tonight on June 7th at 11:05 pm