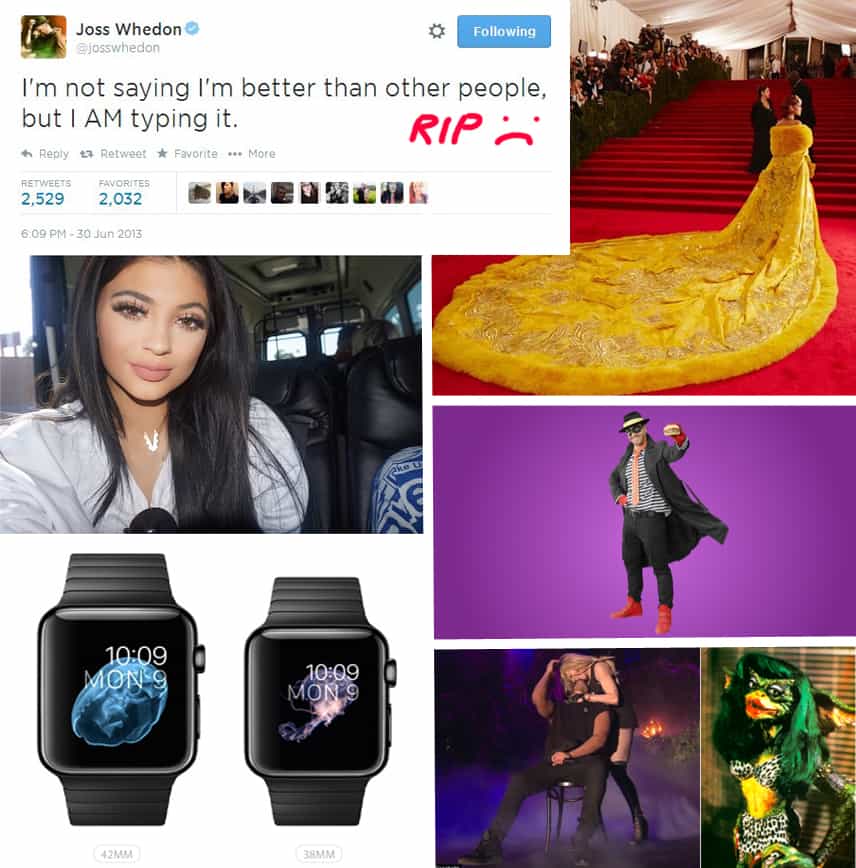 From Insta-meltdowns to gender politics, this is a weekly guide to what’s trending on the interwebs—with a little pop culture analysis and a lot of bitchin’. Buckle up!

Here’s what happened this week:

Avengers Director Joss Whedon recently quit Twitter after getting too wrapped up with negative comments. Earlier, Whedon spoke out about stock archetype characters in the new film, Jurassic World. He later reneged his comments thinking it was uncouth, and ungentlemanly of him. He followed by quitting Twitter.

Social media has become a sea of uninformed complaints calling for social justice. Stop complaining about art, celebrity and self-expression. Try spending your time speaking out about government policy, disputing the wage gap, and fighting for equal rights for women. When it comes to Beyonce’s kid’s outfit or a sentence in Lena Dunham’s book you might’ve found inappropriate – save your breath. No one cares.

Rihanna arrived at the annual Met Gala in a gorgeous yellow cape trimmed in fur, looking stunning as usual. I can take her in almost any  beautiful creation. What I can’t take is people comparing her ensemble to an omelet or frittata, or any other egg-based dish. No one cares about your hatred of yellow things. You probably just need attention.

I’ll let you in on a secret. Here’s the only thing you need to know about it: you can’t afford it. And also, there’s also a clock on your phone already.

They are fake, we knew it. Let’s all get on with our lives.

Swallowing young Canadian souls will do you good when you’re a soul-sucking vampiress. Only one per year, and don’t feed after midnight.

By swapping out a pudgy Alfred E. Neuman for a real-life model, McDonald’s hopes to lure more milennials to the brand via manufactured nostalgia. All I can do is pray for the young model dressed like a metrosexual male version of Carmen Sandiego.

Adam Levigne Gets Even Sweeter

The Maroon 5 front man was attacked by powdered sugar this week. Everyone is up in arms about the situation, and no one cares about Baltimore or police brutality anymore. All is back to normal.

The new Sex Education curriculum in Ontario has parents angered and distraught that their children will grow up to be smarter than them. Children are the future and they want our jobs. We must keep them at bay by informing them about nothing.

Lets teach them zilch about contraceptives so they all become pregnant at a young age AND contract STIs. Don’t inform them about other genders or sexual orientations because we want them to be as close-minded as possible. Teach them nothing about consent so they are confused when confronted with potentially dangerous situations. Whatever you do, do not allow the underlings to take control.

This has been a message from idiots everywhere.