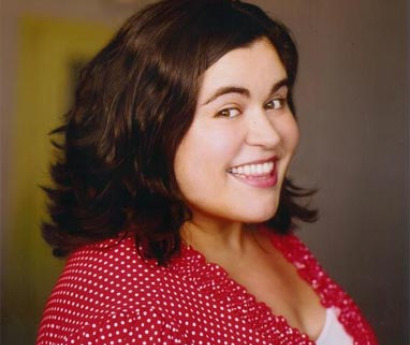 We played coy, but stand up comedian Debra GioVanni is one of our idols and when asked if she would want to take a road trip to Kentucky with John Candy, we secretly meant with us.

It’s easy to admire her humble disposition, become fascinated with her rumbly Muppet voice and awe struck with her capabilities to erupt any audience into raucous laughter but we were over the moon when over a very dark chat at Absolut Comedy Bar it became obvious that not only do we love her – but we gotta lot in common too:

1. Her nightmares consist of vomiting on stage. If that ever happened she may have to move to the Ukraine and just shut up. Luckily for her legions of fans, that’s never happened. (Our biggest fear is accidentally revealing our pubic hair to a group of young men as we stir them chili. Unfortunately, that happened.)

2. Her career in comedy began after Ryerson professors kindly suggested that her talents may be better suited for the stage versus illustrating fashion: “Ryerson was a big eye opener. I had couple of courses where you had to be a presenter. At the end of the first year I had two professors come up to me and say “Debra, nice meeting you – good work this year but umm ahh, you are in the wrong thing – you should be entertaining people.” (When our final Drama ISP consisted of an interpretive dance to CATS – we were requested to leave the theatre. Forever.)

3. Her first audiences were grade seven kids from Oakville – she took them on tours around the City TV building, kinda like Kenneth from 30 Rock. (Our first job was also at City TV. When we got reamed out for not delivering a tape to the news desk, we locked ourselves in a payphone across the street and cried.)

4. Assholes in Hamilton once had the audacity to throw spitballs at her. (Assholes at Queen and Spadina slapped me with a two by four. It’s dangerous in the big city.)

5. If she ever met Carol Burnett in person, she would be absolutely dumbstruck and may cry tears of joy. (We’d whine really loud “WE LOVE YOU MISS HANNIGAN!!” and then somersault down a staircase.)

6. Watching people lick orange cheeto fuzz off their fingers in the subway makes us both want to hurl. Debra DiG likens it to eating in a toilet. And if we ever catch you in a Porto toilet eating cheezies – that’s a deal breaker, ladies.

8. She watches far too many TV shows about rape, and isn’t sure why. Yeah – we had that conversation with our shrink.

9. Her favourite open mic in Toronto is SPIRITS bar and Grill on a Wednesday night. We simply love spirits in general.

10. Her pet peeves? Debra crackles, “I gotta lot of hate! I can’t abide by people who act like they just landed on earth like twenty minutes ago, people who can’t handle an ATM – like what year is this? Let me check my watch – I’m pretty sure it’s 2009!!!” Similarly, we have no tolerance for technology defunct space cadets.

Doing stand up is scary but Debra does it so well. Forget Miss Hannigan – WE LOVE YOU DEBRA DI GIOVANNNNNNNNNI!!!