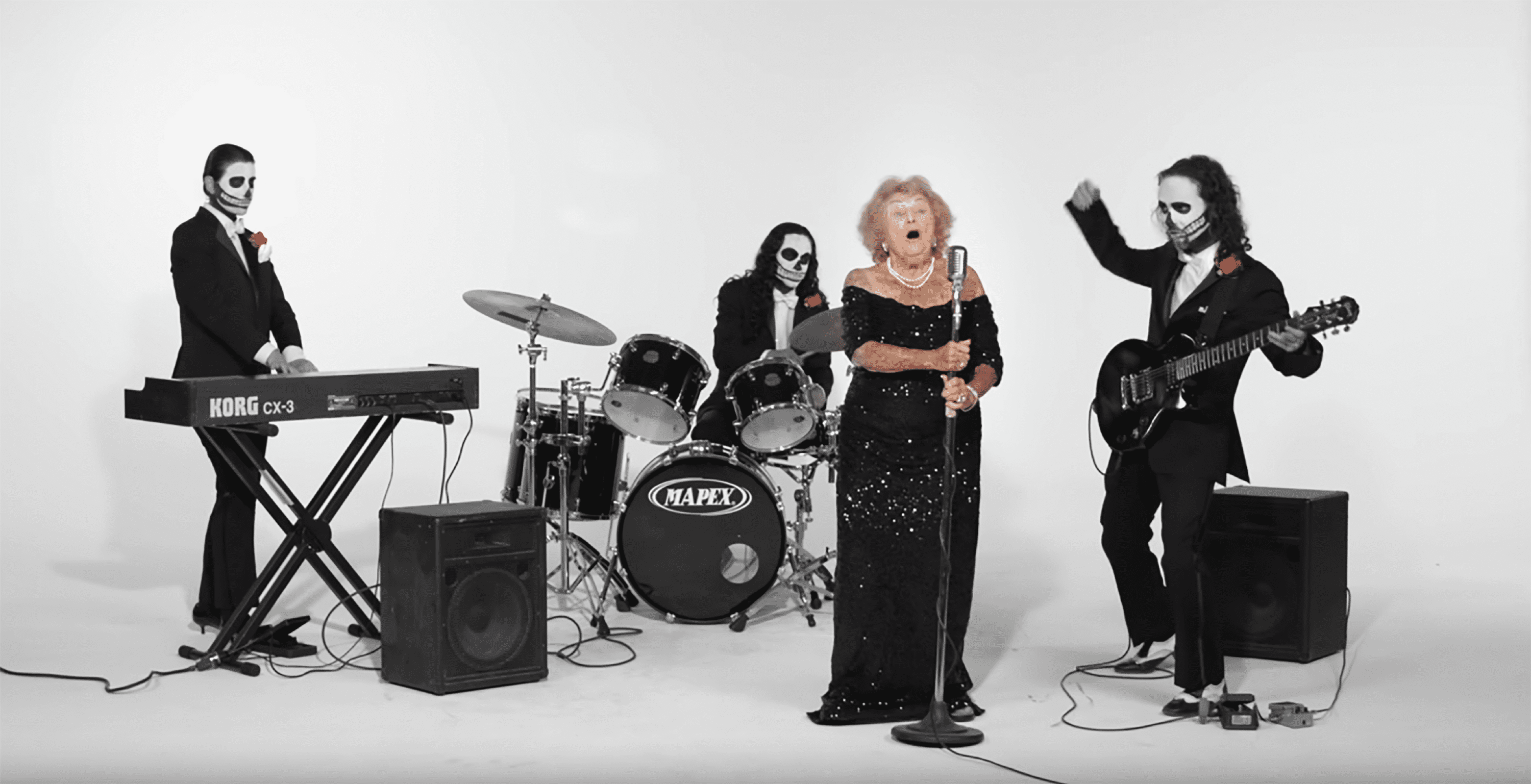 Death Metal Grandma tells the story of Inge Ginsberg, a truly remarkable woman with an astonishing past. She fled the Holocaust and became a spy, collecting intel from German troops in Northern Italy while masquerading as a housekeeper. After coming to the US, she worked penning songs for heavyweights like Doris Day and Dean Martin. She was married thrice, wrote books and became a journalist. Then in her ninety-sixth year, she pivoted again, this time to become a singer in a death metal band, eventually appearing on America’s Got Talent.

We asked Death Metal Grandma director Leah Galant more about Ginsberg, and what she’s learned from her.

SDTC: What did you think the first time you saw Inge perform with her band?

LG: I was actually filming with two Holocaust survivors, wrapping my last movie, Kitty and Ellen, when I pulled up the music videos for the first time on my phone. We all loved it!

Inge commands the room in a very special way. She brings the best out of you and inspires you to be your best self. There is something about her presence that draws people to her. Inge is full of incredible—and sometimes hilarious—pieces of wisdom and advice.

She did so many remarkable things in her life. What did she do in particular that surprised you?

I think what stood out to me about Inge’s story is that she left Hollywood after becoming a prolific writer for the likes of Doris Day, Nat King Cole and Dean Martin. But women during that time were under-appreciated for their music efforts and contribution. After surviving the Holocaust, being a spy and living as long as she did, she still had to confront sexism at all walks of her life. That brings us to the modern-day challenges she faces.

How did doing this documentary shift your own perspective? What did you learn from Inge?

I absolutely learned so much from Inge. Although I had initially reached out to Inge because I was interested in her death metal career, the reality is that elders should not have to be doing anything extraordinary in order to be seen or heard. We should have respect for elders ingrained into our society. Unfortunately that is not the case, which is why I decided to direct this film in an unexpected way.

I hope audiences are inspired to create more inter-generational bonds with and outside of their family, and see the benefits of that both ways.

What is your fave song of hers and why?

I love all of them, but I think my favourite one is her first: “Totenköpfchen” (Laugh at Death). The lyrics are incredibly powerful coming from a woman who survived the Holocaust. In the song, she basically reveals that her secret to old age is to laugh at death and the devil won’t come to find you. This is the sentiment she had to learn her entire life, starting with growing up in Nazi Europe.

Death Metal Grandma is coming to the Toronto Jewish Film Festival on May 8. Grab your ticket here.