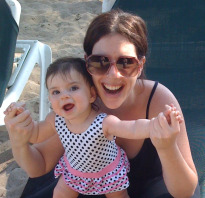 “Walking down the street with Sir Anthony Hopkins as people yelled ‘HANNIBAL’ everywhere we went was rather odd.”
How do you prepare for TIFF? Screening films, scheduling press days, responding to a plethora of emails and phone calls.
Where would we most likely find you during TIFF at 2PM? Running a press day or doing an airport run.
What has been your most memorable TIFF party? John Sayles Casa de los Babys at Drake Hotel
What are the three things you need during TIFF to survive? Comfortable shoes (Chucks or Frye boots when I can get away with it), my blackberry (cliché but true) and my amazing team!
If you are looking for a moment of peace and quiet within the ten days – where do you go or what do you do? I have a secret spot at the hotel I’m based out of. Can’t tell you where it is or other people would go there.
Which celebrity run-in has been your favourite? Or had you the most awestruck? Working with John Waters was a ton of fun. Bob Goldwaithe was the funniest. ‘Shushing’ Parker Posey, in the hallway where interviews were taking place, before I knew it was her was the most embarrassing.
What has been the strangest interaction you’ve had during TIFF? Walking down the street with Sir Anthony Hopkins as people yelled ‘HANNIBAL’ everywhere we went was rather odd.
Which film are you most looking forward to this year? The Young Victoria (disclaimer – one of the films I’m working on, but it’s closing night and going to be amazing!)
What’s your best advice for someone who’s never attended TIFF before? Go see as many films as you can. The Q&A’s are always my favourite part. Hang out in hotel lobbies if you want to catch a star-sighting. Be polite. You never know who you’re talking to.
Best SWAG ever? I have a swag lounge, so every year I feel pretty fortunate with the gifts I receive.
You have a huge smile on your face at TIFF – what just happened? I finished another year and everybody is happy.
If you could pick the brain of one filmmaker – who would it be? Steven Spielberg
If you could grab a drink with one celeb – who would you choose? Johnny Depp
What’s the first thing you’ll want to do once the insanity is over? Cuddle with my new baby girl and my husband. Order sushi. Eat on the couch and catch up on True Blood and Gossip Girl. Sleep. In that order.