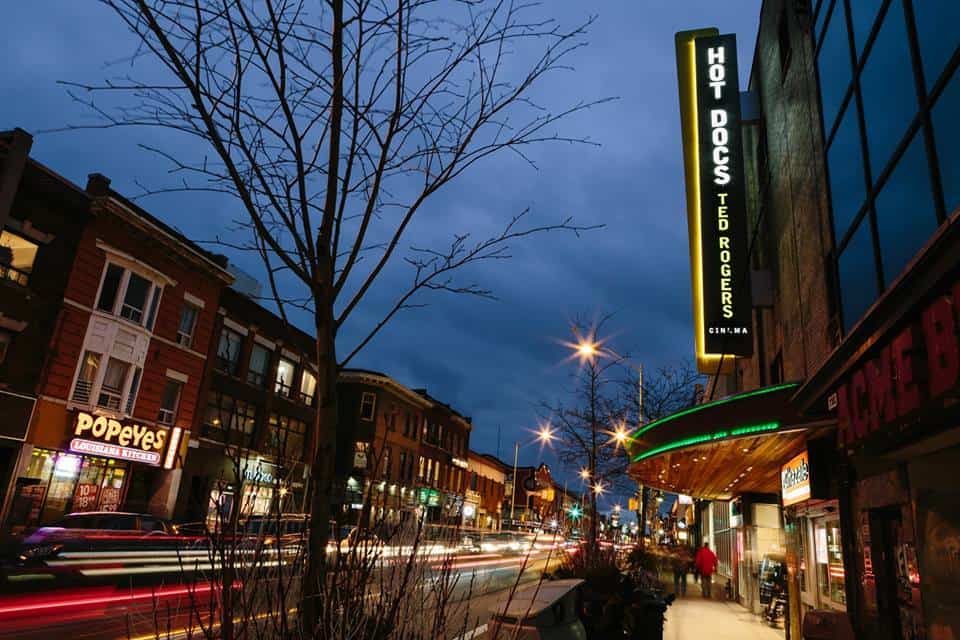 My love for documentary films started nearly 8 years ago at the Hot Docs International Film Festival, shortly after moving to Toronto. They served as a comfort from the loneliness of a new city.

Good documentaries can offer a feeling akin to connection. When separated from the world we know and people we care about, they are a window into the world and lives of real people, who despite the differences we can see ourselves in.

The COVID pandemic has stirred up a small tornado of unsettling emotions that have left me with feelings that resemble those early days in the city. And once again I find myself leaning on the brilliance of non-fiction storytellers to carry me through a time of isolation.

Before moving to Toronto I’d always felt completely at ease alone. When calculating the risks of relocating to a new city, loneliness was not even considered.

Always the first to leave a party, I’d feel a wave of relief once I’d escaped the chatter of a crowd and returned to the quiet refuge of my own thoughts.

To be alone was recharging, grounding, and nourishing. Part of what I think made it feel safe then, was that it was chosen. When alone in Calgary I was never more than a quick phone call and a 20-minute drive from the supportive arms of someone who knew and cared about me.

In Toronto that invisible safety net I’d taken for granted was gone.

During those first few years in Toronto, documentaries and Hot Docs provided solace. The festival was a sign, warmer weather was on the horizon and a brief reprieve from the ache of aloneness.

The festival usually occurred just after I finished exams and right before I started working full-time at my summer job on the island. When my time became open and unstructured the festival gave shape to the days, something to plan for, something to look forward to. More than anything, attending Hot Docs made me feel like I was part of something, if only as a passive observer.

I’d start early, to take in as many films as I could, optimizing the benefits that my student card provided. Biking between cinemas, I’d arrive at a screening lineup a little sweaty. Despite my disheveled and frazzled appearance I was more often than not greeted with a warm smile and knowing nod from a stranger. And the lineups were just as essential to the festival experience as the films themselves. They are the best place for reviews and recommendations. Everyone is eager and excited. There is a palpable sense of community. I cherished those conversations, they were sometimes the only ones I’d have all day.

I can never recall all the films I’ve watched. There’ve been a few that for one reason or another have stuck with me. Oilsands Karaoke in 2013 is one that remains in my brain. I was so earnestly excited to see anything set in my home province that the actual story was secondary. Putuparri and The Rainmakers in 2016, is also a film that, even now, I think about a lot. Set in Australia it follows the story of a man trying to connect with his ancestral past and has some of the most breathtaking cinematography I’ve ever seen in a documentary. I can still picture the red soil contrasted with the dark grey rolling rain clouds. Everything about it is beautiful and I would recommend it to anyone.  But most of the films I’ve seen have gotten lost somewhere in the corners of my brain over the years and that is ok. It doesn’t bother me too much that I can’t rattle off all the films I’ve seen over the course of a festival or a year. That’s not why I watch them. I watch for the feeling they give me, for the privilege of access and insight to another life.

In recent years, thankfully, my attendance has been motivated more by an appreciation for good storytelling than a desire to escape feelings. Still Hot Docs remains one of my favourite events of the year. Watching a film at the Bloor Street theatre feels like visiting an old friend.

This year’s festival, of course, is different. Everything is different. Although I am grateful that a selection of films have been made available online, thanks to CBC Gem, I’ll miss smalltalk with strangers and the way a crowd settles when the theatre lights dim. Watching Made You Look: A Story About Fake Art from my laptop on ‘Opening Night’ was strange and bittersweet.

In the face of all that has changed over the past month my emotional state feels familiar to those early days in Toronto. I’m lonely.

I miss my friends. I miss a routine. I miss the barista across the street.

Uncertainties and anxieties creep into my thoughts, brought on by the state of the outside world, then worsened by too much time alone — self isolation with no clear end date.

Even the way I spend my time and communicate is similar to those early days in the city. Afternoons filled with long walks alone. The city presents with a newness that’s been lost to routine after nearly a decade. I find myself once again grateful for the miracle of technology and reminded of its shortcomings. Video chats will always be a poor substitute for a shared meal and a hug from a good friend.

I try to identify the differences between loneliness and solitude. Why seemingly the same thing evokes different emotional responses.  Loneliness is forced on you, I think. It is a feeling of being untethered. It is a future without foreseeable certainties or consistencies.

I try to stay positive, making mental notes of all that I have to be grateful for—my health, my safety, my home.

I count the days since I last felt human touch and speculate when I’ll feel the embrace of a person I love, same as I did nearly a decade ago.

I am once again leaning on films, specifically documentary films to carry me through these times of loneliness.

I’ve been trying to watch one documentary every day, taking full advantage of the excessive amount of streaming platforms available. So I’ve been paying close attention to the Hot Docs at Home schedule, making a mental note of which films I want to watch each week. Same as it did years before, Hot Docs is providing a bit of structure at a time when I feel untethered. A reliable constant for the next few weeks, when everything else is shifting—Thursday night is Hot Docs night.

The ability to get lost in the story of someone else’s reality rather than spiralling in my own has been a small life raft during quarantine.

I am excited and grateful for any films that have been made available during this time, but I am particularly looking forward to Finding Sally, (April 30) a personal investigation by director Tamara Dawit into the life of her aunt, an Ethiopian aristocrat-turned-communist-rebel.  Influence ,(May 21), a doc that examines a public relations and reputation management firm who played a significant role in advising the British government under Margaret Thatcher.

Documentaries remind me that there lives being lived beyond the confines of my apartment, that there was a world before the COVID pandemic and perhaps that there will be one after it.

Shyloe Fagan is a writer and storyteller based out of Toronto.