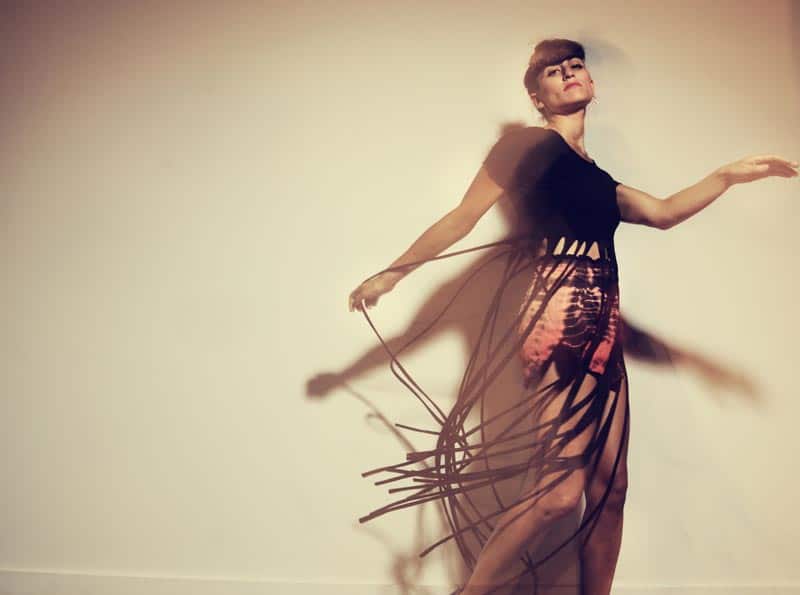 "I'm addicted to making things and writing songs. When you're not getting anywhere, it's a bit torturous and horrible. But it's mostly amazing!"

Exciting, dirty, and vigorous: Dragonette has been giving us powerful songs since the band released Galore back in 2007. Dragonette’s music is made up of glam-rock-electro-pop tunes that are meant to be cranked loud. In music videos and on stage, lead singer Martina Sorbara projects a strong and fiery energy that is at times quite sexual, but she was very reserved when we chatted with her last month. Pretty, petite, and with a delicate demeanour, she spoke to us quietly, cautiously hanging on every word.

It’s been a rather packed year for Dragonette. Bodyparts was released in September, and the band toured all across North America (not to mention a 30 hour stint in Buenos Aires). Martina also released the single Merry Xmas (Says Your Text Message) in November (pretty sure it’s the only Christmas song with “fuck you” in the lyrics), and bought a house with her husband/bandmate Dan Kurtz in Toronto’s High Park neighbourhood. PHEW! Thank goodness she has the holidays to rest! Right? “No, this holiday season is totally fucked,” she says. “We were expecting a bit of time and then everything just built up. We’ll have to do something in January, I guess.” Oh.

That said, she’s excited to play ET Canada‘s New Year’s Eve at Niagara Falls bash and share the stage with Nelly Furtado and Hedley. Last year, the annual event was attended by 60,000 people. The show will be live broadcasted across the country. No big deal. No pressure.

With all her success, it would be easy to assume that life for Martina is awesome. And it is! She’s very proud of her accomplishments, but it’s not all one big joy ride; it’s also very challenging. We sat down with her to get a better understanding of what life is like when you’re constantly on a tour bus or dealing with the pressure to create the next hit.

Shedoesthecity: What will your 2012 go down as? With so much to choose from, what are the highlights?

Martina Sorbara: We went on one of the most extensive and satisfying tours. It was very career affirming. We played Coachella, which was amazing; it was one of those things where you have no idea what to expect. It was like a big warm embrace. And I’m really proud of the album we put out. This is the year of Bodyparts.

SDTC: So you get a break now, right? Is 2013 the year you chill out and enjoy your new home?

Martina: That’s the problem with this industry. I don’t really feel like there’s ever a moment when I’m like, “Yeah, I can take a break.” When you’re not touring, you should be writing. That’s just the way it goes. Especially now, the way careers work with social media, there’s always a platform to release something. It doesn’t need to be an album—just a song that propels you forward, especially in between albums.

SDTC: Do you have any New Year’s resolutions?

Martina: I kind of make them after the fact. It takes me a long time to think about them. They generally have to do with being more forgiving and not being judgemental.

SDTC: How do you feel about performing to such a massive audience this New Year’s?

Martina: It’s exciting, but I get really nervous for TV things. Even if I’m not consciously nervous, all of a sudden I get on stage and my voice is nervous. I’m like, “C’mon, voice, really?” There’s something different about performing for a concert audience and performing for TV. If there’s the audience infront of me, I don’t care how big it is, I love doing it. But when there’s this ambiguous, unknown audience, it’s a tiny bit different. I’m getting better at it. I just have to change something in my mind and decide that I’m gong to be okay.

SDTC: You’re married to your bandmate, Dan Kurtz—how do you switch off and just enjoy married life? What’s your advice to couples who work together?

Martina: You develop whatever system works for you. With Dan and I, one of things we’ve learned is how to be able to critical of each other and helpful without offending each other. You have to learn to be able to say, “I don’t want to talk about work right now. It’s 11pm—can I just be in bed with my husband?” That’s just something you have to practice and see what your tolerance level is. The benefits of being in the same line of work probably outweigh the downsides. You just have to figure out the balance.

SDTC: What happens when you have to churn out new songs but you aren’t feeling it?

Martina: It’s tough. You just have to force yourself. That’s one thing that I think I’ve learned: that this is my career as opposed to my hobby. This is my job and I have to force myself to sit down in front of the computer and start throwing things on, recording things. It’s not easy. The thing is that there isn’t a right time and a wrong time. Sometimes when you’re really inspired and sit down, nothing happens. And sometimes when you force yourself to sit down and you’d rather be, like, baking a cake, something comes out. You have to be aware of that and know that the more you sit down and the more you try, the more will happen. Even if it takes a long time. It’s hard. I’m not that disciplined yet. I’m aware of what I need to do to get it done, but I’m not actually that disciplined.

SDTC: How do you energize your creativity?

Martina: I ride my bike. I find that very inspiring. I think it’s just putting myself in positions where my mind is wandering and my body is active. That’s always fruitful.

SDTC: What do you love most about being a musician?

Martina: I think everything that is great about this job is also the worst part of this job, depending on your mood. Travelling—I love travelling—is what drives me, but at the same time, it’s exhausting. It creates all these other problems. Home always feels weird. It takes its toll but at the same time, travel is the other thing [besides music] that I’ve been passionate about my whole life. And I love the creative side of this job. It’s so amazing to create. I think I’m addicted to making things and writing songs. When you’re not getting anywhere, it’s a bit torturous and horrible. But it’s mostly amazing!

Catch Dragonette live at Niagara Falls on New Year’s Eve, or tune into Global and celebrate at home with a glass of champagne while you bop around the coffee table to Hello.