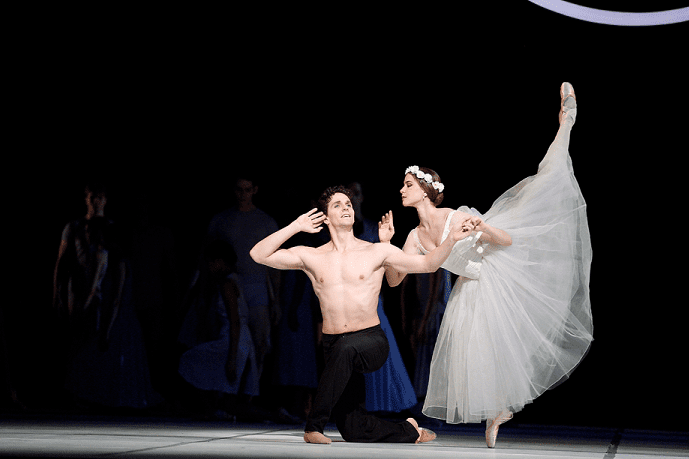 How to dress a dancer: Backstage with The National Ballet of Canada

The National Ballet of Canada’s current performance, Nijinsky, is a window into the life of one of ballet’s most revered dancers, Vaslav Nijinsky. More than mere biography, the show delves into Nijinsky’s inner world and eventual descent into madness.

She Does the City went behind the scenes with the Nijinsky’s wardrobe staff to see how the costumes for a show of this scope are created. Under the direction of John Neumeier (who created Nijinsky in 2000 for the Hamburg Ballet), Wardrobe Supervisor Marjory Fielding traveled to Germany to study the costumes of the original production. She had to consider both original sources (photographs from Nijinsky’s own life) and Neumeier’s interpretations for the modern stage. Nijinsky came into his own in the early 20th Century, when costumes were considerably bulkier. Neumeier wanted to remain true to the spirit of Nijinsky’s actual costumes while letting the fluid lines of the dancers’ bodies come through. 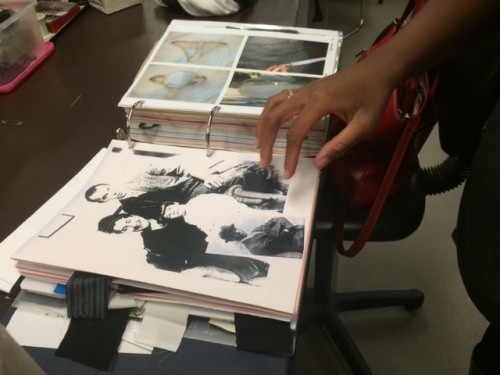 After carefully studying these costumes, Fielding began assembling an enormous reference binder containing swatches, measurements and over 600 photographs so that each costume could be painstakingly re-created for the Canadian performance. With the help of wardrobe coordinators Barbara de Kat and Grant Heaps, Fielding attended to the minute details that most of us would be hard-pressed to see. 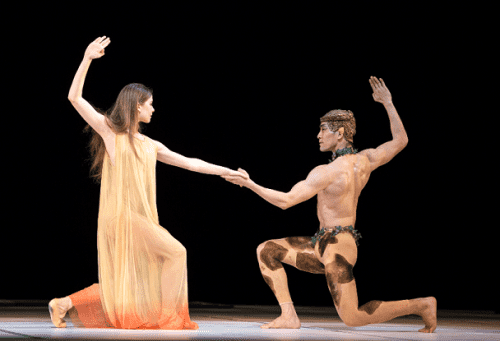 For the faun outfit, the spandex pants were dyed to match each dancer’s skin tone (several dancers are trained to dance the role). Each spot was hand-painted with acid dye on to ensure exact replication of the German costume. Faux grapes and leaves were affixed to the waistband. 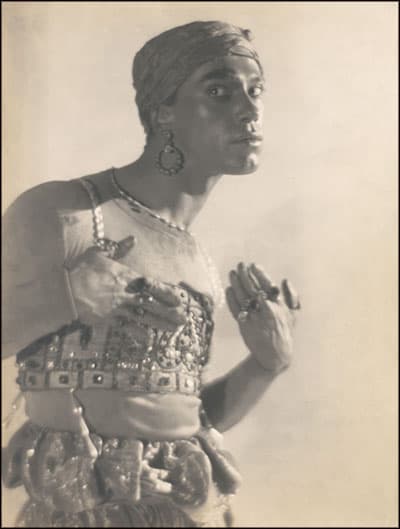 Vaslav Nijinsky himself as ‘The Golden Slave’ in Scheherazade.

For the Golden Slave costume (above), the bulky t-shirt of the original costume had to be nixed.  “The Nijinsky costumes are very realistic because there were a lot of photographic references,” said Fielding. “But they have been changed so that you see more of the body.” 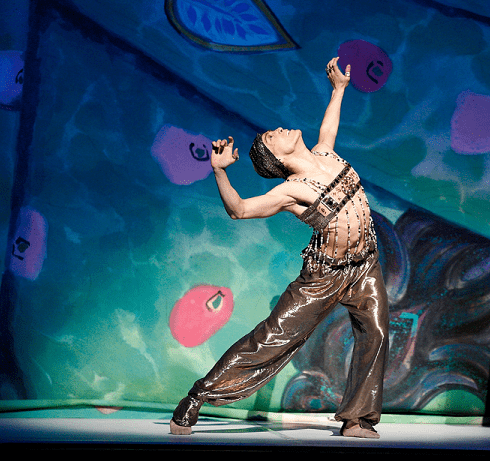 The updated version allows for breathability and exposes more flesh. The motifs (largely sourced from Little India) were arranged on a souffle, which makes them appear to ‘float’ on the dancers’ skin. The top piece is connected to the tissue lamé pants by strings of beads (patterned exactly after bead formations of the German production). 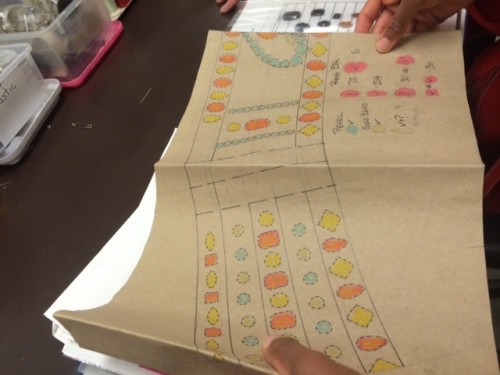 For the Harlequin costume, the length and width of each individual diamond in the fabric was measured and then hand-painted to appear authentic. 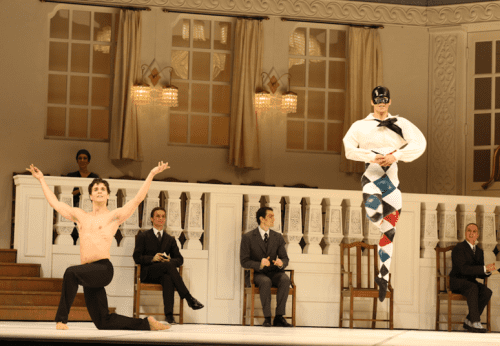 The costumes for the ballerinas were no less involved than their male counterparts. For one Romola (Nijinsky’s wife) dress, the original was made in a particular fabric that wasn’t available anymore. “So we ended up digitally printing fabric from xeroxed scraps of fabric, knitted together so you could try to understand where the repeat was,” said Fielding. “Then the cutters look at the original sketch and plan the most efficient way to make it.” 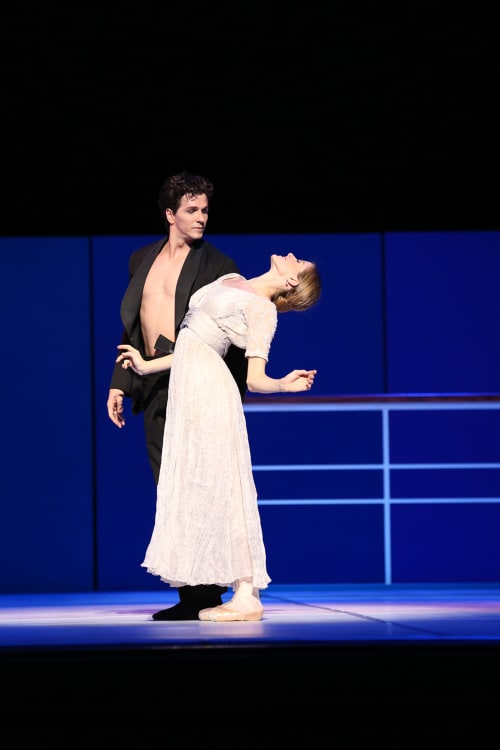 “I always like to start locally then branch out. It can take months to find the right fabric,” said Fielding. There was also the challenge of dealing with numerous last-minute casting changes (which requires different sizes). “But that’s what we do,” laughed Fielding. “I love his (Neumeier’s) choreography. He has a certain vocabulary that you begin to understand.” Fielding’s team must quickly learn this vocabulary and incorporate it into costumes that will stand up to the rigors of intense dancing and sweat. 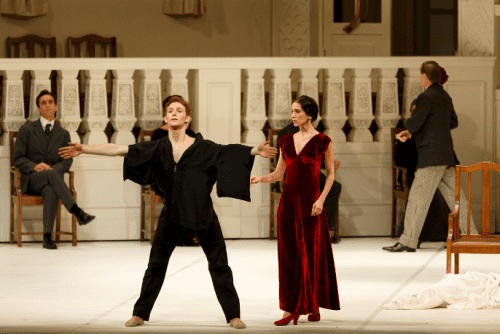 Skylar Campbell and Sonia Rodriguez in Nijinsky. Photo by Bruce Zinger. (Nijinsky in his komono and Romola in her red dress)

The dressing of the dancers backstage is its own choreography. The character of Nijinsky has 9 different costume changes in the first act alone. Sometimes, shoes and hair need to be changed as well. The outfits have to be racked in the exact order they appear onstage, and organized like an assembly line. There are even detailed instructions as to which arm goes in which sleeve first. In some cases, pieces from later scenes are worn underneath to expedite changes. 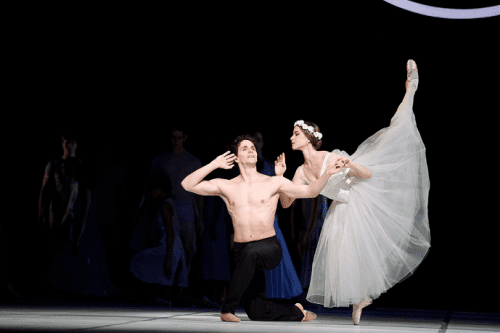 During performances, dressers stationed at different locations around the building to aid the dancers. “We station people throughout the building, we even know if they go off stage right or stage left, so we make sure their costume is in the right place,” said de Kat. Principal dancers that require multiple quick changes are assigned a team of dressers which operate with all the precision and speed of a Formula 1 car racing pit crew. 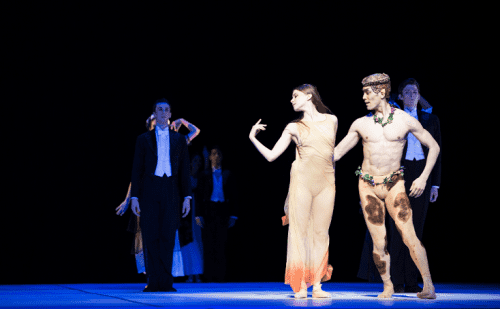 Keiichi Hirano and Elena Lobsanova with Artists of the Ballet in Nijinsky. Photo by Cylla von Tiedemann. (The Faun)

After each performance, costumes are repaired, laundered and steamed, then placed back in their assembly line order for the next show. When the show is completed, costumes are either stored or shipped off to tour with the company.

Nijinsky runs until November 30th. Don’t miss it. Get your tickets here.