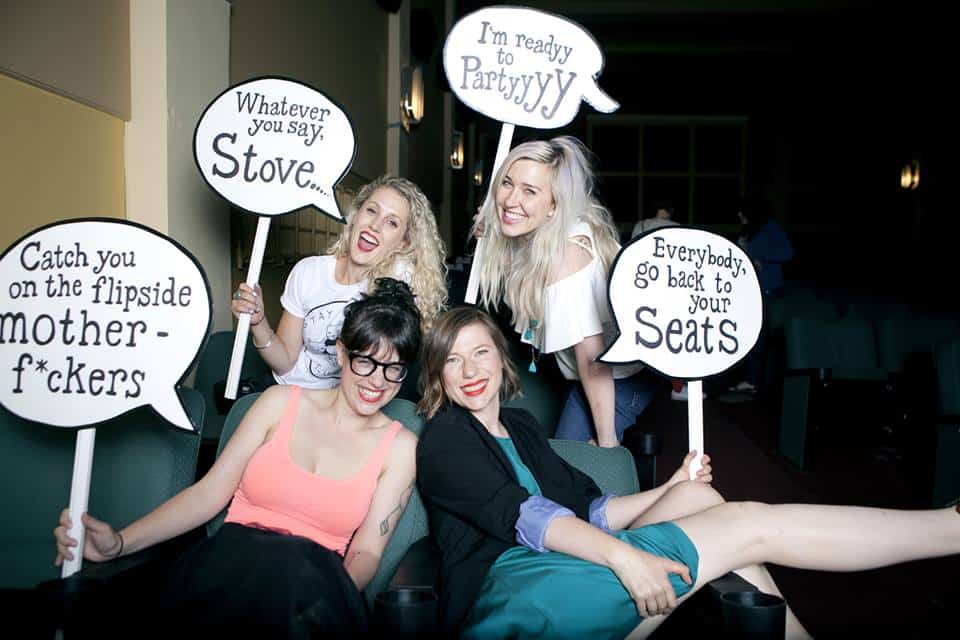 It’s not easy being a feminist in today’s society or in yesterday’s society or in any society. You’re constantly being told that you’re too sensitive or you need to relax or that sexism is long gone and equality has been achieved and Roosh V isn’t the antichrist.

It’s especially not easy being a feminist when you’re watching movies, since, you know, most cinema seems to be directed by Martin Patriarchy and is specifically designed to piss you off and ruin your week.

If only there were a cool, safe space where you could sit with like-minded feminist sisters in an air conditioned theatre and eat popcorn and play drinking games and freely share your opinions without judgment or mockery or being labeled the Debbie Downer.

Good news, ladies! THIS MAGICAL PLACE EXISTS! May I introduce to you: Drunk Feminist Films aka your new oasis. I sat down with three of its creators – Shaunna Bruton, Gillian Goerz and Steph Guthrie (Amy Wood, the fourth member, sadly couldn’t make it) – to discuss their upcoming screenings of Clueless and Fast Times at Ridgemont High, how this brilliant idea came to fruition, and why you should hire them to host your next gala.

Jess Beaulieu: So, firstly. How did the four of you get together to start Drunk Feminist Films and what inspired the project?

SG: Oh yeah! There it is. And we were both like, “Well, we obviously have to instagram this coincidental moment.” Amy then commented on the photo and it turns out that she’s been friends with Gillian for a while.

GG: And Shaunna and I knew each other through friends of friends and she was just finishing her women’s studies degree. At the time, I was really into Twilight. I had read all of the books and they were so bad and offensive but really funny and page turn-y. One day I thought, “What if I wrote a feminist drinking game for Twilight?” So I did that spontaneously and I needed people to beta test it on. I had just met Steph and she was feminist-y and I knew that Amy was too. I thought if I got three people who have a passing interest in feminism into the same room maybe this would work… somehow. At least it would be fun! Shaunna was the one who said, “This is like Drunk History (that web series where everybody gets loaded).” Then Steph got online and was like, “What if we did this?’”

SG: People seemed very excited about it and we were too. Who wouldn’t be excited about watching a movie with their witty pals and making incisive yet light-hearted social commentary?

Shaunna Bruton: The whole idea behind Drunk Feminist Films is that we’re people who are feminist in orientation and when we’re watching movies we cringe or want to curl up in a ball and die because of the way genders are presented. But it doesn’t always have to be like that. We can get together with other people like us who think it’s funny as fuck and drink and have a great time while still pointing out what we think is problematic.

SG: We also celebrate the positive parts in the film that are actually nuanced or interesting. So it’s both sides of that coin of pop culture. Appreciating the good stuff and talking about how it can be even better and ripping the bad stuff to shreds.

GG: I often hear, “Could you please shut up about every little thing in this movie that’s annoying?” We all know those people – the ones who aren’t remotely interested in hearing about how frustrating it can be to watch films through a feminist lens. They’re constantly requesting that you “turn it off for one night.” But when we’re with this group of people we don’t have to turn it off. We can ride it out.

JB: Drunk Feminist Films began as a web series, is that right?

SB: It is. We all thought it would be hilarious as a YouTube series so we made a bunch of episodes and that went well. Then we hosted a few events and people really loved those. We showed The Craft at the back of a sushi place and our first screening at the Revue Cinema was in April.

GG: The events were great because it meant that the living room was bigger and we could invite other people as well. More voices were being heard and audiences were saying stuff we hadn’t even thought of, which was amazing to hear.

SB: We were worried at first that only ten people would show up and it would be mortifying. But the Revue screening sold out in a day! And it wasn’t just our friends who attended. It was strangers of different ages and genders. A variety of people came, which proved to us that we really had something.

SG: Whenever we publish a new event there are people who comment on the Facebook wall and tag their friends. They’ll write, “Valerie! Christina! Girls night?” It makes us feel so good that they think it’s a special event and want to share it with their pals.

JB: So, what happens at the event? You screen a movie and there’s commentary during? And drinking games are being played and stuff is being shouted out? How does it work?

SG: We set up the screening with a little talk. Just a quick hype chat to get everyone excited. Hype chat… is that a thing?

SG: We usually have a themed cocktail for the evening and merch on sale sometimes too. Once we get the show on the road our guest host says a few words about the themes in the movie that they’ve been reflecting on and then we introduce the rules for the drinking game!

SB: Which we always come up with beforehand. It’s what we’ll be doing tonight. We’ll watch Clueless and Fast Times at Ridgemont High and shoot the shit and laugh and take whatever comes from that. We seem to always end up talking about fashion items. We have a lot of rules about turtlenecks and toques and blazers.

GG: And there’s live tweeting throughout the event as well.

Shaunna: Yeah and some people who tweet aren’t even at the movie. They’re watching at home because they couldn’t get a ticket.

SG: It’s really participatory and high-energy and there are lots of positive vibes in the room. Bridesmaids and Fifty Shades of Grey are the two films that we’ve screened at the Revue and although there are really different levels of appreciation for those movies, we were able to have good critical discussion during both. Also, a lot of LOL moments.

JB: How do you choose the films and why did you pick Clueless?

GG: I’ve been jonesing to do Clueless for a long time and I think it’s actually been on all of our radars for a while. A lot of the early films that we picked were high school movies with four women as the centre. We did Mean Girls and The Craft so Clueless was on the mind. And it’s the 20th anniversary! It seemed too perfect. Plus, I don’t know a woman who that isn’t a beloved movie for. Clueless is the best.

SG: I know a lot of dudes who enjoy it as well. It has pretty broad appeal and the characters are so smart and interesting and compassionate.

GG: And it’s a Jane Austen remake so it’s got some themes that go beyond pop culture and current society. It bridges the gap between the past and the present.

SG: Clueless was such a game-changing movie in terms of inventing its own fashion and language as well and these are areas in which teen girls tend to be pioneers. It’s nice to showcase a film that was foundational for so many young women.

JB: Speaking of inventing language, what are some of your favourite quotes from Clueless?

SG: I actually have a quote from the movie tattooed on my body, so I should probably say that one! The tattoo is, “Tis a far, far better thing doing stuff for other people.” 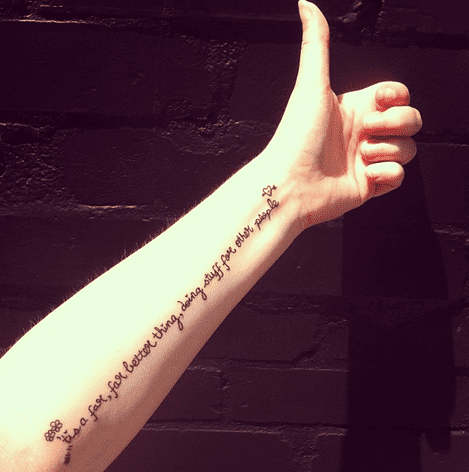 GF: Any time I see a person sitting on grass anywhere I think, “the loadies generally hang on the grassy knoll.”

SB: Mine is “rolling with the homies.”

GG: Yes! Also, “I’ll be seeing you… hopefully not sporadically.”

SG: And “He brought over Some Like it Hot and Sporadicus.”

JB: I saw that the drink for the event is “The Crimson Wave” as in, “I was surfing the crimson wave. I had to haul ass to the ladies.”

GG: THAT is my favourite line.

JB: Me too! And why Fast Times at Ridgemont High? Is it being paired with Clueless because of director Amy Heckerling?

GG: That was actually a coincidence. We agreed on those two movies and then I was IMDB-ing them for trivia and I realized that both were directed by Amy Heckerling. So, it was a super triumph! A female director. Two movies about high school women in different eras, a decade apart so we could compare them. Fast Times is a comedy but it’s a lot darker than Clueless.

SG: It’s also got some themes in it that you probably wouldn’t see as much in movies today. They talk about abortion. Other than Obvious Child, when was the last time you saw a movie where abortion was portrayed as a positive choice a person can make for themselves?

JB: What’s next for Drunk Feminist Films? I saw that you’re relaunching the web series?

SG: We are! We’ve connected with the wonderful comedian and editor Rhiannon Archer who is going to be directing and editing some new episodes of the series for us. We’re going to be making a big announcement at the August events about how the series is going to take shape and how people can participate in it. We’re pretty stoked.

JB: I saw on your site that you could host other events, or conferences, or gatherings too.

GG: Yes we’d gladly do that!

SB: I’ll host a gala! As mentioned already, I did a masters degree in women’s studies and I was thinking about how awesome this would be for students. Then, before we even had a chance to reach out, we were contacted by different universities.

GG: I think that engaging young people is a great idea. Obviously the drinking motif doesn’t work for teens who are underage but maybe down the road we could come up with something that doesn’t involve alcohol. We’ve always said that our events are not just for people who drink.

SB: Yes. It can definitely take many forms. So what we’re saying is… call us?

The August 20th screening of Clueless is sadly sold out, but tickets are still available for the Fast Times at Ridgemont High and Clueless double header on August 22nd at the Revue Cinema (200 Roncesvalles Ave).

To purchase your ticket to Drunk Feminist Films go to eventbite.ca.