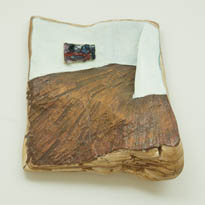 He has an untamed beard and likes to work with wood, but James Gardner is not a lumberjack, he is an artist who is currently making some noise with his sculptured paintings of quiet little rooms. Showing at Dundas West’s LE Gallery, Gardner’s empty rooms are layers of bulging hardwood combined with rich browns and milky whites that create a 3D feeling of sunken floorboards, with paint spilling at their sides. His pieces are nostalgic and lonely, featuring rooms with corners that go on forever and cracks that you can hide in.

Gardner plays with the role of the viewer in his work. He considers the effects of the physical environment in which a painting is displayed.

“Art reception does not occur in a vacuum,” “says Gardner and explains that he has accounted for the onlooker, the impact of the viewer’s clothes on the painting and the tint of the lighting in the space.

Unlike many hip shows in this west end neighbourhood, Garnder’s opening was unpretentious, perhaps due to his willingness to answer questions and his mismatched shirt and tie. The crowd was a mix of bespectacled thirty somethings and a handful of punks who had wandered in from the back (which featured an exhibit “documenting the sublime beauty of firearms”).

Hailing from Kitchener (where oddly, most of the cool kids in this town come from) Gardner moved to Guelph for school, where he got his chops in a basement studio of a thrift store. Amid the bags of cast-offs, musical instruments and mannequins, Gardner convinced the owner to clear out some space and allow him and his colleagues to show their work. It’s quite a leap, then, that he moved from showing in a Guelph basement to the walls of well heeled Le Gallery, which has exhibited and helped launch hot artists like Jason Kronenwald and Nicholas di Genova.

When he’s not rubbing shoulders with the urban sophisticados that frequent Dundas West, he’s working in his studio near Cherry Beach. This space is part of a collective studio called vsvsvs of which he is the co-curator. Catch Gardner’s show at LE Gallery until March 27. Following, head to Camp 4 and discuss how you’d decorate your most perfect little room over whiskey and soda.