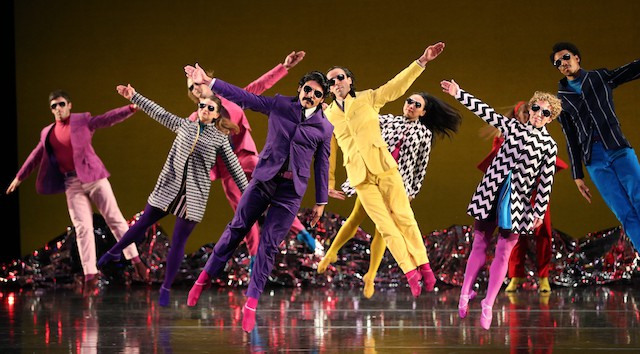 Pepperland is coming to The Sony Centre February 24th! This beautifully choreographed performance by the Mark Morris Dance Group pays tribute to the Beatles’ iconic album, Sgt. Pepper’s Lonely Hearts Club Band (which, by the way, is celebrating its 50th anniversary this year). A fusion of original scoring and choreography, Pepperland is a fantastic opportunity to relive this cherished album, no matter what era you’re from.

This totally vibrant dance show wouldn’t be what is it without the imaginative costume design of Elizabeth Kurtzman, who perfectly captured the bright colours and textures of the Sgt. Pepper’s era. This legendary costume designer, whose been in the biz for four decades, has worked with Mark Morris on Dancing Honeymoon, Sang-Froid, The Argument, Greek to Me, Four Saints in Three Acts, Empire Garden, Visitation, The Muir, Crosswalk, Petrichor, and Pure Dance Items.

We wanted to find out more about Kurtzman, a Manhattan native who has been working in the fashion industry ever since attending the Parsons School of Design in the late ’70s. Learn from her!

SDTC: Was there a moment/production/film in your childhood or adolescence that steered your passion for costume design?

EK: I was obsessed with The Wizard of Oz. No matter how many times I see that movie, there are fabric and details I haven’t seen before. The colours still dazzle me after the 200th viewing. I am still not sure what was inside the flying monkey costumes.

When you look back at your time at Parsons, what do you think was the greatest lesson the school taught you?

I was at Parsons at a very strange time. The head of the department had been there for many, many years and was not exactly keeping up with the times. Girls were not permitted to wear “slacks” and absolutely no denim on anyone. You were being trained to go into the fashion business and were not encouraged to be too creative. It was the late ‘70s and was run like it was the ‘50s.

Parsons got a much-needed makeover soon after I quit to work in the fashion business. The most important things I learned were in my foundation year colour theory class. We had to do so many exercises I thought were for nothing, but great lessons in the way colours react to each other and to light is so important when I’m working with fabric.

What aspect of your work do you love most? What part of the process really gets you excited?

That first meeting and watching that first rehearsal, when you get a taste of what you are getting into. The initial meetings and rehearsals give you an introduction into Mark’s concept and what he’s looking for. It’s an incredible privilege to see the dancers working out the choreography, which is always a mystery to me. It’s a language I don’t think I will ever understand. Then it becomes all about the research: fabric, colour, shapes, trying to visualize what it will all look like at the end. I spend a lot of hours doing research on colour and silhouette.

Do you remember the first time you were introduced to the Beatles? And/or do you have a special Beatles moment in your life?

I was very young, but I still remember when the Beatles invaded the US. Their music was everywhere! I remember the thrill of taking the plastic wrap off the albums and having a first listen. I still have some of those vinyls somewhere. I remember so clearly going to the movie theater to see A Hard Day’s Night when it opened. The screaming! A little on the terrifying side for a six year old. The theatre was awarding a life-size poster to that lucky kid who sang the best version of “A Hard Day’s Night.” I wanted that poster so much. I didn’t sing; I was too intimidated. And I did not get the poster…

When you set out to create the costumes for Pepperland, what was the process? Did you start by listening to the album or looking at old pictures/magazines?

I have to say, when I got the email, I thought it was a prank. Mark Morris AND The Beatles? It was too good to be true. Two of my absolutely favourite things. I started by going back and listening to the album – a lot! And then [I watched] every Beatles documentary I could find, and of course A Hard Day’s Night. Not just for the Beatles, but for the atmosphere, the flavour, the style of the time. There are great party scenes and lots of screaming teenage girls running after the band.

The process starts with a meeting with Mark. He always has very clear ideas about how he wants things to look, and how they should not look. No psychedelic colours and feathers. He described shapes that were earlier ‘60s. I loved the idea of simpler lines and shapes, using powerful colour.

Then the research begins. I look at hundreds of pictures…old magazines, books and – of course – early ‘60s movies. During a second meeting, Mark pulls images that he likes. After that, I do a first round of sketches containing several different groups. Mark edits again, and we make final decisions about fabrics and which dancers will wear what. Then it is all in the hands of the shop, which cuts, sews and dyes the costumes. I always hold my breath at first fittings.

The costumes are incredibly vibrant. Can you tell us about how you ended up selecting your palette?

As I was doing research on the shapes we were going to use, I noticed that so much of the colour was right off of the colour wheel. Bright, fresh, very young. The colours complement each other very well so that the amazing energy of the dancers really pops on stage. There is a reference to a mural-painted building on Carnaby Street: the colours on that building are what I based the palette on. The silhouettes are very clean, so it was fun to assign them colours. I liked punctuating all of the solid colours with some pattern to break it up a just a little.

As someone who’s lived in New York all her life, what’s your favourite neighbourhood for inspiration?

New York neighbourhoods used to have far more distinctive flavours where you could find second-hand clothing for a song, trims and old fabrics and outdated hardware. I loved rooting around through all that stuff, but that has mostly evaporated. Visiting cities like New Orleans and parts of Chicago, where development hasn’t been as aggressive, can still inspire with discovery.

When I moved to SoHo it was still under the radar. It still had a gritty, industrial feel to it. And there was so much going on with people involved in art and music. Canal Street had the best flea market, plastic stores, niche hardware stores and one of the best art stores in the city. I lived across the street from a high-end mannequin distributor and the neon sign maker. There was so much variety. It was great.

Got a favourite Beatles song?

There are too many favourites. “All My Loving,” “Any Time at All,” “Ask Me Why,” “I Don’t Want To Spoil the Party.” Those are the songs I heard when I was a kid and they remind me of that time. Life felt happy and new, and the future seemed very exciting.

Pepperland will be on stage at The Sony Centre for the Performing Arts on February 24th. Get your tix before it’s too late. You do NOT want to miss out on this truly scintillating performance that honours one of the greatest rock albums of all time!