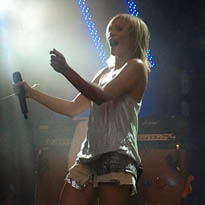 The saying “Sell in May and go away” is more than evident along Bay St. during the summer months as Toronto’s business elite pack up their BlackBerries and head for cottage country. Yesterday, however, it was surprisingly packed. Instead of old men in suits, FIVE THOUSAND hot and sweaty, twenty-something shutterbugs clamoured on -whatever they could – to get optimum views for the free Metric show, put on by Samsung Mobile.

The “secret” concert was officially announced at 6AM yesterday morning and Toronto’s Twittersphere went wild. (A contest to win VIP passes on @shedoesthecity received 93 retweets in just over five hours!)

While bankers cursed as they missed their trains to suburbia, we enjoyed front row vantage for a forty-five minute set.

By the end of the night I was sure I wanted to trade in my shabby BlackBerry for the new Samsung Android. I even had, what I thought was a legitimate list of reasons why it was a “better fit”. Too bad this morning my IT Manager squashed that dream when he reminded me that “we use Blackberries” and the company foots my bill!