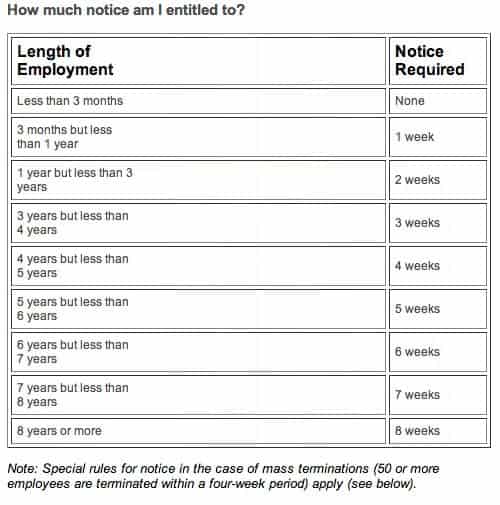 Employment rights: Do you know yours?

Do you know your employment rights? I thought I did…

The cafe I’d been working at for a little less than a year changed hands this month. The new owners worked every day, and because the cafe wasn’t busy, it was pretty clear they’d be cutting hours. I knew it would be best if I found a new job, and I almost put my two weeks in last Friday, but figured I’d wait until I found something else to replace it.

ALAS. I waited too long. They beat me to it.

I received a TEXT (yep, a text) from my boss on Saturday night. They needed to let me go. I had the least seniority and availability. They needed to save money by working more hours themselves. I could work this week if I wanted to. They were sad to let me go “:'(:'(:'(” (yep, those emoticons).

My immediate reaction was indignation. I was going to quit! I saw this coming! Leaving the job would have been fine, on my terms. But now I’d been “let go”? I hadn’t done anything wrong! And wasn’t the short notice against the law in some way? I didn’t think I could just be “let go” like that. So I polled my friends, asking how to respond, and what they thought my rights were.

Everyone agreed that the cafe had to give me at least two weeks notice. One friend suggested I might get severance pay for the two weeks I wouldn’t be working. Another suggested I might get the choice to work or take money in lieu. After soothing my grumps with a slice of pizza and a cup of red wine, I took to the internet to investigate. It didn’t take long to find out we were all wrong.

According to Community Legal Education Ontario, employers do not need to give ANY termination notice to employees who have worked for less than three months. Only one week notice is needed for workers who have been with the company three months to under a year. The “two weeks notice” rule is for employees who have worked one to under three years; the amount of necessary notice increases by one week for every year worked.

Bah. I’d been working for the new employer for less than a month, and at the cafe for less than a year. One week notice was totally legal…but what about their reasons? I was naively under the impression that you could only be fired for being a “bad” employee.

The Ontario Ministry of Labour told me otherwise:

“Under the Employment Standards Act, 2000 (ESA) a person’s employment is terminated if the employer:

The ESA (Employment Standards Act) does not require an employer to give an employee a reason why his or her employment is being terminated. There are, however, some situations where an employer cannot terminate an employee’s employment even if the employer is prepared to give proper written notice or termination pay. For example, an employer cannot end someone’s employment, or penalize them in any way, if any part of the reason for the termination of employment is based on the employee asking questions about the ESA or exercising a right under the ESA, such as refusing to work in excess of the daily or weekly hours of work maximums, or taking a leave of absence specified in the ESA. Please see the chapter on Reprisals.”

Whelp. Okay. I had no idea employment could be so tenuous! And I thought I had some understanding of employment law. Nope! Not at all. This whole thing was a real eye-opener for me.

Have you ever been “let go” or fired? How’d it go? I’m sure there are some real rough stories out there.

If you’re interested in learning more about workers’ rights, I’ve added some important definitions below from the Settlement.org, WorkRights.ca, and Ministry of Labour sites. Check out the sites for more information.

Severance pay is one week’s pay for each year of employment, up to a maximum of 26 weeks.

Termination pay is not the same as “severance pay”. See here for information about severance pay.”

The unpaid vacation pay must be paid either within seven days of the employment ending or on what would have been the employee’s next pay day, whichever is later.”

And now, the job hunt begins.