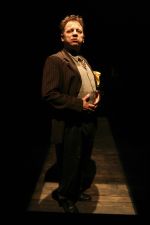 By Heather Christie
In a couplet: The first act is brill, the second act less so

Nonetheless Hydra is one hell of a show.

Have you ever cut off someone’s head and two have grown back in its stead? No? Oh, I guess it must not be as common an affliction as Hercules thinks, then. He has such a problem with exaggeration.

All mythical facetiousness aside, Eternal Hydra will undoubtedly endure as a fabulously many-headed serpent of a play, exhibiting those formidable qualities for which it—and its namesake–deserve to be both respected and contemplated at your own risk.

In short, the four wo/man production details the story of a long-lost manuscript, the people who both brought it into being, and the people who continue to renegotiate its meaning in the present day. Conversations take place on stage between past, present, imagined and real characters, the audience and the actors. Its language is highly wrought—not surprising for a play ostensibly about language—to such a degree that I often had to peel my jaw off the floor due to the brilliance of some of the dialogue.

Like the archetypical myths to which it alludes, Eternal Hydra borrows extensively from the post-modern canon, heralding—yet again—the death of both genius and authorship, the fallacy of history and proclaiming the birth—though in no such messianic terms—of the reader, scholar, interpreter, and publisher.

But what, you might say, does this play have to offer that’s any different from what the old boys—Derrida, Foucault, and the rest of the post-modern cigar club—have been saying since the fifties? There, dear reader, you have me stumped. While Anton Piatigorsky has surely outdone himself in his playwrighterly craft and Chris Abraham has directed superperbly, I don’t know what this play adds to the general dialogue on culture that is any different from the same things we’ve been batting around for the last half-century.

The second act dragged and was by no means as scintillating nor as cohesive as the first—though perhaps there is a unifying message buried somewhere in this belaboured monotony. That said, Liisa Repo-Martell gives a particularly smashing performance as scholar Vivian Ezra.