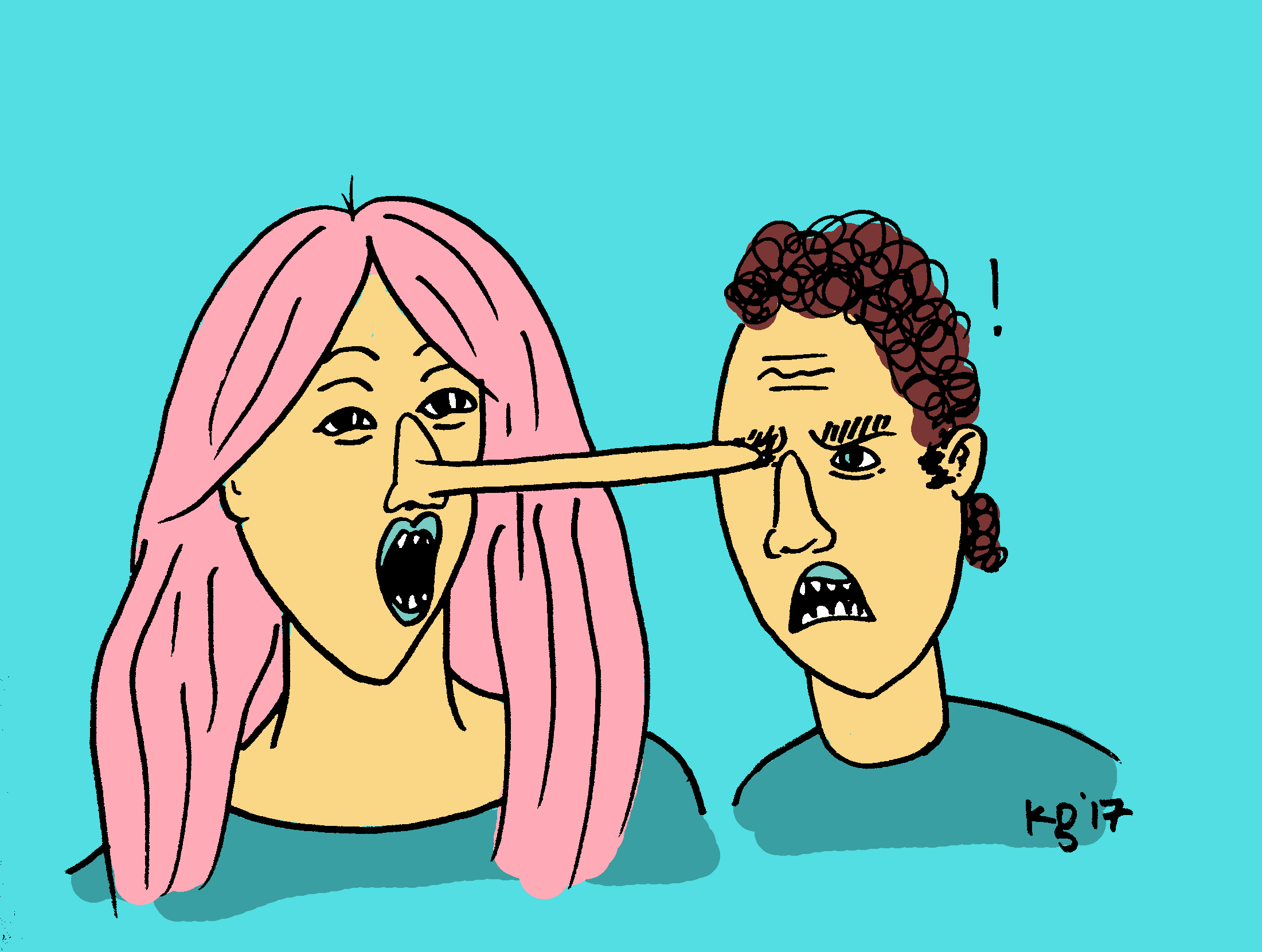 Ethical Dilemmas: When Their Compulsive Lying Becomes “Your Business”

Welcome to Ethical Dilemmas, where we hope to give you clear-cut answers for complicated problems. While “Jude” is keeping her identity a secret, we can assure you that with a PhD in Ethics, she’s a pro at carefully examining two sides of a story and weighing each move with a cautious code of morality. See past columns here.

I work with someone who is a compulsive liar. At first I didn’t think she was lying. I thought she had actually been through some awful experiences and now has a really good life. She talks about her rich American boyfriend and how they jet-set all over the world, how she owns a huge house and a BMW—but, also, how she was raped when she was younger, how her sibling was killed in a hate crime, how both her parents are dead…

If it were true, it would be awful, but co-workers have done research and have found no proof that any of this has happened (e.g., funeral announcements, obituaries). One friend picked her up at her “huge house” and it turns out it’s a basement apartment. She has missed work a few times because she was “hit by a car,” and/or had to “attend a funeral.” She told me that she was currently in a PhD program, but I checked with the school and she isn’t enrolled there.

I’m a bit scared of her because she is totally out of touch with reality. I think she actually believes that what she’s telling us is true. Should I tell my boss? Should I confront her? Should I let this go?

I’ve met people like this before, and I agree it can be pretty scary. It’s hard to know where the lies are coming from, or what their purpose is. I can understand the frustration and annoyance you’re feeling, but in situations like this, it’s helpful to ask yourself—why might this woman be lying? What purpose does it serve for her? And when does it become “your business?”

Right now, I would say that her lying is annoying but it’s not necessarily harmful in a direct way. If it were harmful to you, your employer, or someone else you know personally, then it may qualify as “your business.” If you think she’s hurting the company you work for (e.g., lying to clients about pertinent information, lying to co-workers about her performance, lying about her work or educational history), then you should let HR know that you have concerns. But if this is contained to lies about her personal life, then I don’t think it qualifies as “your business.” Yes, it’s worrisome, disturbing and frustrating, but it’s not your problem to solve.

So what are you to do now? How might you learn to work with this co-worker in a healthy way, given her unhealthy behaviour? A dual-pronged approach could be helpful; prong 1: EMPATHY and prong 2: BOUNDARIES.

Re: EMPATHY. It’s useful to remember that—to differing degrees—most people lie about their lives every day. I was talking to a colleague yesterday, and she mentioned that her friend had posted a pic of a beautiful necklace her husband gave her, with all of the usual obnoxious/flashy hashtags. Weeks later, the same woman came to her saying her husband had cheated on her and she wanted a divorce.

A recent article in She Does The City discussed a similar situation: a writer stated that most outsiders would think she had the perfect life and marriage, given what she posts and reveals, but in reality she was deeply unhappy and wanted to end her marriage. Social media is one of the worst outlets for false and highly edited information—for little (or big) lies told daily to our friends and families.

Why do we do this? Why do we paint a false/edited picture for others about our lives?

My guess is that your co-worker is doing this because she wants to “fit in.” She is telling people (false) things that she thinks they want to hear—things that she thinks make her “good” and “valuable” and “normal.” A PhD, a beautiful home and car, professional success, a loving partner. These traits and accomplishments “prove” to others that she is worth something. She also seems to be asking for sympathy; maybe she thinks that stories about past tragedies will encourage people to be more forgiving of what she sees as shortcomings in herself. They will let things slide because she’s the survivor of a horrible past.

These behaviours rarely develop out of nowhere. Somewhere along the line, she must have learned that this behaviour benefits her in some way. It served a purpose. Maybe her parents paid more attention to her when she made up dramatic events, or maybe more people wanted to be friends with her when she said she was rich, loved and successful. And this is where empathy comes in: belonging is one of our core needs as social animals, and she could be trying to fulfil that need—albeit in a very unhealthy way.

Try to put yourself in her shoes. It must feel terrible to always feel like you have to pretend, to tell people things about yourself that aren’t true. It prevents people from ever getting to know the “real” her, which could be another motivation for her lying. It’s a way of protecting herself, because people can’t love or hate you if they don’t know the truth about you. It must be a very lonely existence, and a painful one.

Re: BOUNDARIES. This is key in terms of reducing your annoyance and frustration. Put up a firm boundary between the two of you: don’t tell her anything about your life, and when she starts telling you about hers, gently let her know that you’re busy with work stuff and can’t really talk. Don’t research her lies or try to prove her wrong or reveal her as a fake. Be nice, be polite, but don’t engage.

It may seem cruel, but it’s a matter of self-preservation. It goes back to the fact that this isn’t really “your business.” The more you engage with her, the more you intertwine your life with hers. And I think that would be a dangerous path to follow.