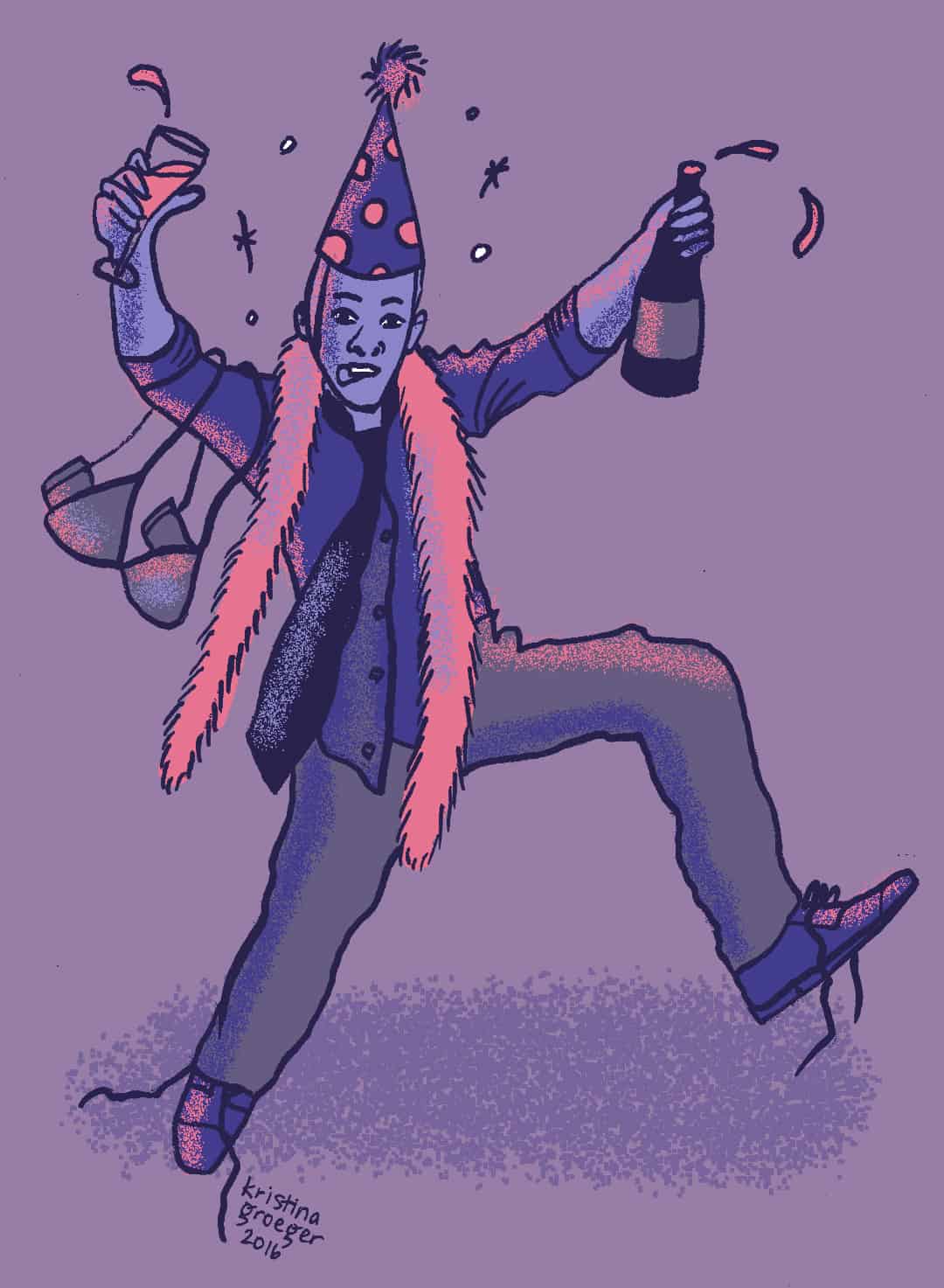 I’ve been at my job for a few months, and my office has a tradition of gift-giving during the holiday season. Bosses give their assistants gifts, and vice versa. My boss loves to drink, and most people give him alcohol as a gift because they know he will appreciate it. The thing is—I think he might be an alcoholic (and so do many other people at work), and I feel conflicted about giving him alcohol. I don’t want to give him a crappy gift that he won’t like (I know he loves Scotch—and isn’t it smart career-wise to “play it safe” with the gift?) but I also don’t want to support something that is causing him harm. Ideas?

You are a thoughtful and considerate person. If he is struggling with alcoholism, then my heart goes out to him and I hope he finds his way to sobriety. First: know that the gift you give him will neither lessen nor worsen his drinking. He is the master of his own destiny—if you give him tea and he wants Scotch, he will go find Scotch elsewhere.

Second: I too have a problem with the drinking culture in offices. Alcohol seems to be the default gift at office parties and even at get-togethers with new acquaintances. (“What should I bring to say ‘thank you for having us over’?” “Bring a bottle of wine.”)

It surprises me in this day and age that so many people remain completely insensitive to the diverse needs and practices of people in the workplace. We can tailor our gifts to friends because we know them fairly intimately. But we often don’t know our fellow employees all that well. Some could be sober, some could be kosher, some could be vegan, and we’d be none the wiser. Gifting alcohol at office holiday parties seems as strange and risky as gifting sausage (which I’ve seen at my office, I might add): why assume that all will appreciate, use, or even want that? What the hell is a vegetarian going to do with a sausage? Hideous.

In answer to your question: yes, I can understand that because you are new to your job, you don’t want to cause ripples by getting your boss some strange gift when you know the tradition is to give him alcohol. But here’s the thing: while you have no control over his (possibly alcoholic) behaviour, you do have control over your own, and you answer only to yourself. The frat-like pro-drinking culture in offices will not change or become weakened without conscious choices by people like you. I’m not saying that alcohol has to be nowhere in sight at office parties, but there should be other options that are neither conspicuous nor out-of-the-ordinary. People who choose not to drink alcohol should not have a spotlight shone on them because of their choice.

In short: I think you need to honour your feelings and get him something other than Scotch. If you don’t want to veer too far off course, you could get him a book aimed at Scotch aficionados. If that still makes you uncomfortable, then surely he has other interests? Get the man something that will fly under the radar as much as alcohol would. A Starbucks gift set of some sort? A gift certificate to his favourite restaurant? When in doubt, cool socks are lovely this time of year.

Help. I have an unfortunately(?) common problem. I am in love with a guy who is married, and he is in love with me. From the moment I met him, I felt like I knew him. Nothing physical has happened yet, but I think it will. As is usually the case, he is in a very unhappy marriage: they got married young because of family pressure, she treats him terribly, they never have sex, etc. They don’t have kids. She doesn’t want to divorce him, but she also won’t touch him. I know her and I don’t like her. He says he has never cheated before. I love him and I see a future with him, but I haven’t allowed anything physical to happen yet because I feel that once it does, the affair becomes “real.” I don’t know what to do.

Hmmmm…Yes. This is a tough one. More people have been in this situation than they care to admit. There are a few different parts to think about here, so I’ll try to break it down.

His marriage: It sounds like it is not all that healthy. Bear in mind, though, that you are only hearing his side of the story. His wife sounds awful, according to him, but would he sound just as awful according to her? Maybe. Marriages involve two people (or more, if you’re poly), and it’s rarely just one party who is responsible for the misery. So be careful not to paint him as the victim or the saint—he is neither. He is a normal, flawed guy whose marriage is falling apart. The question is, what has he done to fix it? Has he given it his all? If they’re not having sex, have they talked about why they aren’t? Does he want to divorce her? Answers to these questions will shine light on his character.

A “sexless” marriage is not an inherently shameful or bad thing. There are numerous, healthy reasons why a couple may choose that state. But “choose” is the operative word here. If a couple talks openly and decides that they are both happy without sex, then more power to them; however, if one is and one isn’t, new solutions need to be found.

If one partner says, “I don’t want to divorce you, but I also don’t want to have sex with you, and you can’t have sex with anyone else,” then that, to me, is cruel. One partner is then holding the other hostage, saying, “I know you have a fundamental need [for sex], but I’m not going to meet that need and I’m not going to let you have that need met by anyone else.” That attitude does not honour the spirit of what marriage is supposed to be. So the hostage would then need to a) try to talk it out with their partner and/or a couples counsellor until they are blue in the face; and then b) decide if s/he is going to get a divorce, and finally c) if no divorce, whether s/he could get this need met elsewhere (with or without their partner knowing) in order to stay sane and keep the marriage together. This can and should be done safely, carefully, discreetly, and thoughtfully. And, in my humble opinion, with a somewhat clear conscience.

Your behaviour: You say that physical contact will make the affair “real.” Surprise: it’s already real. It’s an emotional affair, which, to some cheated-on-partners, would be even more hurtful than a physical affair. So you need to take responsibility for the relationship you are already in with a married man.

While there are definitely some problems in his marriage, let’s focus on you. You are talking about much more than sex—you’re talking about love too. It’s easy to find sex elsewhere, but love is person-specific. You say you are in love with him, and he with you. Where to go from there? What is the moral path here?

Let’s get theoretical for a minute: There are three branches of normative ethics:

Some would say that it is good to take risks, to go for what you want, to follow you passion and love, to see two star-crossed lovers find their way to each other. Others would say that this is a major crossroads in your life, one that provides you with an opportunity to cultivate virtue rather than vice. Have empathy and compassion for his wife, who is an imperfect woman married to an imperfect man, whom she no doubt cares for, despite how little she may show it.

Have compassion for yourself, who finds herself in love with someone she cannot have. It is painful, and your heart will break, but you need to release him back into the world. Let him sort his life out, and let them sort their life out together. It is possible that they may divorce on their own accord. If they don’t, wish them well. If they do, you are free to pursue your love for him with a clear conscience. It will be sweeter because of that.