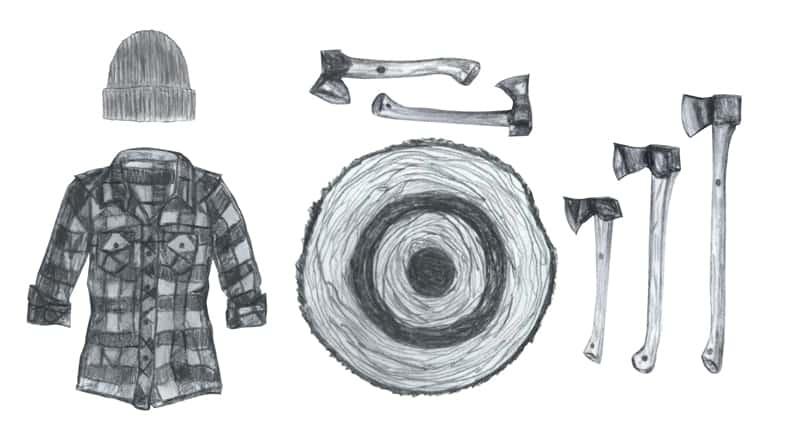 Everything you wanted to know about axe throwing, but were afraid to ask

I am not athletically inclined—at all. But I recently found myself in a decidedly (although unlikely) athletic scenario: with a group of friends, leisurely enjoying cold beer and cheering each other on as we hurled very sharp objects at targets (supervised and within the predetermined safety parameters, naturally). On a whim, a friend and I organized a Thursday night axe throwing get together (why not?) and were pleasantly surprised at the uptake. Anything to get through these grey Toronto winters, I suppose, because folks came out in droves.

Old friends converged and new friends were made as our various social circles crossed. If throwing axes doesn’t break the ice between strangers, I don’t know what does. Any notion of seriousness was ditched, and the home base of the Toronto Backyard Axe Throwing League soon felt like a house party. Friends shared beer, great music was turned up, and some enthusiastic axe throwing ensued.

Safety first: Waivers were signed, cash was collected, and everyone was given a brief throwing lesson before the competition got fierce—well, not too fierce. The setting is relaxed and, in complete contrast to the sharp things being tossed, actually pretty warm and fuzzy. When you’re not throwing against an opponent, you’re cheering on friends or fraternizing a safe distance behind the action.

Heckling and trash talking aren’t exactly frowned upon—as the competition inevitably heats up, so does the mocking—though considering the subject of your taunting is WIELDING AN AXE, exercise caution.

As with any sport, there is indeed a protocol and sportsmanship to axe throwing. And as often the case in sports etiquette, from the little I know about it, etiquette is often couched in safety. Not surprisingly, then, the cardinal rule of both the decorum and safety of axe throwing is to give the thrower plenty of clearance space, and to stay behind them.

Matches (three rounds of five axe throws) are played by two opponents. Each round begins by both players gently clinking axes, not unlike two boxers touching gloves.

If there is a discrepancy about an axe’s position, the thrower defaults to his or her opponent’s opinion (how very civilized!). If still in a lock, a fancy tool called “the device” (really, that’s what the pros at Toronto Backyard Axe Throwing League call it) is brought in to settle the score.

All in all, it was a super fun way to spend time with old and new friends alike. Happy throwing!