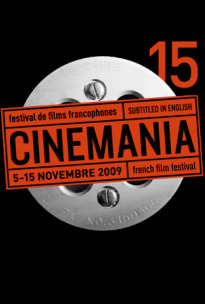 The French film fest Cinemania begins today, November 5th, running until November 15th. Almost 40 French films will be screened, beginning with tonight’s showing of Fais-moi plaisir, director Emmanuel Mouret’s latest film. He’s supposed to be the French Woody Allen, a comparison which could either be seen as a blessing or a curse. Personally, I’m a softie for an awkward ladies-man protagonist. In Fais-moi plaisir, the main character’s girlfriend insists he sleeps with his music student to get rid of his obsession for her, and the movie looks like a happy opening for the festival’s 15th year.

Montreal businesswoman Maidy Teitelbaum always had a passion for French films, which led her to found the Cinemania Film Festival in 1995. It’s the only Montreal film festival to show only French films, so for a lot of French filmmakers, the festival is their biggest means of exposure. For lovers of French film, it’s a unique opportunity to see French-language films that otherwise wouldn’t receive publicity. There’s also a wide range of the types of French films you can see at Cinemania, from old masterpieces to innovative films by new directors.

All screenings now take place at the historic Imperial Cinema (1432 Bleury), and highlights of the festival will include Eric Lavaine’s Incognito, a major hit in France, and Sylvie Verheyde’s Stella, a coming-of-age story about an 11-year old girl in Paris. Cinemania will close with Radu Mihaileanu’s Le Concert, set in Soviet Russia. It’s the story of a Russian Bolshoi Orchestra conducting prodigy, relegated to janitorial duties when he refuses to fire his Jewish musicians. The film is supposed to be filled with beautiful music and a ton of soul – definitely worth checking out.

For more information on Cinemania, check out cinemaniafilmfestival.com.