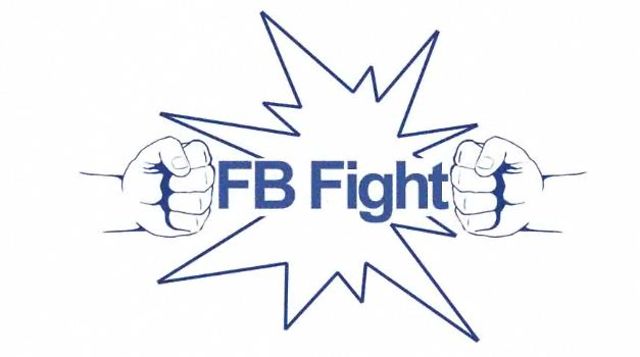 "If you want me to 'see the other side of things,' I want you to see my other asscheek as I walk away from your baloney-peddling ways."
Life Stories

Look, it’s 2014. We’ve all had that hot-under-the-collar moment where someone has come in to “White Guy” a facebook thread. You know what I’m talking about—a large scale derail of the topic at hand to fight, argue, and eventually stomp off with a huffy, “I guess white men aren’t ALLOWED to have an opinion anymore!” This gets extra special when two dudes White Guy each other—like a magical double star of white-hot patriarchal privilege, locked eternally in each other’s gravitational forces, with notifications expanding forever and ever into the ether.

Of course it’s best to not engage in this nonsense. As a veteran Facebook Fighter and unflinching feminist, I can tell you that your friend who tells you to “just forget it” is probably right… but also, sorry to Those Friends but fuck their calm, smug faces. You’ve got beef. Let’s get down to it. Feel free to send this to any Argument Man who wants to throw sand on the playground.

Don’t Fuck With A Woman’s Timeline: If you come to my timeline where I’ve posted something earnestly important to me, and start arguing that I’m full of shit, you my friend have just started a Facebook fight. You will regret this after my 1,000 word response about your useless observation that something is “reverse racism.” No, it’s not. We’re trying to have a nice chat here and you are ruining the party, buddy. Go back to Junior College.

The Devil Does Not Need An Advocate: If you want me to “see the other side of things,” I want you to see my other asscheek as I walk away from your baloney-peddling ways. If you’re not bold and strong enough to have your own opinion and stand by it, fuck right off, sir. This “other side,” which you assure me you are not a part of, did not hire you as its legal counsel. You owe it nothing, it does not need defending, goodnight.

No, I Will Not Hash It Out Privately: Private messages are the perfect place for people who don’t want to admit losing but are also afraid of ongoing conflict with another person. They are the domain of the shady. If you want to fight with me, do it on my turf. Whispering in my ear that you secretly agree with me while telling the world that you don’t is grade-A fuckitude that I will not abide by.

Offending People Sucks: Making people feel bad or upset is not the same thing as making a joke, getting a response is not the same as doing something funny. “Equal-opportunity offender” means asshole. Just say you’re an asshole. Own it or STFU.

No, We’re Not On The “Same Side,” You Are Disrespecting Me: Don’t appeal to my sense of goodwill and shared goals when your condescending, mansplaining self isn’t even bothering to process the things I am trying to say. Being an occasional ally does not make you my friend. Being half-right doesn’t make you never wrong. Threatening to pull your allyship over one argument pretty much cements that I’m right on this one.

Keep Your Gendered Nonsense To Yourself: Appeals to “logic,” saying I’m being “too emotional” or otherwise “hysterical,” “Now, now Ladies,” or any other gendered nonsense is going to get called out for the true BS it is. Your gender identity is a fiction created by cigarette ads and AMC shows. You are neither smarter, nor more logical, nor more dispassionately wise by virtue of your masculinity. My skirt does not sweep away logic and good sense. If you don’t understand that, consider googling “hysteria.”

Your Freedom Of Speech Does Not Come At The Expense of Other People: I want to send all the hardcore libertarian atheist arguing men to an island and let them fight each other to death, Lord Of The Flies-style.

Your Friendship is Not A Precious Gem: No, I will not step down “for the sake of our friendship.” Your friendship only means something if I value it. If you treat me like a child for my beliefs, the value of your friendship just dropped down to “Unpolished Turd.” Save me the effort and see yourself out. I said good day, sir!

If You Hate Feminism, Unadd Me Now: I will not tolerate your multitool of arguments that “prove” feminism is a conspiracy against men. The only conspiracy here is how the hell you got on my friends list in the first place.

Educate Your Damn Self: Don’t understand how sexism works? Google it. Read up for a couple weeks or months and get back to me. Understand that even then you have not 1/100th of the knowledge that people who experience it directly do. Appreciate that you are lucky—privileged—for this fact. Listen. Listen. Shhh—no, no talk-y—it’s Listening Time right now.

You Live In A Bubble: As much as you want to offend people, Arguing Guys are the very first to shriek off into the night about free speech, especially when everyone else agrees you’re dead wrong. Understand that as a completely non-marginalized person, you stomp around on people all day without noticing, yet also enjoy a safe, special, protected Bubble of Privilege that the world has given you and you alone. You are not “speaking truths” that “everyone else is afraid to say” you are deluded. Your world is a sham tunnel painted on a brick wall—don’t blame us when you bonk your head running towards it.

Yeah, I Am A Raging Bitch, And You Probably Can’t Take The Heat: I have at this point come to accept that every day I tick closer to another huge, disappointing argument with a guy I thought was a solid citizen. Another way to look at this is to see guys as Privilege Volcanoes, apt to erupt at any time, without warning. All you can do is keep your distance and try to avoid the fallout. I mean, sure, lava looks cool but you can’t drink beers and play video games with it.

You Are Not Alone; There Are 50 of You: You heard me. 50. So before you pout that this article is about you, understand that I have anywhere from 2-50 white dudes in a given month who feel the need to mansplain their way through thoughtful posts on such contemptible, misandrist subjects as rape culture, sexism and violence against women. So while you believe in your heart you’re a special, angry snowflake, remember that on my wall you are just one of a number and I don’t have the time.

We All Have Work To Do: Yes, I have been called out before too. I’ve fucked up before and realized that it was time for me to check my OWN privilege. I have a lot of privilege as a white woman and I work every day to be mindful of that. If you feel bad and guilty and ashamed and horrible and awful inside after asserting your opinion? There’s a good chance you’re in the wrong. There is redemption, but you gotta acknowledge that shit instead of trying to fight it away.

I’m Standing My Ground, So You Might As Well Quit: I’m never going to agree with you, for example, that “Men have it just as bad as women!” Or, “Misandry is real!” Or, “Christians are the most persecuted group in history!” Save your breath, homey. Greater minds than you have tried to “win.” You will not win. Your opinion is like a flea biting at my fat and mighty cankles. Be off with ye.

In summary, don’t fuck with Big Mama. You want to play rough with the big kids, you’re gonna get bruised. I’m not your mom, I’m not your girlfriend and I’m no gentle wallflower who will excuse any trespass against me, especially if the trespasser is “just playing Devil’s Advocate” to pass the time during a weekend away at their grandparents’ place.

To my fellow Facebook Warrior Women out there—read these statements and know you’re not alone. Unfollow, defriend and man slap freely at your own discretion. I will be here cheering you on like a perfect bitch.

"If you want me to 'see the other side of things,' I want you to see my other asscheek as I walk away from your baloney-peddling ways."