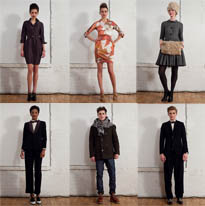 I never thought it’d happen. On March 22nd, only days after breaking out my flats and leather jacket and after weeks of dreaming about jean shorts, wooden wedges and floppy hats, I wanted it to be winter-coat season again.

It’s all Philip Sparks’ fault. His fall 2011 collection, shown at the Burroughes on Queen West, made me wish I could time travel back to December. Sure, I’d probably be freezing and wishing it were March 22nd, but at least I’d be adorable in my tweed kimono coat with the shearling collar popped up to protect my face and I could pretend I don’t care that with the wind chill it’s minus 30 degrees.

Sparks’ runway was filled with collars, gloves and beehive hats made out of mountain sheep fur that made me want to nuzzle my face in them (and not just because they were often in close proximity to a male model’s sculpted chest). The maple leaf printed cocktail dresses made me wish I had an afternoon tea to go to and the androgynous wool and linen tuxedo made me need to befriend a man who has an impending wedding so I could wear it and be his best man, reminiscent of Carrie Bradshaw in Sex and The City 2 (horrible movie but great tuxedo).

Don’t get me wrong, I’m not totally ready to bypass summer. I mean, I’m not one to turn down sunglasses or gladiator sandals, but the second we hit September 21st and we can officially call it fall you will find me wrapped in Philip Sparks’ shearling from head to toe.