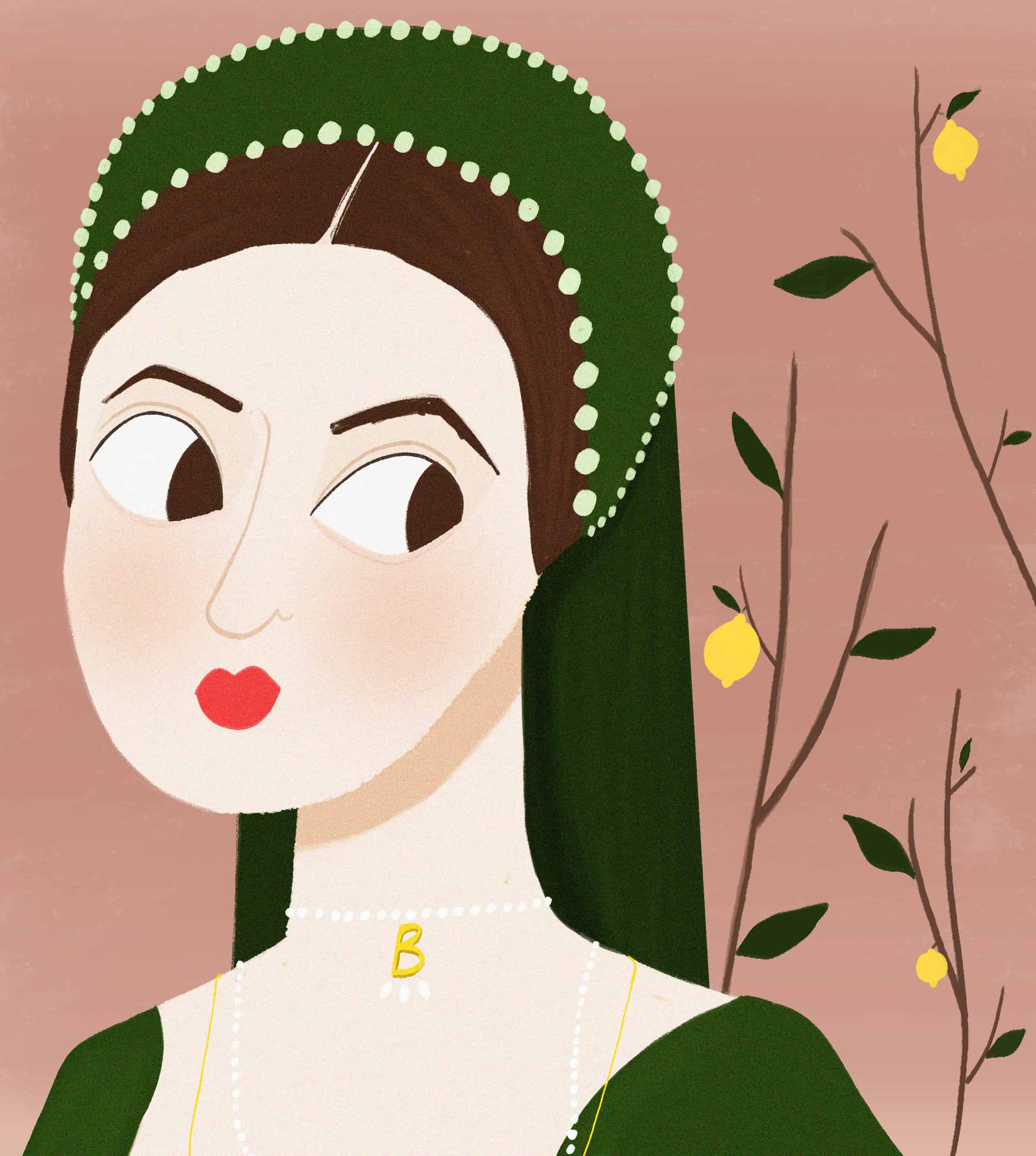 For this installment, Imma tell you about Anne Boleyn! As a child, I was so fascinated by this sixteenth-century queen that I dressed up as her for Halloween! Boleyn was born in Tudor England back in 1501. Her parents were Thomas Boleyn and Elizabeth Howard, savvy social climbers who were sort of like the English Renaissance version of Kate Middleton’s family. They too had two daughters of great renown who were so charming and lovely that both became lovers of the king at different times (this was before that “ovaries before brovaries” saying was popularized).

Anne was raised at the French Royal Court of King Francis I, where she was one of the queen’s ladies. Sending your kid across the English Channel to work for foreign monarchs was the sixteenth-century version of registering your four-year-old for French immersion. In short, it wasn’t neglect at all; it was good parenting. The Boleyns wanted Anne to be bilingual, so off she went to wait on fancy French people. This was actually a prestigious job at the time. To put things in context, one of the most important jobs in Tudor England was helping King Henry use the toilet. Commoners were considered too basic to the king’s bowels. Kingly bowel exposure was a privilege.

When Anne returned to England, she was in her early twenties. In Tudor England, nine out of ten people died before age forty. As a consequence, rich girls were routinely married off in their teens (to maximize baby-making time). Being single at twenty-two was quite taboo. When she arrived at British Court and caught the king’s eye, Anne was basically the OG Carrie Bradshaw, seducing her sixteenth-century Mr. Big. They didn’t have TV back then, so the saga of Anne and Henry became the soap opera that engrossed Britain.

Anne’s years of studying sexy French people made her very fetching. She was an accomplished dancer who loved music and had a legendary wit. She read books and loved to discuss big ideas. She’d even lived at the French Court at the same time as Leonardo freaking da Vinci. That means Ms. Boleyn was exposed to some of the finest minds in the history of the world. Her entire teen years must have been like a series of really excellent TEDx Talks. The king couldn’t help but fall for her.

Now, in the love story of Henry and Anne, there was one little wrinkle; Henry was already married. His wife was a Spanish princess named Katherine of Aragon. She was also a devoted spouse; so devoted, she actually sewed Henry’s goddamn shirts (which, by the way, does not make sense to me. This was the time of The Divine Right of Kings, so surely the queen could have outsourced her sewing to someone else).

But Henry wouldn’t let a little thing like marriage hold him back. He was a single-minded man who only wanted two things: to have a son and to f-ck Anne. Consummating his relationship with her could have accomplished both, but Anne didn’t want to become a discarded mistress; she wanted her child to ascend to the throne, and that could only happen if Anne became Henry’s bona fide AKA Queen of England. So Anne did something no one ever had the nerve to do for fear of the consequences: she withheld sex from the king. That lady made it clear she wouldn’t be naked for Henry unless he divorced Queen Katherine. I’m pretty sure those women who wrote that dating book The Rules stole their entire philosophy from Anne Boleyn.

Apparently, withholding sex worked for Henry. He wrote little love letters to Anne about how badly he wanted to kiss her ducks–Tudor slang for boobs–and ended his letters with little hearts. Aw! It was the sixteenth-century version of sexting!

A major obstacle came when the pope refused to bless Anne and Henry. He was all, “Dude! You already have a wife, remember? Her name is Katherine of Aragon!” Henry’s response was basically, “Katherine? Who dat?”

Henry ultimately solved the problem when he and Anne brought The Protestant Reformation to England. Historians have recorded Anne’s keen interest in Protestantism (she liked it while it was still heretic, which means before it was cool). Anne was known to protect and support Protestant refugees from the continent, so it’s no surprise she and Henry decided the way to get what they wanted was to create a new religion for England, one where the king could lead the church in lieu of the pope. Unsurprisingly, Henry’s new religion, known as The Church Of England, agreed his marriage to Queen Katherine was null and void. Annulment in place, it was time to marry Anne and have all the sex and babies! Yay!

In 1532, the thirty-something Anne Boleyn became Queen of England. And, at first, she rocked her crown. She didn’t care that the peasants still preferred Katherine of Aragon (who was living out the remainder of her life in exile from court). Instead, Queen Anne flaunted her contentment by making her royal motto “The Most Happy.” That was the sixteenth-century version of ending a tweet with “#Blessed.” Yeah, Anne was a gloater.

Anne fell pregnant pretty quickly and the whole court rejoiced. Could this be the son Henry had prayed for? Nope! The baby was a girl, and they named her Elizabeth.

Anne was a loving and attentive mother, even though her queenly duties kept her too busy to be in her child’s life on the reg. Per royal custom, the child was raised by a wet nurse at a separate estate, but Anne regularly wrote affectionate letters to her little girl (like FaceTiming with your toddler when you’re away for work).

While Anne loved little Lizzy to pieces, Henry was confident that a queen was incapable of running the country, so the two kept sexing regularly, which did result in pregnancies. Sadly for Anne, those pregnancies ended in miscarriage or stillbirth.

The infant loss dismayed Henry. When he married Anne, he thought he’d found himself a boy baby-maker, but their only surviving issue was a girl. He divined it was time for a new wife.

This time, Henry wasn’t content to divorce his queen or get the marriage annulled. Instead, he became one of history’s most abusive husbands and decided to have Anne executed. Henry set up a sham trial where Anne was falsely accused of adultery with several parties, including her own brother, George (historians agree that totally didn’t happen, because ew!). Anne denied the charges, and so did most of her alleged lovers; however, one of the accused men was tortured until he gave what was likely a bogus confession. And voila! Henry had the legal justification to murder his wife!

In 1536, Anne was executed at the Tower of London (the scary fort where lots of famous people got killed). Because Henry fancied himself merciful, he decided to commute Anne’s sentence from being burned at the steak to beheading. What chivalry! When you hear stories like that, it’s obvious why Henry self-identified as a humanist. I mean, only an effing gentleman would ensure his wife received the second most terrifying mode of execution.

Now, if I were ever sentenced to death by a husband, my last words would be a series of expletives cursing the asshole and praying for his penis to fall off. But Anne Boleyn was cool-headed enough to protect her legacy, little Elizabeth. In her last words, she praised Henry VIII as “a gentle” monarch and asked for God’s mercy before offering up her neck to the executioner. This did a lot to soften people’s feelings of animosity toward Anne, ensuring Elizabeth would receive proper care.

After Anne’s untimely death, Henry did go on to father a son with his third wife, the pious Jane Seymour. But sadly, little Edward did not live to adulthood.

Henry spent his entire reign fretting over the idea of a woman ruling England. He worried ladies weren’t fit to lead, but Elizabeth wasn’t just an adequate monarch; she was far better than her philandering, abusive father. When Elizabeth ascended to the throne, she was every bit her mother’s daughter. She won impossible military battles, created a new age of prosperity for her people, and became a patron of the arts. Shakespeare in Love didn’t make that up! Lizzy really was a fan of Shakespeare plays!

To this day, the reign of Elizabeth is known as The Golden Age. I don’t want to canonize Liz, because she did approve of the slave trade, and it’s not like she ended the practice of beheading her enemies. But Henry would still be pissed to know the wife he had executed produced a far more effective monarch than he ever was.

Anne Boleyn is a dead lady with a serious legacy. She was instrumental in bringing The Reformation to Britain, became queen for a mere thousand days, and mothered a daughter who reigned as the most powerful monarch in Europe for over forty years. Anne Boleyn isn’t just part of history–she made history.

Want to know more about Anne Boleyn? Check out these resources:

BBC History
History Extra
Biography.com
The Life and Death of Anne Boleyn: The Most Happy