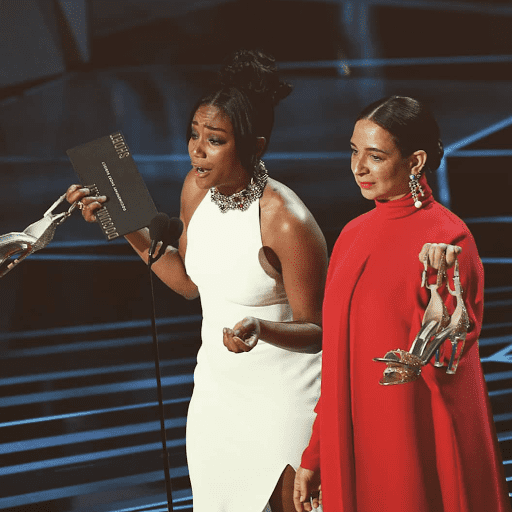 Our Favourite Feminist Moments From The 2018 Oscars

So the 2018 Oscars were not the paragon of gender equality we might have hoped for. This year marked the 90th anniversary of this awards show, but just because the Oscars are older, that doesn’t make Hollywood’s most famous awards show any wiser. Both Gary Oldman and Kobe Bryant took home statues, despite their respective sexual misconduct allegations. To make matters even more regressive, there was not a single female winner in any of the technical categories. And while some of us had hopes Rachel Morrison, the first woman ever nominated for cinematography, might take home a trophy for her exemplary work on Mudbound, that didn’t come to fruition.

Now, it’s easy to get gloomy about the exhausting quest to dismantle the patriarchy, but it’s also helpful to accentuate the positive. While the world is still far from perfect, there was definite progress at last night’s Oscars. In the spirit of optimism, here’s a roundup of our favourite feminist moments from the 2018 Academy Awards. It might be the perfect antidote to your Monday blues!

Ryan Seacrest has been accused of sexual misconduct by his former stylist, Suzie Hardie. In light of this disturbing development, many film fans were dismayed to hear the E Network was planning to send Seacrest to the Oscars anyway. This was supposed to be the year when Hollywood was finally becoming woke to sexism and sexual abuse. Obviously, that made E’s decision even more disappointing. But you know who didn’t disappoint us the way E did? A bevy of celebrities who boycotted interviews with Mr. Seacrest. Sure, folks like Donald Sutherland and Andy Serkis still spoke to him, but way more people decided to bypass his sketchy ass. The list of boycotters includes luminaries like Margot Robbie, Octavia Spencer, Ashley Judd, Sandra Bullock and The Big Sick screenwriters Kumail Naijani and Emily V. Gordon (aka the married couple that best personifies #RelationshipGoals). Time’s Up, E Network! This is the era of feminism and accountability, and that extends to entertainment journalism.

Pixar’s adorable film Coco took home the prize for best animated feature! For those of you who aren’t down with what’s cool at preschool, Coco takes place in The Land of The Dead. It’s a super cute movie, which I know because I watched it on a plane out of boredom but soon found myself transfixed! Rooted in Mexican cultural traditions, it’s a technicolour ode to music, family and following your dreams. And if the film itself weren’t heart-warming enough, the producers gave a speech that could melt even the deepest snow bank in Winnipeg. Said producers spoke of their desire to create a world where “all children grow up seeing characters in movies that look and talk like they do.” In a time where the freaking president spouts offensive myths about Mexico and her people, it’s wonderful to see a film that defiantly revels in the beauty of Mexican culture. Let’s hope the children who grow up watching Coco will also grow up to be nothing like Donald Trump. I’m crossing all my fingers and toes on that one!

There are two types of people in this world: people who believe Ms. Haddish is a national treasure, and people who are wrong. Last night, one of the world’s funniest women used her platform to rock a traditional Eritrean dress on The Red Carpet. Haddish sweetly explained the look was a tribute to her father, who knew his daughter was destined for greatness and encouraged her to embrace her Eritrean identity. Haddish told reporters that sporting the exquisitely embroidered dress, which came complete with a black cape, was a way to “honour” her fellow Eritreans. It was super empowering to see a woman forgo the rigid Western beauty norms of The Red Carpet in order to wear a gorgeous dress that had significance to her. You do you, Tiffany! Because you’re awesome! Can’t wait to see you in Girls’ Trip 2.

Tiffany Haddish was the gift that kept on giving for Oscars 2018! Halfway through the night, she and fellow comedian Maya Rudolph presented not one but two awards in their bare feet! The actresses came on stage holding their heels in their hands, complaining about the discomfort their stilettos were causing. It was a superb send up of sadistic female beauty norms and one of the funniest jokes of the night. The pair followed that site gag with lots of adorable witty banter about white dudes with clipboards (please YouTube it, as my description does not do this joke justice). Finally, Tiffany used the opportunity to recruit Meryl Streep to play her mother in Girls’ Trip 2. That’s right, the intrepid Ms. Haddish gave Meryl Streep a job offer in front of millions of viewers. Now that’s what you call networking, ladies!

Tiffany and Maya were such a charming team that Twitter exploded with fans demanding the duo host an entire awards show together. Take note, Academy of Motion Picture Arts and Science! These two would be orgasmically good Oscar hosts. Jimmy Kimmel is fine and all, but Maya and Tiffany bring palpable charisma. If the Academy is serious about Time’s Up, what better symbolism than hiring women to host your awards show? Maya and Tiffany forever!

The Time’s Up Tribute Video

While some performers sported Time’s Up pins on The Red Carpet, the movement really received its time to shine during the ceremony. Towards the end of the night, Harvey Weinstein accusers Salma Hayek, Ashley Judd and Annabella Sciorra took the stage, introducing a video about their campaign to establish gender and racial equality in Hollywood. The video featured sage words by men of colour and a diverse group of talented women. Director Greta Gerwig implored aspiring filmmakers, “Go Make your movie,” promising she would see these hypothetical films. Ava Duvernay went one step further and advised people make low-budget movies using their phones (BTW, I’m planning to do that this weekend if any of you are down!). However, my favourite commentary came from comedian Kumail Nanjiani. Najiani began by explaining that some of his favourite movies growing up were directed by straight white guys, and yet Nanjiani, a Pakistani-American immigrant, could relate to them. Next, he called out white guys for not trying harder to relate to movies that aren’t about them. He cheekily assured all the white guys watching at home that relating to other people’s stories “is not that hard.” Amen!

Jordan Peele Won Best Screenplay For Get Out

History was made at the Kodak Theatre last night, y’all. For the first time in 90 years, the screenplay Oscar was awarded to a black person. Jordan Peele took home a shiny gold trophy for Get Out, his woke AF, anti-racist horror movie about an evil white family who run a body-snatching ring, murdering people of colour in an effort to live forever. Get Out is the rare film that manages to be profound, funny, thought-provoking and freaking terrifying all at the same time. It’s a rarity in Hollywood, a truly original story.

The now two-time Oscar winner used her speech to promote diversity in the film industry. After thanking her family and her Three Billboards colleagues, the actress asked every single female nominee–in every category–to rise. She spoke of how this talented group of women writers, directors, producers, actors and cinematographers all have stories to share. But stories cost money to tell, especially on celluloid. McDormand therefore called upon the powerful men in the audience to “invite us to your offices” to pitch our work. What can I say? Sometimes you need a rousing speech by a two-time Academy Award winner to make you fall in love with feminist activism all over again…