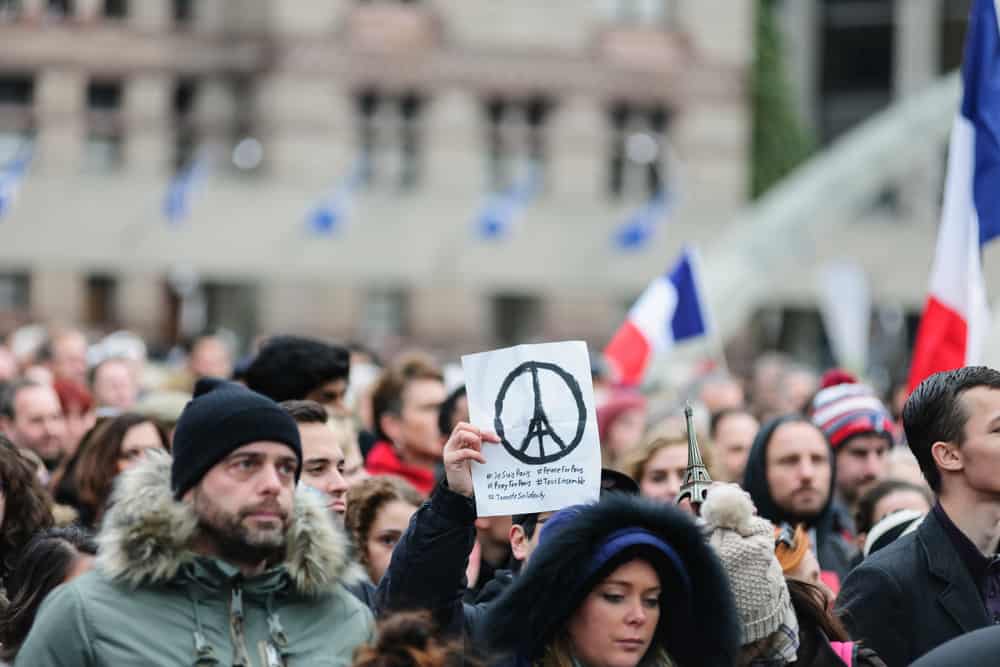 FEAR AND LOATHING IN THE 6IX

As I was coming home from picking up groceries on November 13, 2015, I heard an unusually charged diatribe. Normally, I know what to expect from this walk down Queen West: a cloud of Belmont smoke outside Nomad, a few people conversing with their small- to mid-sized dogs with the sort of reverence otherwise reserved for firstborns, and a smattering of bro-talk emanating from dudes who somehow wandered a touch too far from their usual King Street haunts. That is my normal; it’s my comfort zone.

That night, however, I heard something shocking. As an unwritten rule, errands are run with as little conversation with strangers as possible. Naturally, then, I was surprised to discover someone was talking to me. Not just talking to me, mind, they seemed…angry. I snapped out of my pre-dinner stupor and immediately looked around to see if I’d accidentally stepped on someone’s fur baby, which would certainly explain their hysterical reaction. When I couldn’t find a four-legged friend, I looked up to ascertain what the matter actually was, and that’s when I heard the word that often finds its way into everyone’s lexicon when a large-scale tragedy takes place: “terrorist.”

Yup. As expected, this person was shouting insults at me, a 5ft 3″ display of pure terror. To be fair, I was wearing combat boots, which may have caused the clearly upset individual to lash out at a perfect stranger, armed with a rather intimidating array of panko, boneless chicken thighs, and pasta sauce. Years of learning what the appropriate response to such a confrontation is, I proceeded to lower my gaze, speed up a touch, and walk away from the vitriol being spewed in my general direction.

After all, this bastion of righteous anger couldn’t have possibly known how my heart sank at the first mention of the horrific news, how my mother immediately phoned me with fear in her voice and lamentations for those who will forever be affected by the events of the day, and how I spent the afternoon simultaneously worried sick about both my friends in Paris and those who would undoubtedly face unfair criticism in the coming days, weeks, months, and years.

This self-appointed ambassador for victims of people with no remnants of humanity couldn’t know that my family had housed two refugees from Afghanistan in the late 90s, and how the eleven-year-old girl in our care couldn’t sleep near the windows — she feared bullets and other shrapnel, because the Taliban had robbed her and her people from not just their homes, but also their right to an uninterrupted and restful sleep.

When I told my boyfriend about this unexpected verbal attack, he was incredulous. After all, these sorts of things just don’t happen in a city of endless (and, somehow, simultaneous) acceptance and apathy. Hamilton, maybe, since it’s a city fairly well known for its prolific hate crime problem. But Toronto? How can the city of the province’s first female (and the country’s first openly gay) Premier be the setting for such an ugly encounter?

Of course, it would be naïve to assume Torontonians aren’t capable of bigotry, but hearing it first-hand was still a great shock. My boyfriend convinced me to think of the incident as an unfortunate, but rare, experience and we continued on with our weekend. Surely Canadians are better than this. Surely WE’RE better than this.

On Sunday, a mosque in Peterborough was set ablaze. On Monday, a Muslim woman was violently attacked and verbally assaulted. Being a complex human being, I allowed myself to feel both horrified and vindicated. At last, being one of the 6.3 million visible minorities in Canada came with a perk: the ability to predict violence, prejudice, and unfair accusations — perhaps the shittiest superpower ever, I imagine.

Considering the atrocities faced by the victims of the attacks in Paris and Lebanon, the refugees from Syria and Iraq, the murdered students in Kenya and the traumatized children of the unnamed Torontonian woman, I cannot and will not consider myself a victim. I will assume my aggressor was overcome with fear due to circumstances beyond his control. I forgive him for making me anticipate bodily harm, and I thank the universe for providing me a safe space with those who care for me, with the only remnant of the encounter being a story to tell.

There’s no other way to say this without resorting to a tired cliché, but it’s a reminder every one of us needs: every time you lash out at someone just because they COULD be “The Bad Guy,” the terrorists win. That’s literally their whole schtick! They WANT distrust within communities, so those targeted out of fear or anger feel like there’s nowhere to turn. They hope Muslim youth in Western nations will feel so out of place that they seek out the very people responsible for manufacturing a hateful environment. They expect powerful nations to turn away those they’ve displaced and brutalized. They want us to anticipate an attack if we wear hijabs, to demand endless red-tape for those trying to escape the clutches of evil.

They want fear, not compassion; turmoil, not peace.

To my fellow Canadians, and all citizens of nations targeted by those whose only religion is hate: I know you’re afraid. I am scared, too. Don’t fall into these traps they’ve set up for us. Be kind. Be courageous. Be a symbol for everything they hope to stamp out with their frequent displays of hatred and chaos; only then will they be defeated. Only then we will breathe easier.

There is enough terror in this world. Let’s not respond to hate with more hate.