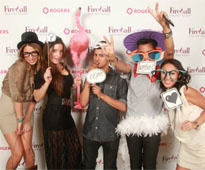 Fireball 13: Through the Looking Glass – Party-goers come together for a cause worth toasting

…No really, I was running late to this year’s annual Fireball Gala: Through the Looking-Glass. Running down King St. in 6-inch python pumps and a floor-length lace overlay is never a good idea; but in the words of the infamous white rabbit, I could not bear to miss one more minute of the much-hyped Fireball 13. Thematic events are usually an instant draw and throw in the fact that, since its inception, Fireball has raised over $930,000 in donations to benefit those Sheena’s Place, an organization dedicated to supporting those who suffer from eating disorders.

Fireball 13 was the cherry on top of my week. Well-heeled glamorati filled the venue, transforming the Hoxton at King and Bathurst – loved by Queen St. urbanites to King St. bankers alike – into a wonderland-like world with plastic flamingos hung from the ceiling and mouth-watering treats displayed on tables in mountainous forms. Parkdale’s finest and everyone’s favourite restaurant, Parts and Labour was responsible for the lavish selection of oysters and other goodies. While more than 400 guests enjoyed masterfully spun remixes from the DJ booth, I slithered my way through the party and soaked in the diversity of the crowd, from Harajuko girls to Tom Ford-clad men.

In between rocking a faux moustache for the photo board, dancing to music reminiscent of my Bat Mitzvah with Cityline’s Tracy Moore (the evening’s Emcee), and sipping delicious customized cocktails, I had the pleasure of staring at Johnny Depp’s face while the Tim Burton remake rolled onscreen. It all felt so fantastical that I wondered if I would at some point cross paths with the Queen of Hearts herself. Luckily, I still have my head.

A photo taken with PR darling Jennifer Lui and TorontoisFashion.com’s Richard Fabregui, captured the feel of the evening in its entirety: over-the-top with a hefty dose of surrealism that would make even the Cheshire Cat grin with envy for not having been there.