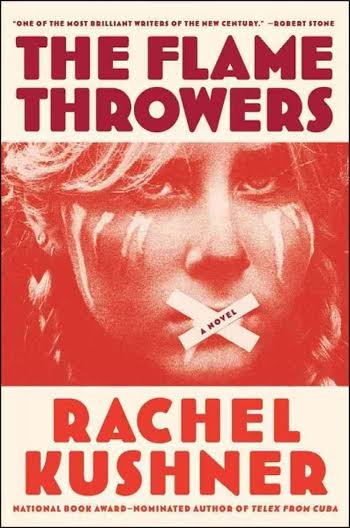 So, what have we learned from the polar vortex? That Canadian winters mean BUSINESS. That it’s possible for some parts of Canada to be colder than Mars. I don’t know about you, but when winter gets serious I don’t fight it; I hide inside with a good book. If you have a fireplace to curl up next to, all the better. My roaring fire comes courtesy of Netflix, but hey, whatever works. Here are some books I’ll be bringing with me:

The Flamethrowers, by Rachel Kushner
First up, a book with a warm title and a need for speed. Reno is an artist in her early twenties who sold her Moto Valera motorcycle to move to New York in order find her place in the ’70s art scene. She falls for Sandro, an older, more established artist and younger son of the Valera family, made wealthy from his father’s tire and motorcycle company.

The story alternates between Reno’s life as she races across the salt flats, becoming the fastest woman in the world and gets caught up in the revolts in Rome, and the story of Sandro’s father—his childhood and the founding of the Valera empire.

It’s got art, motorcycles, political activism, and is set in New York, Milan and Rome. Plus it was recently recommended by Lena Dunham and Judy Blume. What’s not to love?

The Pure Gold Baby, by Margaret Drabble
Next, a first-person account from an atypical narrator: the gossipy—if well-meaning—Eleanor. Eleanor is fascinated with her neighbours, Jessica Speight and her daughter, Anna. Set in London, the novel spans from the 1960s to the present day.

When Jess was an anthropology student she took up with her married professor. The affair didn’t last, but resulted in a child, leaving Jess a single mother. Affectionately called the “pure gold baby” for her sunny disposition, Anna has special needs. Though the exact diagnosis is left deliberately vague, it seems she has Down’s Syndrome.

Eleanor observes from her home as Jess becomes a desk-bound anthropologist in a tight knit community and negotiates how to best take care of her daughter in the swingin’ 60s. There are wild parties, a series of lovers, and a fascinating overview of the British mental health care system as it’s evolved over the past 50 years.

The Demonologist, by Andrew Pyper
Finally, if you’re a fan of thrillers, this one’s for you. Professor David Ullman specializes in demonic literature, with a special affection for Milton’s Paradise Lost. One afternoon he receives a strange visit from a woman who offers him an all expenses paid trip to Venice if he’ll take a look at a mystical “phenomenon” for her while he’s over there. David’s an atheist, a skeptic, and not interested, but after a messy split with his wife, David and his daughter hop on a plane.

When they arrive in Venice everything seems too good to be true. David investigates the “phenomenon,” which appears to be a man possessed by a demon, and shortly thereafter, his daughter dies under mysterious circumstances.

David is lead on a quest across North America searching for clues to the name of the demon who took his daughter. If he can find his name before the time is up, he has a shot at getting her back.