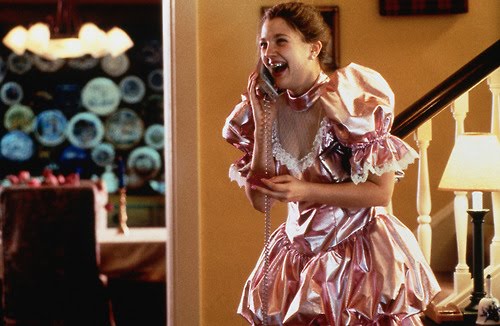 I started fantasizing about what my first kiss would be like when I turned eight-years-old.

I realized then that kissing was a symbol of love and a display of affection, and not one adult trying to revive another adult who appeared to be completely conscious. My parents were never overly touchy-feely with each other and when I say “overly” I mean they did not touch. At all. Whatsoever. I can’t remember a single time where I witnessed them hugging, or canoodling, or Frenching. After they divorced I found an old picture of them in a photo album where my mom was kissing my dad on the cheek and he was grinning like an idiot. I thought; holy shit. They used to do THAT? I don’t even know who they are anymore.

Consequently, my concept of puckering up was based on teen movies from the 90’s (which had seriously shaped my perception of romance).

I, like Drew Barrymore, had Never Been Kissed – and I desperately wanted to be. I wanted an entire stadium of students to watch as a gentleman lovingly made-out with me for five minutes straight. I wanted a dude to get paid by an asshole trying to date my sister to seduce me and then use that money to buy me a guitar (like in 10 things I hate about you).  I wanted to kidnap my teacher and tie her up and then boink a boy in another room like in Teaching Mrs. Tingle.

“Will my first kiss be an unforgettable, movie-making moment?” I pondered this as I gazed into a mirror and applied red lipstick I had stolen from my mother.

I got the answer in the spring of 1999. I was 13-years-old, I had gotten my period, I had orgasmed via humping the couch cushions and I was ready to become a woman. But in order to become one I knew I needed to find the Angel to my Buffy. The Cory to my Topanga. The Dan to my Roseanne. The Gabrielle to my Xena. And I thought that time had come when I entered my first game of Spin the Bottle.

It was at my friend Natasha’s birthday party. The cool ones were already playing the tango of the tongues with their randomly selected companions. Feeling inspired by peer pressure, I decided to join in on the sloppy, intimidating, non-fun. I sat in the circle of disgrace and watched as friend upon friend awkwardly crawled toward another friend in order to exchange saliva. Occasionally it appeared as if they didn’t touch lips at all and were merely rehearsing for a stage play of sorts.

Every time I saw two of them make contact, I had one thought: I hope I don’t get mono.

The pecks were generally light and quick, until one pal of mine was dared by the group to do it OPEN MOUTH and she proudly accepted the challenge. We all stared in awe as their jaws unhinged, their tongues flailed, and they made an impressive attempt to eat each other alive. It only lasted for ten seconds but it felt like a lifetime of torture. I was certain someone’s lip would be bitten off and they would be scarred for eternity. When teeth get involved, people, YOU NEED TO TAKE PRECAUTIONS.

Then suddenly, it was my turn. Who will it be? My mind reeled. Which cargo pants-wearing MAN was going to take my face virginity? A lot of melons had tried in the past, but they were only fruit.  And no matter how many lips I drew onto them I knew they were never going to be human.

I took the empty Jones Soda bottle into my hands, gripped it tightly for a moment, looked deep into it’s soul, and made a wish that it would land on Kent, my elementary school crush/potential soulmate. Kent and I had been math partners that year and although we had chatted a whole bunch about isosceles triangles the topic of us getting married never came up. This is my chance, Bottle. Don’t let me down.

I placed it on the carpet, spun it with all my might, and crossed my fingers that it would select the soon-to-be father of my children. It began to slow two boys before Kent. OH MY GOD IT’S HAPPENING, my brain screamed with joy. IT’S LIKE I’M IN ‘SHE’S ALL THAT’ AND HE TOOK A BET TO DATE ME.

And then it stopped. The bottle ceased to spin.

It made a choice and the choice was… not Kent. It was Jonathan. Bow tie-wearing, always angry-looking, hair-slicked-to-the-side-with-gel-clearly-belonging-to-his-father Jonathan. My eyes bulged out of my head. HIM, BOTTLE? HIM? Why have you forsaken me Jones Soda? All I’ve ever done is drink you and tell my friends to do the same. This is betrayal at its worst!

I dropped my head in disappointment, and in embarrassment for my future self. I took a deep breath in and tried to relax my tense face but I couldn’t. I knew this was meant to be more unforgettable than it was going to be. My first kiss, I lamented, with… Jonathan.

When I looked at him and we made eye contact for the first time I was relieved to see he was as disappointed as I was. He didn’t want it either. Who was he hoping for? I wondered. We sat in silence for another second until one of the members of the circle yelled; “Do it already!”

Peer pressure striking again. It was my achilles heel. I made the sad crawl over to Jonathan and when I got to an inch of his face I paused, closed my eyes, and imagined it was Kent.

Then I leaned in and placed my lips on his.

When I opened them back up he was smiling and surprisingly, so was I. It was a strange blissful moment that we both shared and although we weren’t each other’s ideal, this was still special. No matter how you looked at it. His lips were soft and moisturized, which I appreciated. In terms of kiss ratings, I would give it a 7. It was sweet. There wasn’t too much tongue. It was the perfect length. And it was easy. I know now that an “easy” kiss is a good kiss.

Then, before I knew it, the game was over and I was on my way home. As my mom drove us back to the house, I sat in the passenger seat and thought about Jonathan. About how surprised I was that I wasn’t actually disappointed. That I felt positive about the whole experience, even though it wasn’t what I expected. That it wasn’t necessarily a movie-making moment, but it was definitely unforgettable.

30 films and series on Netflix that celebrate love and lust. What are you in the mood for?