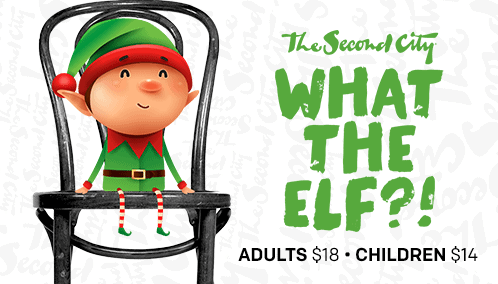 For The Kids: What The Elf?! @ The Second City This Month

This holiday season, take a break from the hustle & bustle and bring the fam down to The Second City Mainstage (51 Mercer St) for big laughs and loads of fun!

WHAT THE ELF?!? is a hilarious, musical extravaganza for kids, parents, grandparents, siblings and reindeer of all ages. Bring all your little elves down to the Second City for a fun & interactive afternoon at our legendary mainstage theatre, where laughing, dancing and singing along is highly encouraged! WHAT THE ELF?! was based on the script by Leslie Seiler, and was created by Nigel Downer, with contributions by Bianca Alongi, Rabiya Mansoor, Rob Lewin, Connie Manfredi, Wilfred Lee, and Kyah Green.

Matinee performances are at 2 and 4 p.m. run throughout December until January 5th. Get your tickets here.

Tags: Comedy, For The Kids, Second City Mainstage, Sketch Comedy, The Second City, What The Elf?!