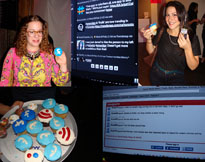 It was the #SMW (Social Media Week) event to be at this week. PR agency NKPR hosted ‘TRUTH DARE DOUBLE DARE PROMISE TO RETWEET’ and so SheDoestheCity was there to enjoy Skyy Vodka cocktails, Coronitas, Facebook and Twitter-topped cupcakes.

It wasn’t just icing and booze, although that is usually enough to get us to mobilize anywhere, there was also a speaking panel and a live tweet board. Behind the mic was Mike Farrell, SVP Research & Strategic Insights for Conversion, Oscar winner Paul Haggis, whose name has been viral all week regarding his dramatic  Scientology slam-down, but who took pride in telling us how social media has helped spread awareness for his charity Artists for Peace and Justice, Toro’s Editor-in-Chief William Morassutti, and of course the lovely Natasha Koifman, or the N and K in NKPR. Wise words were spoken, texted, tweeted, twisted, photographed and spinned upside down.

Sooooo, In honor of Social Media Week Toronto, the rest of this post will be in the form of a Twitter convo between SheDoestheCity contributors Louisa Cohen and Becca Lemire:

@louisaevecohen tell me about it giiiiirl, sooo nice, but didn’t know I was supposed to wear black #dresscodefail

@beccalemire don’t even worry, you look dope – you’re standing out SO much in neon pink pucci and tiger frames @natashankpr is always dressed so well, love her leather

@beccalemire I’m at the tweeting station sending out NSFW confessions – cute touch, guess which 1 is mine!!!

@beccalemire lets meet @corona booth that is set up, then head to the @SKYYVodka bar, drinks look amazing

@louisaevecohen YA! And bartender is cute… looks familiar!

@beccalemire OMG did you see those delicious looking #cupcakes with all social media symbols?

@louisaevecohen YES I just ate a #facebook 1, blue icing all over my fingers! Speaking of.. @SYDNEYBLU is playing some kick-ass tunes