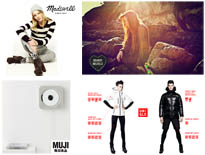 Four NYC stores we wish we had in Toronto

I was in New York City last weekend coincidentally for “Black Friday” weekend (I like to call it Pink Friday instead, also known as my birthday). Just like any girl dragging her boyfriend to NYC, I was most looking forward to shopping. Shopping on Broadway, to be precise. With that in mind, I bring to you: four stores every Torontonian needs to go to in America.

Brandy Melville is the original Aritzia with insanely slashed prices. Originating in Italy, the brand moved to Los Angeles and New York City in 2008. They’re known for slouchy “one size fits all” items made from natural fibres like cotton, viscose, wool and angora. I don’t remember anything being over $80. They’ve spread all over Europe with over fifty stores – why not Canada?

Muji is the miniature Japanese version of Ikea at Ikea prices. I could have a field day in this minimalist shop that carries everything from stationery to hand soap to shelves to luggage. Muji is all over Asia and Europe, and enjoys avoiding Canada. Their image is rational, clean, ordinary yet extraordinary and maybe a little po-mo. Guess that doesn’t fit Toronto’s image, does it?

Uniqlo is the best store in life. I used to dismiss it for its simplicity, now I realize it’s got more cred than any other shop on the block. Uniqlo is the Japanese version of H&M (yes, at H&M prices). Not only do they have a Canada-friendly heat tech line, but they also have a soon-to-be extinct capsule collection with Jil Sander called J+. Move over, H&M, we’ve had enough of your shady quality. Uniqlo is the new everything, for men and women. In New York, every other person was carrying a Uniqlo bag and it’s for a good reason. Uniqlo, if you’re not coming to Toronto, then at least stop ignoring that thing called e-commerce. I miss you already.

Madewell wasn’t very popular before Alexa Chung. Since her exclusive line, the brand has taken off internationally. I can’t think about Madewell without thinking about Alexa and her British accent. Madewell has comfortable and basic clothing with a touch of luxury to it, and their shoes blow my mind. You can buy Madewell online and probably pay $30 in customs and duty. Or they could just open a store in Toronto. It’s about time.