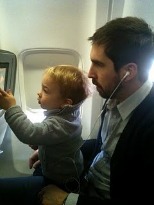 Free airfare or the comfort of your own seat?

Which would you choose?

The right answer of course, is ‘free airfare’. Are you kidding? Flying ain’t cheap.

But if money were no object…

You see, one of the perks of being under 2 feet tall is that you get to fly for free. Pretty sweet bonus. For the little traveler. Not so much for his poor parents who he stomps, jumps and climbs over during the 4 hour (plus 1 hour delay of sitting on the tarmac) flight. Sigh.

He wants his own cup. He wants his own cutlery. Of course, he was going to want his own seat. On the way to Kelowna, Cy actually kicked me out of mine. That’s right. hH gathered all the strength that his 30lb body could muster and pushed me out, while exclaiming “mommy, out.” Desperate to avoid a scene, I wasn’t in much of a position to argue. Turns out this mile high club was a boys-only club. Luckily for me, the flight wasn’t sold out and there were two unoccupied seats at the very back of the plane, right beside the washroom – complete with wafting aromas of eau de crap and all other offending smells those toilets have to offer. Gross, I know. But frankly, it meant I could squeeze in a couple chapters of my book, so I wasn’t exactly complaining.

It’s one thing to fly with a newborn, all neatly swaddled and sleeping in your arms, and a whole other story to be entertaining a busy – and awfully energetic considering it was supposed to be his bed time – little toddler.

We survived. We arrived. Albeit exhausted. All things considered, Cy really was good for the most part – he only had one meltdown. We brought lots of toys and books (neat little trick courtesy of my friend Catherine – buy a bunch of cheap $1 toys at IKEA and reveal a new one each hour so child never gets bored!)

Happily, this was likely Cy’s last ‘free flight’ as he’ll be turning 2 soon and officially losing his ‘infant’ status. It’s not like having his own seat is going to ensure my hair won’t be smeared with yoghurt and my shirt bejeweled with cookie crumbs in the near future, but at least if he does start throwing tantrums, I can just pretend to be traveling alone and stuck sitting next to a possessed child.

Maybe the attendants will take pity on me and upgrade me to First Class this time? Hmm…