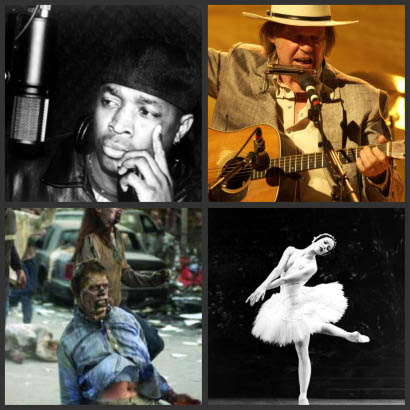 TIFF is getting out of the theatre and into the streets in Yonge-Dundas Square!  There are a ton of events to choose from, and literally something for everyone—into opera?  You can go see Canadian soprano Measha Brueggergosman for free!  Into rap?  Check out Chuck D of Public Enemy fame hosting the closing party!

There are also daily events at Yonge-Dundas Square like the TIFF In Concert film series, which is a mix of music-themed films, short films from the National Film Board and other musical flicks by Canadian film makers.   Highlights include Neil Young hosting the screening of the Neil Young Trunk Show on September 14, and Joan Baez performing before the screening of her new American Masters documentary.

TIFF Shhh! features classic silent films with live musical accompaniment (just like in the old days!).  The National Ballet is also performing for free, there are free swing-dancing lessons, a Toronto Zombie Walk and a roller-derby exhibition—yes, this is for real, it’s not just some wonderful dream!

Finally, there is a free screening of the Cadillac People’s Choice Award winning film, voted on by Festival audiences.  This one is always good—last year’s winner was Slumdog Millionaire, the year before was Eastern Promises.  This year’s winner will be announced September 19th; tickets are available on a first-come, first-served basis that day so keep checking tiff.net

Now, for your convenience, here is a handy-dandy calendar to must-see free TIFF events at Yonge-Dundas Square this year.

Saturday, September 12: TIFF concert film series: The Harder They Come, Toronto Zombie Walk with George A. Romero in attendance, with free screening of Night of the Living Dead