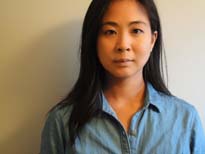 Frieda Luk, director of American Sisyphus, on our ability to consume and our failure to communicate

Frieda Luk is a storyteller. It’s in her eyes, which are inviting, and her smile, which is warm. And it’s in her voice as she describes going to buffets and skipping almost everything except the ice cream.

“You get all these things and you want all of them,” she says. “But I go around once and then I get kind of full. I remember trying to skip everything and going straight to the ice cream. It’s interesting. It’s like we can consume so much but can never quite get everything. Buffets are basically conceived for you to consume.”

It’s an interesting topic because a buffet happens to be the setting of her new short film, American Sisyphus, which is set to premiere at the Short Cuts Canada section of this year’s Toronto International Film Festival. The film, about a young girl stuck at a table listening to the banal chitchat of her mother (who is oblivious to her boredom) while her father maroons himself at the buffet, pokes fun at our ability to consume and our failure to communicate. But beyond that, it highlights a problem that all of us are bound to face: one where we get stuck, where we know something’s wrong but aren’t exactly sure how to go about fixing it.

“I want people to not necessarily recognize the situation as something they’ve been through, but to connect to the universal idea of being stuck in something that’s alien but also very familiar,” says Luk. “It’s okay to get stuck on these things. I’m not sure if it’s a positive note, but I want people to take away that it’s okay we can’t necessarily communicate properly because we’re trying. And that trying is very important.”

The film, written by Noah Pritzker with cinematography by Meg Kettell, took about seven months to come into being. And as Luk knows, it’s no small feat to go from idea to script to film…to TIFF, no less.

“It’s a ginormous task, like opening a new business,” she says. “It’s very daunting and when it’s all over you never want to do it again, but you also kind of do.”

It’s that drive that keeps her going.

“It’s exciting just to be a filmmaker at an event that supports films,” Luk says of the festival. “I feel so privileged already; it still feels like a giant treat.”

Luk was born in Vancouver and went to grad school in Toronto, but now lives in New York and attends film school at Columbia University. She was late to the film game (“I didn’t grow up with 8mm short films when I was eight,”), but her love for it is blatant. She puts elements of her life in her films, and sees movie-like scenes in everyday experiences.

“Life is fairly absurd,” she says. “I was on a bus on Bay Street the other day and some guy started to sing “Swing Low, Sweet Chariot” and wanted everybody to sing with him. He was clapping and saying, “Everybody!” but nobody joined in. It was so bizarre and cinematic.”

When TIFF is over, Luk heads back to New York to continue film school, where she plans to keep writing, keep shaping ideas, keep honing her craft.

“You’re on set struggling for 15 hours on a student budget, but you’re all there for the work itself,” says Luk. “You end that exhausting day and it’s like you’ve climbed a mountain. And after it’s all finished you think, ‘Maybe I can climb another mountain.’”