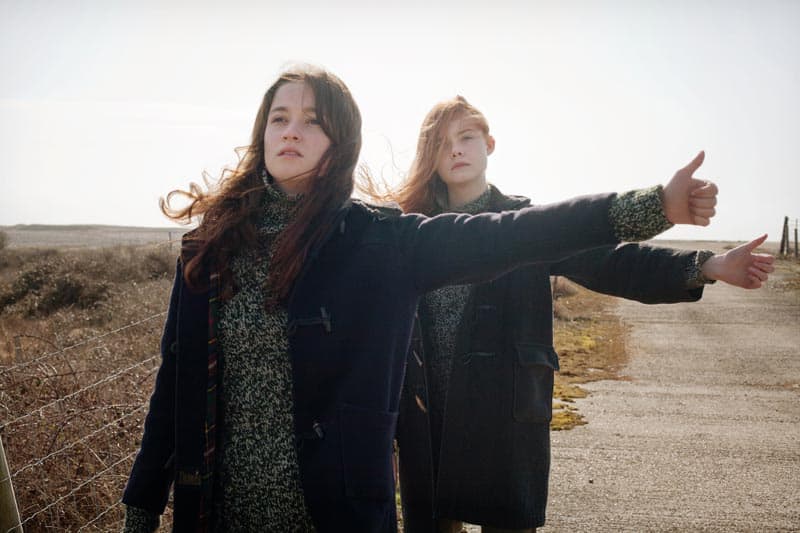 "Young people are often underestimated about what they are thinking about, and what their real concerns are."
Events & Culture

Do you remember that best friend in high school who you did everything with? And that time in your life when you began to see how big the world was? Ginger and Rosa, a new film by Sally Potter, focuses on that intense and powerful chapter of youth.

Written and directed by Sally Potter, Ginger and Rosa is set in London in the early 1960s, and follows the friendship of two teenage girls as they begin to explore big adult themes like love, sex, family, and politics. Between late nights out with boys, playing songs on the jukebox, and shrinking jeans in the tub, Ginger (Elle Fanning) and Rosa (Alice Englert) are inseparable. But as they mature, things begin to change; while Ginger marches in peace rallies, protesting the threat of nuclear war, Rosa becomes preoccupied with a rather naive idea of romance.

Potter describes this connection between friends as “the first big passionate relationship outside the family.” It’s during this type of youthful friendship that “a lot of subsequent relationships are being figured out,” Potter continues. “How you relate, how you love, what your loyalty is, what betrayal is, how close can you get. They are very intense relationships.”

Not only is Ginger and Rosa an enthralling study of adolescence and intense female friendship, but it’s also a historical story, taking place during the Cuban Missile Crisis. Recalling her own memories of this fearful time, Potter explores how the characters respond to the threat; through Ginger, we see the crisis from the point of view of a teenage girl.

“Young people are often underestimated about what they are thinking about, and what their real concerns are,” says Potter.

Beyond remembering her youth, Potter draws a modern parallel between how young people today respond to global warming. “I’m very aware of the effect of climate change on younger people: wanting and trying to do something about it and having a feeling of absolute terror that the world is going to melt,” she says. Although the Cuban Missile Crisis may be a difficult concept for those of us born after it to grasp, we can definitely identify with the feelings of anxiety—and can understand Ginger’s frustrations with the unfeathered adults around her as she pledges to protest. “I think there is a fear of apocalypse with every generation,” says Potter. “But it takes different shapes.”

The story of Ginger and Rosa is emotional and gripping, giving us a careful and captivating portrait of London during that unsettled time. It’s a period that is strikingly different, perhaps even bleak, when compared to the exciting mod and hippie movement that would arrive like a burst of noise and colour within a few short years. “We searched every nook and cranny of East London to find those locations,” Potter says. “The London of my childhood still had bomb sites.”

Ginger and Rosa is a beautiful film that is stylistically captivating, but I would be remiss if I did not mention the absolutely mesmerizing performance by Elle Fanning. “I did a huge casting search and 2,000 girls auditioned,” Potter says. “Then I met Elle Fanning, and that was it.” With an absolutely spellbinding performance, you would not know that Fanning was just 13 years old at the time of filming.

"Young people are often underestimated about what they are thinking about, and what their real concerns are."