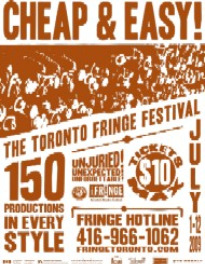 I’m trying to cut back, I really am. YES–I know it’s unhealthy, but I just needed a quick fix. Just get off my back about it, ok?! You just don’t know what it’s like being an irredeemable Fringer.

Yes, folks, as you may have guessed from last’s week’s preview, the Fringe Fest is here. 150 shows playing over ten days, some delivering fireworks-and-fab theatre, some—well—make you wish you’d stayed home. This weekend, I saw seven—count ‘em—shows. And by Sunday at midnight, I did indeed feel like a bit of a junkie.

The binge began Saturday afternoon with Zdenka Now! at the Royal St. Georges Auditorium. Despite what else could be said about ZN!, Precious Chong is quite the thespo-chameleon: throughout the performance she becomes an Inuit rapper, an LCBO worker lacking self-actualization, a British woman with a husband suffering from dementia, a closeted GM sales rep, the list goes on. ZN! is framed as a talk show hosted by former Yugoslavian TV star, Zdenka, but that’s about where the cohesion ends. The video transitions between segments—rather than adding coherently to the overall body of the play—broadcast superfluous clips that clumsily distract the audience during Chong’s costume changes. Adam Lazarus, ZN!’s director, does not adequately rise to the challenge of putting together such a multi-faceted, interesting, and complicated piece dealing with diversity and prejudice in a mixed—socially, culturally, and otherwise–society. Sure, you’ll get a few laughs and a few stories that play to the heart strings, you’ll even get some ideas to chew on, but this production still needs some work.

Next up was Weaverville Waltz at St. Vladimir’s.

Actually, next up was a Thai take-out pic-nic on the lawn at St. Vladimir’s and then searching desperately for a garbage receptacle that was neither overflowing nor Saran Wrapped shut. Then, Weaverville Waltz.

This is another one-person. Randy Rutherford, who wrote and performs it, does an absolutely beautiful job as both a performer and story-teller. A simple chair and table make up the whole of the set, and although Rutherford is dressed in plain clothes he vivifies his characters so completely that you could swear there are five different actors on stage instead of one. WW is rife with the heartache of growing up, moving on, and returning home to fruitlessly search for a past that has disappeared forever.

Sunday dawned ripe for another day of Fringing. From 4pm until midnight, I camped out at the Factory Studio Theatre seeing the good, the bad, and most definitely the ugly. Curtain for Dirty Girls was at 4pm and it was some of the most fun at the theatre I’ve had in awhile, not just at the Fringe. Kat Sandler has put forth a hilarious script about a germophobic and slightly fey king looking for a clean virgin to wed, and yes, as Beatrice stated in her preview, there is indeed a pie fight in addition to a mud fight! Go for the fun.

Tim Murphy’s Blind to Happiness —playing after Dirty Girls– is the phenomenal one-man-show (another!) about a 32-year-old 4-time-school-drop-out dishwasher who is somehow happy as a clam—when he’s not worrying about turning into his recently-deceased alcoholic, blind, and diabetic father. Murphy seamlessly glides between characters and delivers a story that undoubtedly makes audience members re-examine how they choose to define happiness. A thinking-person’s show.

Then along came Baggage. I should have bagged it. Shaun McCarthy delivers a self-indulgent funeral march through his rather bland dating history; he could have made the performance interesting, sassy, and funny, but it most certainly wasn’t. A chunk of the audience—McCarthy’s friends, presumably–laughed uproariously at otherwise oblique moments which made the whole production feel like an inside joke to which most audience members were not privy. The play ended in some drippy spiel that rang of a glorified personal ad that. Maybe I’m bitter because McCarthy’s gayness entails that I do not meet the specifications of his List, but it’s more likely that this was just a dry hour-long personal therapy session for McCarthy and McCarthy alone. If anything, this show reminded me why I didn’t go into psych.

Next up was In a Magic Kingdom—yet ANOTHER one-person show. This one by Celeste Sansregret meditated extensively on death and her experiences with it in her life. There was some great story-telling and—again—the content was deeply autobiographical, but it lacked a certain je-ne-sais-quoi. Sansregret is a charismatic enough actress, but the show just ain’t got the spark.

That said, In a Magic Kingdom was infinitely better than what came next, Bear and Fox’s Big Adventure in Married. Good god. While I appreciate that watching such remarkably horrible theatre is a rare privilege, I wanted to pull my hair out and use it to wipe my tears of embarrassment and rage off of my face. Bear and Fox—monickers for Kip McCormick and Shelby Rochelle (Paul Frank and Mel Paraboo, respectively) who run a musical marriage counseling session. The music is fine, and even at times sparingly clever. But Kip and Shelby’s inane banter makes you cringe with its idiocy. While ironically poor counseling could easily be the subject of quite a few knee-slappers, Frank and Paraboo extinguish any humour’s short life with a pair of molten-hot needle-nose pliers and a clumsily-spiked baseball bat. And then they asked the audience—all six of us—for questions. I believe a tumbleweed rolled across the stage, screaming LIBERTY! To be fair, The Casio keyboard and its mad beatzz was sweet, I guess.