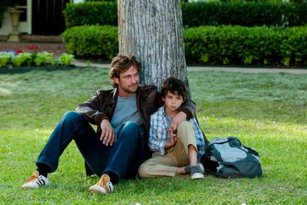 Gerard Butler shares his dreams of fatherhood while telling Jen about his new film Playing For Keeps. AW!

Gerard Butler often gets listed as one of the sexiest men alive. The Scottish actor also has a longstanding reputation for being a bit of mischievous bad boy, but when we met with him to talk about his new film, Playing For Keeps, Gerard “Call me Gerry” confessed that he really wants to be a dad. #Awwww.

He plays George, an ex-soccer star who is finally settling down and taking responsibility. In a somewhat desperate attempt to rekindle their relationship, George starts coaching his son’s local team. Little does he know, he will become wriggling bait for the throngs of sexually frustrated soccer moms that cheer, and jeer, from the sidelines. Denise (Catherine Zeta-Jones) and Patti (Uma Thurman) are just two of the ladies hellbent on, well, nailing the swarthy coach. In traditional romantic-comedy fashion, George is flustered with the attention but also easily seduced; hilarious complications ensue. While he fends off the aggressive moms, he realises that his heart belongs to his ex-wife Stacie (Jessica Biel.)

But the film is more than competitive team sports and sexually frustrated moms. With a smile and a twinkle in his eye, Gerard explains that “…it’s a movie about second chances and accepting our own imperfections.” Although one may not be easily inclined to feel sorry for a man whose big problem is being bombarded with beautiful women who want to tease his groin, Gerard empathizes with poor George. “He is both chaotic on the inside and he causes chaos wherever he goes. And yet, he’s trying his best. He’s trying to take the right path, but there’s a lot of people who want to get their claws in him.” Hmm, does Gerard deal with the same issues?

I prodded further and asked Gerard what his advice is for men experiencing a midlife crisis. His response was poignant and sincere. “Life is about growing up. You want to keep that child in you but you have to get rid of that ego, you have to get rid of those quick fixes. You have to learn about commitment and sacrifice. First, family, love, friendship and then career. It’s tough in this crazy life that we live…there are so many temptations and distractions.” Gerard! Are you trying to turn us into a pile of goo? It’s working. We can’t wait to see this guy pushing a stroller.

Gerard loved working with the stellar cast of amazing women (It’s not often that star wattage like Uma, Zeta-Jones and Biel come together in one flick. Who wouldn’t love that??) but it was little Noah Lomax (George’s son, Lewis) who really captured his heart. “Every time I make another movie with kids, I realise more and more that I’d love to have kids. I have a real affinity and connection with them. I developed a very strong relationship with Noah and by the time this movie finished, it broke my heart to say goodbye. He gave such a great performance.” OMG…what are you doing to our fantasy??? Here we are still visualising being roughly undressed by an armoured Tullus Aufidius and now you’re throwing lullabyes and nappies into the mix. Oh, but it continues, “The themes that this film touches on: Fatherhood, connecting with your kid and the beauty that comes out of that, for sure you are left moved and maybe inspired to go in that direction.” Did someone teach you how to say all the right things to a woman? Officially a puddle on the floor.

I needed some dirt, something a little quippy about soccer moms and the crazy scene that is suburban youth sports.

“Competitive parents, nasty aggression from the sidelines…Gerard, what did you think of this insane scene?” I asked with a smirk. C’mon, gimme something juicy, Gerry.

“I couldn’t believe how excited and passionate people are reliving their childhood through their kids. There is a beautiful commercial from the Olympics, everyone should YouTube this commercial. What moms do, what they sacrifice for their kids. Soccer, swimming, hockey: they devote their lives to their children. I havent’ shown it to anyone because I end up in tears but I think everybody should watch it and appreciate their moms…we all don’t do enough of that.”

ARE YOU FOR REAL??? Sexiest man alive with a smooth Scottish accent wants to be a dad and thinks that everyone should take time to appreciate their moms. Let’s all take a moment to watch this Procter & Gamble commercial from the Olympics. Do it for your mom. Do it for Gerry.

Playing For Keeps is now playing at theatres everywhere.