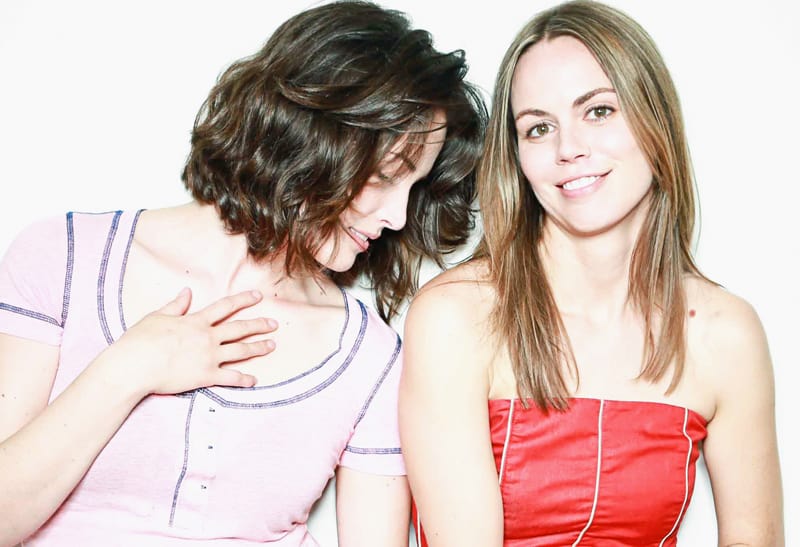 "It was like this most profound messed up slumber party with strangers."

To promote their upcoming production of “Stop Kiss” at this year’s Fringe Fest, Melissa Hood and Kate Ziegler did something rather unconventional. They parked a Love Confession Booth smack in the middle of 159 Manning’s annual NXNE BBQ. (For those who aren’t aware, this is a house party that makes media headlines each year; it’s messier than sticky ribs and greasier than the dirtiest burger.)

Diana Son’s award-winning play, Stop Kiss, is about two female friends in Manhattan, Callie (Hood) and Sara (Ziegler), whose relationship intensifies into something more than friendship. But even if your girlfriend hasn’t made your groin tingly or your heart flutter, everyone has experienced an uncomfortable secret or emotion.  The Love Confession Booth at 159 Manning was a way for partygoers to let go of some of those feelings that twist us up, make us feel dirty, guilty or ashamed. I’ll let Melissa take you inside the confession booth and share with you some surprising anecdotes and discoveries from the night.

Is there anything you secretly wish you could confess?  Be honest. Something deeply personal that is always there, gnawing at your insides, burning a hole in your heart, weighing down your thoughts?

Perhaps your bad habit. Your secret crush.  Your latest dirty transgression? Got something?

Now, consider sharing this secret with a complete stranger at a party. Not in your wildest dreams, right?

That’s what I would have thought too, until last week’s Love Confession Booth. It was the brain-child of co-producer Arianne Robinson, an original idea that was both risky and exciting. We set up our booth and wondered how many people would actually confess something true.  But I set aside my nerves as we invited people at the event to take a break from the live music and come up to our confession booth (a tiny room in the back of McCready’s well-lived-in house) to confess a secret on the theme of love. In exchange we guaranteed compassion and secrecy (and also provided each confessee with a customized piece of art by Lee Richmond and a word of wisdom or two, if desired, from our rag-tag cast).

To my astonishment, what started as a fun and casual experiment turned into many hours of meaningful communication between complete strangers. At one point, we had a line-up outside the room. Imagine, one by one, strangers coming in and taking the time to share a true story, unburden themselves of a past pain, or ask for advice on a difficult situation. There was laughter, there were tears, and I think there may have even been one or two life changing conversations. I can only speak for myself, but I know I walked out of the room that night feeling changed.

It was like this most profound messed up slumber party with strangers.

Although my lips are sealed on the juicy details, my mind was blown by the number of people who opened their hearts to us. I realized that everyone is secretly dealing with something BIG. Not only that, but a lot of the stuff that people were talking about was universal and related to the themes of our play:  love; loss; happiness; risk; chance; fear of never getting the life or the love that you want.  I found myself learning things about myself and Callie Pax, the character I’m playing in Stop Kiss, just by listening to the honest stories people came in with.

In the play, my character develops an unexpected attraction for her new female friend Sara.  She’s never been attracted to a woman before and finds it difficult to get the courage to confront and share her love.  Eventually Callie musters the courage to kiss Sara, but it takes a tragedy for Callie to realize how deeply profound her feelings are, to accept herself and commit to fighting for the life that she wants.

Sometimes it takes a tragedy for us to open up and discover the most important things in life.  Sometimes it’s easier to open up to a complete stranger than it is to a close friend. Sometimes in a big city like Toronto I feel like we’re all separate and “cool” and on our own.  The Love Confession Booth was testament to the fact that what many of us really want is connection, honesty, disclosure and good ol’ fashioned face-to-face communication.  It reminded me that the person standing next to me at a concert could be going through a break-up or trying to figure out how to tell their best friend that they’re in love.

Now, wouldn’t it be nice if we could all just cut to the chase and confess our LOVE truths on a regular basis? Perhaps a love booth ritual should come into practice? No, wait, better yet, perhaps we should all just tell our love truths to the people who need to hear them. Trust ourselves. Unburden ourselves.  Take risks.  Do what we already know in our hearts we want to do, and always, always, choose the deepest wildest truest most passionate love we can imagine.

We dare you, too. Buy a ticket to Stop Kiss and following the show, spill your love secrets over a bottle of red with a friend who cares.

Stop Kiss will be playing at the Tarragon Theatre throughout Fringe Fest. 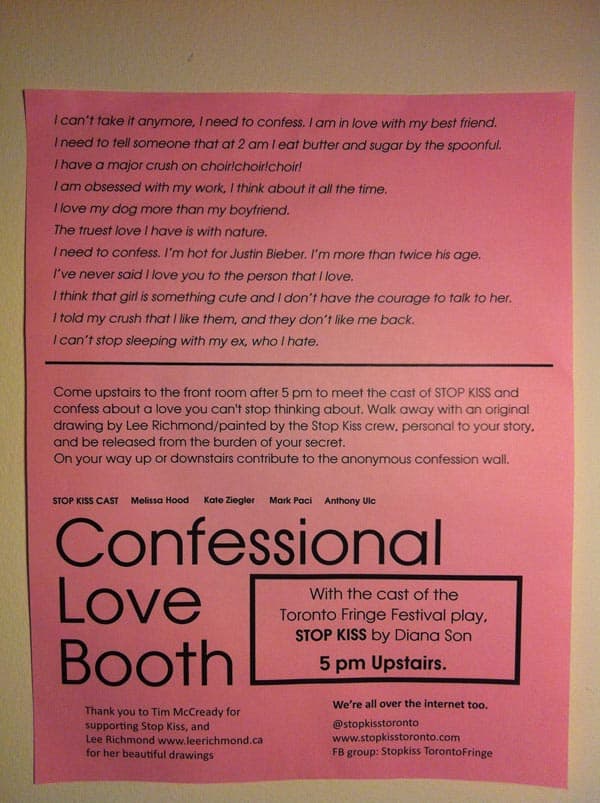