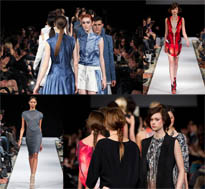 Fashion week is slowly turning into a two-week ordeal and Friday’s small, intimate shows were already the highlight of what’s to come next week. Focusing on British-Canadian designers, “The shOws” at the Ritz-Carleton offered us a fresh and international perspective, something fashion week could use more of. It’s fantastic to see Canadian designers with the guts to go to Central Saint Martin’s in London make it big.

Jean-Pierre Braganza
As I was riding the TTC to the fashion shows I was listening to Austra, thinking it would be great to have Katie Stelmanis’ music accompany a runway show. Lo and behold, there was Jean-Pierre Braganza opening his show with Austra’s “Beat and the Pulse”. The collection was geometric, fashion-forward and revealing with its lapel-less low-cut blazers. I couldn’t get over how effortless the models seemed with their fishtail hair that I want to emulate so badly.  Braganza is a designer ahead of his time; see the Style.com shows for evidence. Braganza was born in England and moved to Montreal as a child and lived in Toronto. Both Braganza and Todd Lynn worked for Roland Mouret before starting their own respective labels.

Todd Lynn
Todd Lynn moved from Ottawa to London in 1998. Now it’s difficult to talk about London’s fashion scene without the homegrown Canadian designer in mind. With Coco Rocha as ambassador, Todd Lynn brought lush silk, ripped seams and deconstructed garments held up by safety pins to a runway filled with energy. Lynn mixes soft with rock and roll in such a concise manner, it’s no wonder that some of his clients include Bono, Mick Jagger and Courtney Love.